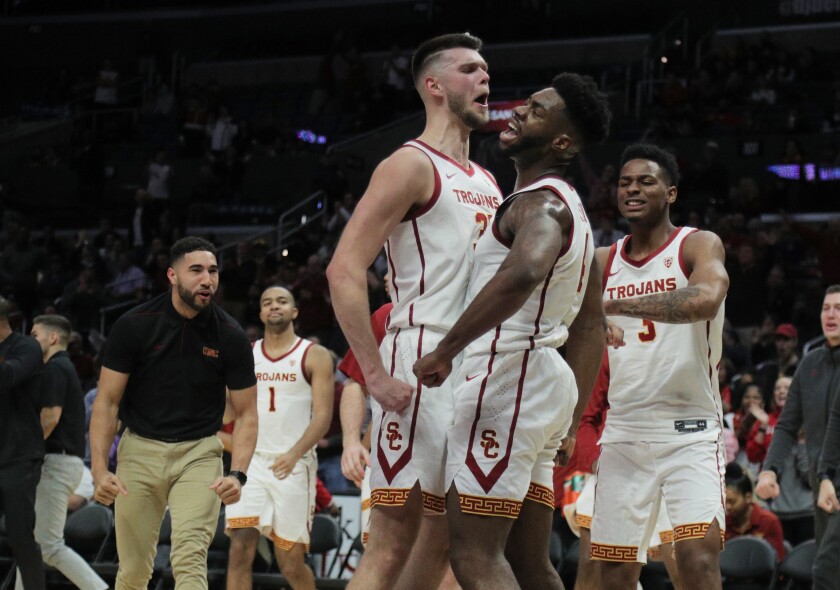 After seeing so many open shots clank off the rim, Ethan Anderson couldn’t help but celebrate. So when the freshman made a big three-point basket that put USC ahead by five points with 3 minutes 9 seconds to play against Louisiana State on Saturday in Staples Center, Anderson skipped twice down the court, swinging his arm in a circle.

Anderson said he was “so happy” after the shot, but the Fairfax High alumnus still wore a serious expression during the celebration. He never stops competing.

Behind clutch shooting from the point guard, USC hung on for a 70-68 victory over Louisiana State and secured a key win over a power conference team before Pac-12 Conference play begins in January.

“That’s what I expect as a head coach, our staff expects that, his teammates expect that — to come in and play like he did down the stretch because he’s a heck of a basketball player,” coach Andy Enfield said of Anderson.

“He makes freshman mistakes. However, we have confidence in him and we’re going to ride with our young guys.”

The Tigers (7-4) held Onyeka Okongwu to 10 points, but the Chino Hills alumnus got nine rebounds and four blocks, including the game-sealing play as he blocked Javonte Smart’s rushed shot from the free-throw line as time expired after USC senior Jonah Mathews missed the front end of a one and one.

Anderson was riding a shooting drought that extended over two games; he was 0 for 4 in USC’s victory over Long Beach State. He had open shots early but missed them. His confidence waned. As his frustration built, he drove into the lane, hoping to provide a spark with a big dunk. Instead, he got stonewalled.

But the coaching staff didn’t say much to the competitive freshman. This was a player from Carson who woke up every day at 5:30 a.m. to drive 45 minutes to go to school. He was the L.A. City Section player of the year after leading Fairfax to an Open Division championship.

“What am I going to tell a kid that’s done that? ‘You’re playing like crap?’ ” Enfield said. “No, I’m going to just let him be and when I put him back in the game, I expect him to show that toughness and that competitive spirit he showed throughout his whole high school career.”

Anderson said all the early wake-up calls and long drives were worth it because it got him in a much better position to be recruited for college.

He lamented Saturday, standing in a hallway in Staples Center, that he was ranked in the 300s as a recruit: 327th nationally, according to the 247Sports composite. He is an undersized 6 feet 1 and averaged only five points entering Saturday’s game, but he proved that the best skills can’t always be measured.

“I always play with a chip on my shoulder,” Anderson said. “Toughness is one thing that I can control always.”