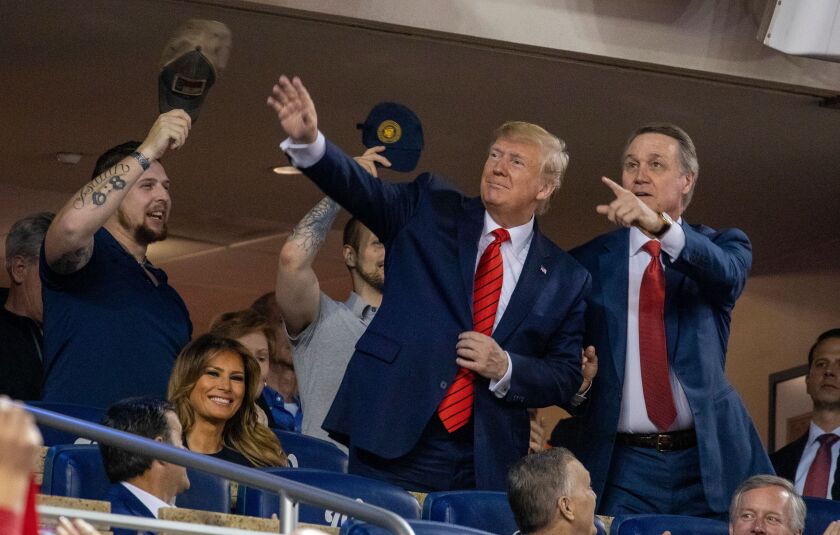 Fans greet Donald Trump with boos and chants of ‘Lock him up!’ at World Series

President Trump was greeted with boos and chants of “Lock him up!” while attending Game 5 of the World Series between the Houston Astros and host Washington Nationals on Sunday.

Trump arrived at the game minutes before the first pitch, as scheduled, sitting in the commissioner’s suite next to the First Lady, surrounded by Republican members of Congress and senior aides. Trump was introduced on the video board at Nationals Park between the third and fourth innings when military veterans were honored during a presentation the Nationals feature at every home game.

The veterans were presented to cheers before Trump was introduced on the public address system and greeted with sustained and boisterous boos. Trump clapped for the 13 seconds he appeared on the screens.

When the camera returned to the veterans, the crowd loudly cheered again. Moments later, a “Lock him up!” chant surfaced.

That wasn’t the only anti-Trump sentiment expressed by the crowd during the game. Two men seated in the fourth row behind home plate stood up in the top of the fifth inning and unfurled a blue sign with white letters that read: “VETERANS FOR IMPEACHMENT.”

The men were veterans of the Iraq War, their protest organized by a group called Common Defense, which opposes Trump.

In an interview before the game, they said they had no reservations about trying to get their message out.

“As veterans, we signed an oath, raised our right hand to defend the constitution against enemies foreign and domestic. Its gotten to a point where we see our president [violating] his oath,” said Alan Pitts, 36, who was shot and wounded during a tour in Ramadi in 2004 and now lives in Colorado Springs.

“It’s a huge television audience, so we figured what better place to get our message out to the masses.”

Trump, who faces an ongoing impeachment inquiry by House Democrats, announced late last week that he would attend Game 5, and followed through despite the knowledge that he would likely be serenaded with boos by the crowd. It was Trump’s first Washington sporting event since he took office in January 2017. He left the game at 10:50 p.m. EDT during the eighth inning of the Astros’ 7-1 win.

Hearing that Trump would be in the stadium, Common Defense, founded in 2016 to oppose Trump, came up with the idea of a dramatic World Series protest and enlisted the two veterans, both of whom have been actively involved with the group’s organizing and lobbying efforts, to carry it out.

The protest came just hours after Trump celebrated having authorized a successful special forces mission in northern Syria that led to the death of ISIS leader Abu Bakr Baghdadi.