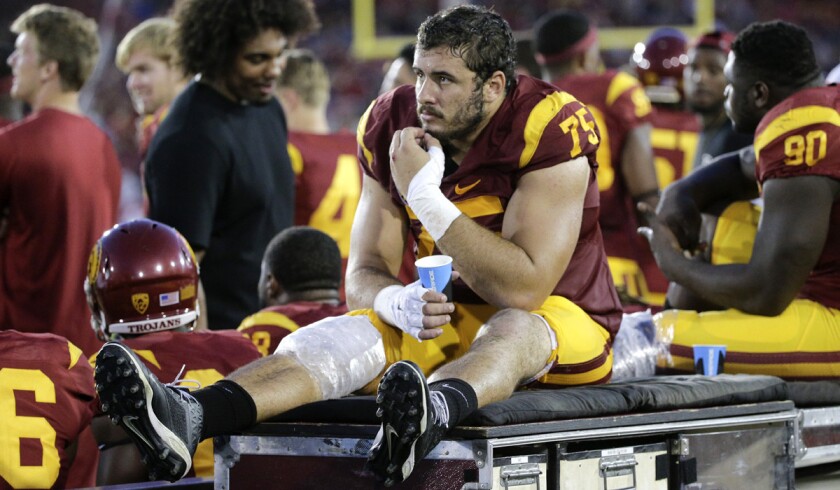 It was a Father’s Day weekend hike, a chance for Max Tuerk to spend time on the trail with people he loved.

Early Saturday morning, Tuerk, his father, Greg, and his mother, Val, climbed the Bell View trail to Los Pinos Peak in Orange County. The trek was longer than the hikes Max, a former USC and NFL lineman, and Val took almost daily during the last two months.

“We were going to face the beast,” Greg said.

The ascent to the peak was difficult, but Max showed no outward signs of distress. On the descent, however, the family stopped a few miles from the trailhead, and another group provided Max with water.

A short time later, as he led the way down the mountain, Max turned around.

USC coach Clay Helton on Max Tuerk: “An unbelievable leader ... he could go to somebody individually and spend time with them and give them his time and his experiences.”

As Val hurried down the trail to retrieve more fluids, Greg and Max continued for a short time. But with Max still struggling, Greg decided to call 911. He then performed CPR on his oldest child as he awaited a helicopter that was sent to airlift Max to the hospital.

Paramedics and firefighters arrived and worked to revive Max. But it was too late.

When Greg and Val arrived at the hospital, they were met by a spiritual counselor.

In the hours since, the Tuerks said they had been comforted by the outpouring of love and support they had received from all facets of their close-knit Trabuco Canyon community, and from Max’s former teammates and coaches at the Pop Warner, high school, college and NFL levels.

“It’s just been beautiful,” said Val, who added that their family had found some solace in that Max had died “doing something he loved with people that he loved.”

A date for a public celebration of life for Max is pending.

On Monday afternoon, the Tuerks said they were still awaiting preliminary autopsy results. But the family, which also includes son Drake and daughters Abby and Natalie, had already made arrangements to have Max’s brain sent to Boston University’s CTE Center.

“That was very important to us,” Val said, “because we feel that CTE probably had some impact on Max.”

Max starred at Santa Margarita High, and he was a freshman All-American and four-year starter at USC. He was selected by the Chargers in the third round of the 2016 NFL draft.

But he struggled to overcome a knee injury that cut short his senior college season. He was not active for games during his rookie year and was suspended by the NFL for the first four games of his second season for violating the NFL’s policy on performance-enhancing substances. He was released by the Chargers, and played one game for the Arizona Cardinals in 2017 before his NFL career ended.

Greg and Val said Max had struggled with latent signs of mental illness during and after his pro career.

“We think that it’s important for it to get out that there is a connection between CTE and mental illness,” Val said, adding, “That’s had a big impact on his experience in the NFL and his life since the NFL.

“It’s a beast and he was really fighting it and doing really well. But from what we understand from speaking to other people who have experienced the same things, it’s not uncommon for those types of issues to be associated with CTE.”

Said Greg: “We have incredible memories of things he did athletically, but man, he was a true warrior to the very end with this mental illness. … It doesn’t make headlines and nobody wants to hear about it, but he needs to be admired for that as much as for anything else.”

Former Santa Margarita coach Harry Welch said he was preparing for a Father’s Day breakfast with his wife, Cindee, on Sunday when his cellphone rang. It was Greg.

Welch said he last spoke with Max a couple months ago, at a fitness center.

“He was walking and running a lot and working out,” Welch said. “He looked great. He had lost a lot of his football weight and would come up, ‘Hi, Mrs. Welch, hi, Mr. Welch.’ He was always the friendly, loving giant we knew.”

Welch said Max had arrived at Santa Margarita as a tight end who hoped to play slot receiver. But after a few workouts, line coach Marty Spalding thought otherwise.

“We told Max he would not be catching touchdown passes,” Welch said. “He could cease his dreams of catching footballs in college but had the potential to be one of the premier offensive linemen. He continued to grow and improve.”

“He came out four times to take video and with his Cajun drawl would say, ‘He’s a maula, coach.’ What’s a maula? ‘He’s mauling other players,’ ” Welch said of Orgeron.

In 45 years of coaching, Welch said he had seen lots of outstanding linemen, including Randy Cross and Brent Parkinson, standouts at UCLA and USC, respectively. But ...

“Max Tuerk was the greatest high school offensive lineman I had ever been around,” he said. “His work ethic, his intensity, his feet, his hands, his speed, his aggressiveness. He was second to none.”

When Tuerk signed a letter of intent to play for USC in 2012, he could not have anticipated four years of tumult.

At the time, Lane Kiffin was the head coach, Orgeron the recruiting coordinator and defensive line coach, and Clay Helton the passing game coordinator and quarterbacks coach. By the time Tuerk finished his career, all three would serve as his Trojans head coaches, along with Steve Sarkisian.

“He was the definition of the greatest gift you can give somebody is your time — he gave people his time,” Helton said. “He was an unbelievable leader in the fact that he could go to somebody individually and spend time with them and give them his time and his experiences.”

As a USC freshman, Tuerk was a reserve early in the season but started the final five games at left tackle — the first freshman in Trojans history to start at the position. Tuerk’s toughness and character stood out, Orgeron said.

“Great young man, I loved him,” said Orgeron, USC’s interim coach in 2013, who guided Louisiana State to the national championship last season. “He was, ‘Yes sir, no sir.’ Always smiling, and a hard worker.”

Graf said Tuerk caught on immediately and embraced being part of a close-knit group of offensive linemen.

Graf said he attended the Stagecoach Festival for country music and more with Tuerk multiple times, and that all of the linemen bonded during dinners and position-group outings.

“He wasn’t so much a leader by ‘Rah-Rah,’ ” Graf said. “He would lead by example. ... He was a passionate guy and put everything he had into the game and his relationships outside of football.”