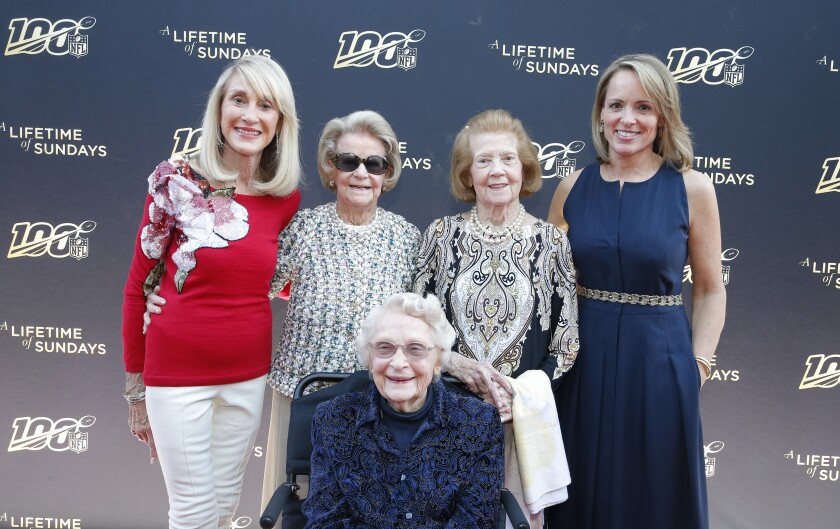 They have stories to tell, a vault of them about the country’s most popular sport. But the matriarchs of four American football families are reluctant historians, uncomfortable stepping into the spotlight.

“Little did I know, the hardest part of the project was getting these four women to say yes,” recalled Jane Skinner Goodell, co-executive producer of the NFL Films documentary “A Lifetime of Sundays,” which will make its debut Sunday on ESPN at 10 a.m. PT.

“They come from a generation of `we,’ which is all about family and community and team. And we’re all used to living in a generation of ‘me,’ which is about, `Use your voice,’ take selfies, show off. I describe them with a word you don’t hear a lot these days, and that’s ‘modest.’ ”

The 90-minute film explores the history of the game through the eyes of these women, affectionately deemed the “Fab Four of Football,” and includes interviews with them, family members, players and coaches, plus rare archival footage.

It’s poignant — especially so when McCaskey talks about Brian Piccolo and her family’s love for that cancer-stricken Bears running back — as well as funny and informative.

“It’s a football movie, but it also has potential to resonate beyond football fans,” said Goodell, wife of NFL Commissioner Roger Goodell.

The project was born out of a panel at the league’s 2018 annual meeting, when the four women finally agreed to tell their stories to an audience of NFL employees, owners and spouses.

“Roger called me two days before, and he said, ‘You’re messing up our meeting. I’m trying to have all the owners in the room for a closed session, but they’re all telling me they want to listen to the Fab Four,’ ” Goodell said.

The commissioner ultimately changed the time of his meeting, and the women told stories for nearly two hours and wound up being the talk of the gathering.

“After we finished, people in the audience came up and asked the women for selfies,” Goodell said. “They said, ‘You’ve been a big inspiration to us.’ That, to me, was a big turning point. They needed to understand that there is an audience who’s very hungry for their stories and their wisdom.

“After the panel ended, Mrs. McCaskey came up to me and said, ‘I’m sorry we gave you a hard time. I think we now understand that people want to hear maybe about these lives that we’ve lived.’ And she said, ‘I’ll do whatever you want.’

“A Lifetime of Sundays” will re-air Sept. 1 at 12:30 p.m., and will be available on ESPN-authenticated video on demand until Sept. 15, when it will move to ESPN+ and be available for streaming.