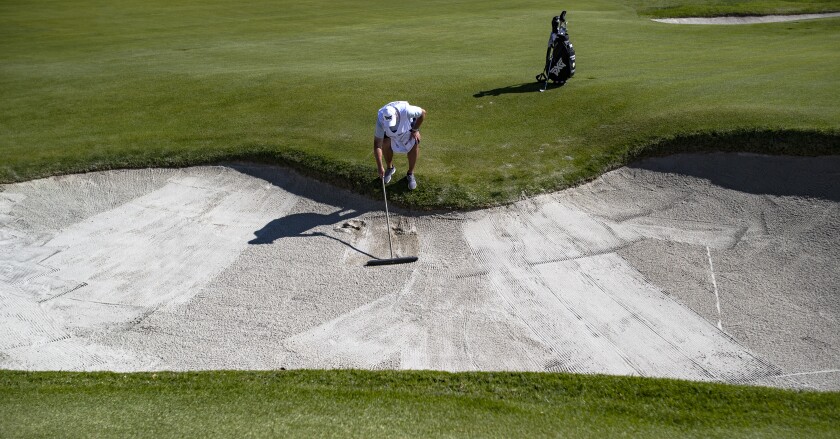 It might seem like a dream job, wearing shorts in the sunshine and walking the verdant fairways of the most beautiful golf courses on the planet, sometimes for big paychecks.

But being a PGA Tour caddie can be a drag, too. And there’s a lot of smoothing over for your pro. The most mundane part of the job is among the most important: meticulously raking a sand trap after a golfer has hit out of it.

“If you’re a neat freak, which some of us are, which I am, you want to make sure it looks really good, better than it looked when it was raked by machine in the morning,” said caddie John Limanti, on the bag for Adam Scott, who shot 64 at Riviera on Friday for the lowest second round of the Genesis Invitational.

Aesthetics are only a small part. A good rake job can mean the difference between a red number on the leaderboard and a golfer seeing blood red.

“If your ball plugs in the bunker, you accept it because generally it’s part of the game,” said Justin Rose, who shot a 69 on Friday. “But if you walk into the trap and see a poor rake job, it’s frustrating for sure.”

The differences between a gentle raking hand and a rushed hack job are not always apparent to the unpracticed eye.

“A bad job leaves ridges,” Rose said. “It pushes the sand into little waves, almost like the ocean with a 5 mph wind, just a tiny swell. To the undiscerning eye, it might look like a clean lie. But if you put a bit of raised sand behind the ball, it changes drastically what you can do with the golf shot. The ball’s going to come out lower with no spin, versus if you’re on the upside of the wave you can nip it better. Those little discrepancies make a huge difference.”

The unspoken rule among caddies is to leave a trap better than you found it. Typically, that means using both sides of the rake — the teeth and the rounded top — to spread the sand as evenly as cake icing.

“Some guys really take pride in it, and you should,” said Dale Vallely, caddie for Abraham Ancer. “You want to give the next guy the same lie that you got. If you’re not taking your time [when raking], you’re not doing your job.”

Coarse sand like that at Riviera tends to be easier to rake than the finer stuff. And whereas it’s not as important to rake fairway bunkers in one consistent direction, it’s essential that the rake strokes in greenside bunkers are all made in the direction of the green.

And you never, ever leave a stray footprint in the sand.

“That’s the worst,” said Michael Collins, a former tour caddie who now writes for ESPN.com. “If that happens on tour, they find out who did it, and the player gets fined. The player’s responsible for it. It’s a very rare occurrence, but it’s happened.

“Footprints. In those cases, it feels like if you were in front of a judge, any assault charges would be dropped ... if the judge plays golf.”

Then, there’s the issue of sandy footprints on the green. Pros are typically careful about not leaving those, but their efforts to clean their shoes sometimes go awry.

“Most guys are really good about banging the sand off their shoes,” Collins said. “The funny thing is, when a guy hits a great bunker shot, he’ll tap his shoes the cool way. Like Phil [Mickelson] puts one foot up across his knee and bangs it off like, `Hey, thanks, everybody.’

“But when they hit a bad bunker shot, a lot of times they’re trying to slam the club into their foot. Lot of ankles hit that way. And there’s no worse pain than a wedge hitting your ankle.

“Guys will go to hit the front of their foot and miss, and hit themselves in the shin. As a caddie, you can’t laugh. But you want to, because you’re like, `'Yeah, that’s what you get for hitting a bad shot. And you’re costing me money too, fool.’ ”

A caddie is left to clean up the mess. The goal is nothing short of perfection.

Of course, sand traps are supposed to be punitive. They’re hazards. Still, professional golfers are so skilled that they sometimes aim for bunkers, knowing they’re likely to get a good lie for a smooth shot out of them.

In 2006, Jack Nicklaus started experimenting with more rudimentary rakes for the Memorial Tournament at Muirfield Village. There, the bunkers were outfitted with widely spaced and long-toothed wooden rakes, as a replacement for fine-toothed ones. The result was deeper furrows, more inconsistent lies, and an enhanced challenge. Several tournaments made similar changes.

“Golfers are getting better and better, hitting it longer and longer,” caddie Ron Levin said. “Everything is about doing what they can do to protect these courses from that.”

Raking a trap isn’t as easy as it looks. Author Rick Reilly learned that on the biggest stage, when — in his first assignment as a caddie — he was on the bag for Tommy Aaron. It was hands-on research for Reilly’s 2004 book “Who’s Your Caddy?”

It was there at Augusta National that Reilly suffered a withering indignity.

The trap that he thought he had raked so well had to be re-raked by caddie Fanny Sunneson.

“On the fifth hole, Tommy hit into a fairway bunker,” Reilly recalled. “He comes out, and I know enough to rake, so I do my rake job. Try to do the best job I can. I put the rake to the side, and I notice he’s not moving. He sort of looks at my job, then he looks at Fanny. Nods to Fanny, nods to the rake job, and she jumps right on it.

“She did the most beautiful job. It looked like the day that bunker was built. It was perfect. Pristine. You could lay down and have a nap in it.”

After seeing that, he understood.