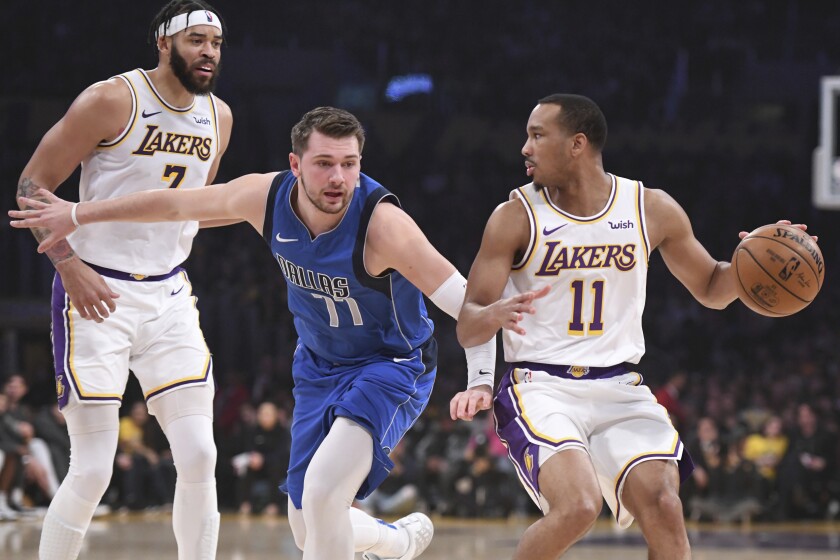 For Lakers, it was a December to remember despite their first taste of adversity

It was a daunting December for the Lakers because so many of their opponents were formidable and they were on the road for so many games.

For the most part, the Lakers withstood the challenges, even overcoming their first real taste of adversity in the form of a four-game losing streak.

When it was all said and done, the Lakers completed the month with a 9-5 record, which left them at 26-7, best in the Western Conference and second best in the NBA behind the Milwaukee Bucks (29-5).

After the Lakers defeated the Dallas Mavericks on Sunday night at Staples Center, Coach Frank Vogel said his team played “lot of games against good teams” in December, and the overall performance was “very good.”

“We feel like we missed some opportunities right before Christmas, but overall a really good month and one that we knew was going to be a very difficult one, a lot of teams with winning records and a lot of games on the road,” Vogel said. “So we’re definitely happy with how we performed. On to 2020.”

If there was a weak spot in December, it was their performance against teams with winning records, going 4-5.

They lost to Dallas to open the month and had four losses in a row to Indiana, Milwaukee, Denver and the Clippers on Christmas Day.

On the bright side, the Lakers went 7-2 on the road in December, improving their mark to 15-3, best in the NBA.