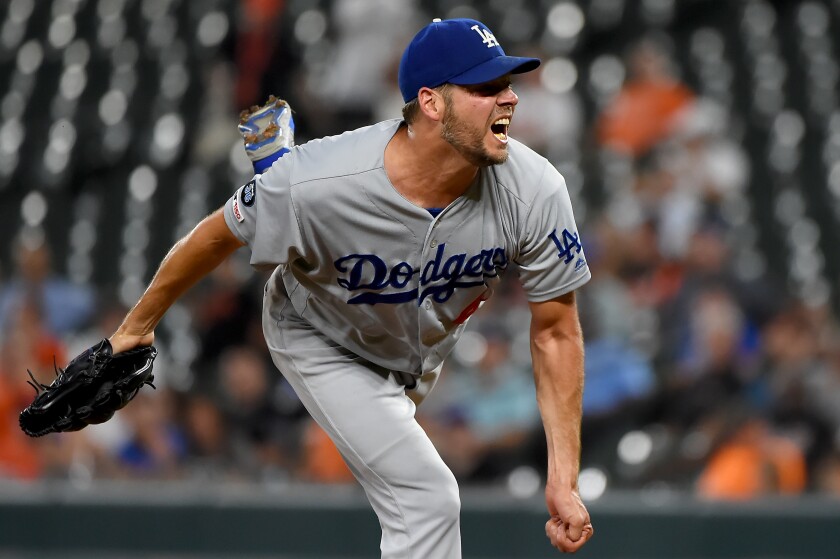 A week after Hyun-Jin Ryu’s tenure with the Dodgers ended, the club lost another prominent left-hander Tuesday when Rich Hill agreed to a one-year contract with the Minnesota Twins. The deal is reportedly worth $3 million guaranteed with another possible $9.5 million in incentives.

The Twins signed Hill knowing he won’t be ready for the start of the regular season after undergoing primary revision surgery in October to repair a tear in the ulnar collateral ligament in his left arm. He would be expected to return next season after his 40th birthday, perhaps as the oldest pitcher in the majors.

The ligament surgery is the latest setback in an improbable career that reached its nadir in 2015, when Hill pitched for the Long Island Ducks of the independent Atlantic League. He finished the year with the Boston Red Sox before signing with the Oakland Athletics and establishing himself as one of the best starters in the majors during the first half of the 2016 season.

The Dodgers acquired Hill that summer and re-signed him to a three-year contract in the offseason. Blisters tormented Hill early in his time with Los Angeles. Other maladies plagued him in 2019. A medial collateral ligament sprain put him on the injured list for the campaign’s first month. He suffered a flexor tendon strain in June and missed nearly three months. His MCL was reinjured in his first start back in September, but he returned 12 days later and made the Dodgers’ postseason roster.

Hill was effective when healthy. He went 30-16 with a 3.16 earned-run average in 69 regular season appearances — 68 starts — for the Dodgers. His 3.00 ERA since the start of the 2016 season ranks sixth in the majors among starters with at least 400 innings. Only Clayton Kershaw, Jacob deGrom, Max Scherzer, Justin Verlander and Corey Kluber were better.

The Twins, a surprise playoff team in 2019, are banking on Hill returning to that level, or at least close to it. It’s a risk the Dodgers evidently weren’t willing to take at that price.

Hill insisted he wanted to return to Los Angeles, and Dodgers president of baseball operations Andrew Friedman said there was interest in a reunion. Instead, the Dodgers lost another member of its stout rotation. They’re left with Walker Buehler, Kershaw, Kenta Maeda and Julio Urias as projected starters. Ross Stripling, Tony Gonsolin and Dustin May are the leading options for the fifth spot.

The Dodgers’ only significant recent acquisitionhas been reliever Blake Treinen. For now, their offseason has been an inactive one marked by the losses of two fan favorites and important members of their pitching staff.