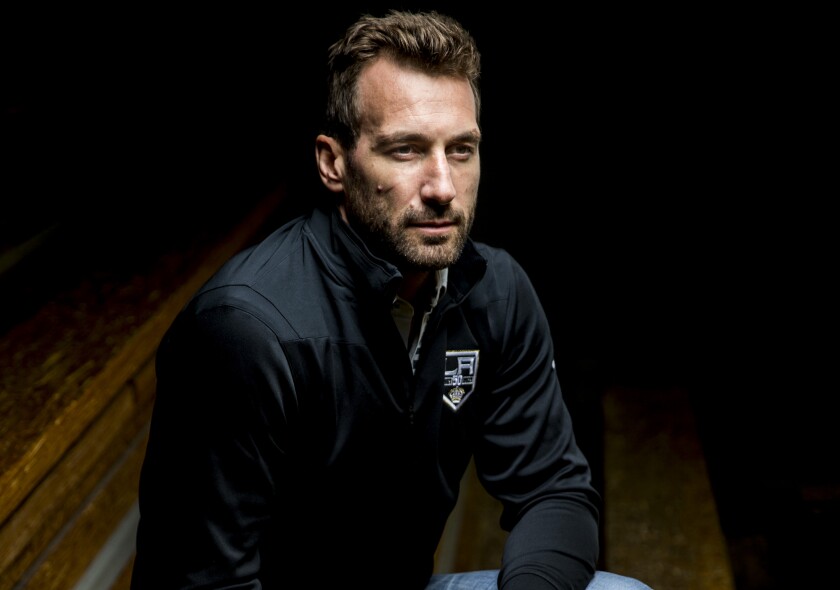 Every time rookie center Jaret Anderson-Dolan lined up for a draw during his four-game call-up with the Kings last week, Jarret Stoll leaned forward in his chair. He wanted to see how their hard work together would pay off.

“Every time he takes a faceoff in the NHL, and he wins one, I’m so proud,” Stoll said of Anderson-Dolan, one of the players he has worked closest with this season in his role on the Kings’ player development staff. “On the other hand, when he loses one, I’m like, ‘. . . . come on.’ I want him to do so well.”

Four years removed from the end of his 13-year NHL playing career, Stoll is around hockey as much as ever these days — as a Kings player development coach, as an analyst on Fox Sports West Kings broadcasts, and as a front-facing ambassador of the franchise.

Of all his duties, Stoll’s relationships with players — including prospects such as Anderson-Dolan, Matt Luff, Carl Grundstrom and many others — are what he cherishes most.

“We want to see our kids develop,” he said. “That’s what it’s all about. Getting them to the next level and eventually, hopefully, they become full-time NHL players. If they score a goal, or make a nice play, or get an assist, it’s so rewarding for us to see that.”

After retiring in 2016, Stoll was lured back to the Kings — for whom he spent seven seasons and won two Stanley Cup titles — by former general manager Dean Lombardi.

Like fellow player development staffers Glen Murray, Mike Donnelly, Sean O’Donnell, and Craig Johnson, Stoll isn’t technically part of the coaching staff and doesn’t focus on systems or positioning. Rather, he spends time with players on the Kings and their AHL affiliate, the Ontario Reign, developing their skating, faceoff, and stick skills. He gives them one person to fall back on.

“We’re there [for the players] as a friend, we’re there as someone who, if they’re having troubles or are in and out of the lineup, they feel comfortable enough to come to us and talk about their game,” he said.

A fan favorite and media darling during his playing days, Stoll’s affable personality has translated to his new responsibilities on the ice, in front of a camera and among the team’s fans.

“Growing up, I watched Stolly a lot,” said Kings prospect Gabe Vilardi, who worked extensively with Stoll earlier this season while recovering from a long-term back injury. “How he plays, he did all the little things right. So you listen to what he says. It’s not like he’s trying to change your game or anything. It’s the little things that you do to improve to your game, get more ice.”

O’Neal credits the same traits for Stoll’s seamless transition to broadcasting (the same profession as his wife, Fox reporter Erin Andrews), where he meshes a welcoming presence with expert explanation of the game.

Stoll isn’t sure what his future holds. TV is one possible path, he said, although coaching might interest him more. He’s perfectly happy for now with his role.

“This is exactly what I wanted to be doing after my career was done,” he said. “I love coaching, guiding guys. Just trying to get them better, make them become regular NHL players.”