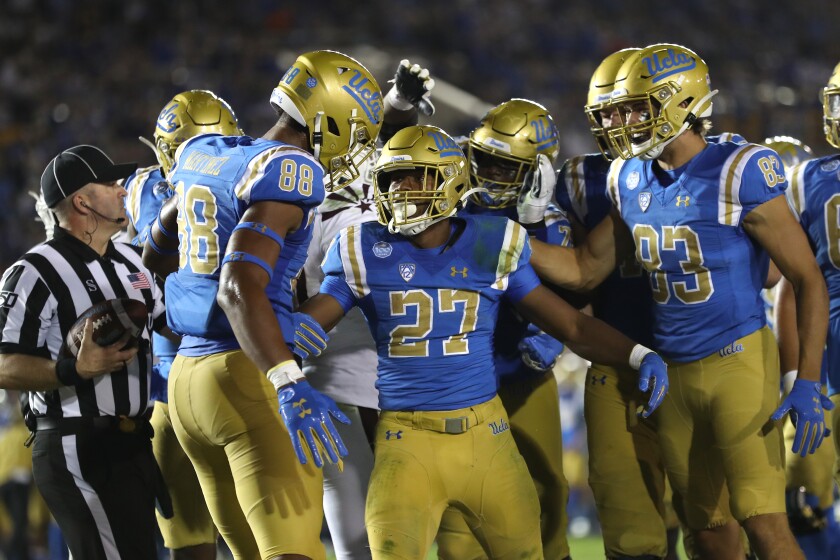 Grass stained Ethan Fernea’s blue jersey on his left shoulder and above his name plate on his back as the receiver walked off the Rose Bowl field Saturday. The green marks were well-earned scars from his long-awaited career day.

Fernea, a former walk-on, was UCLA’s leading receiver in its 42-32 win over No. 24 Arizona State with three catches for 45 yards. The senior who was awarded a scholarship and the No. 36 jersey before the season in honor of former UCLA receiver Nick Pasquale called contributing on offense for UCLA at the Rose Bowl a “surreal feeling.”

“I’ve been dreaming about making catches in the Rose Bowl for a really long time now,” the 5-foot-11, 197-pound senior said.

Fernea has played in all eight games this year, solidifying his position as a special-teams stalwart, but didn’t have a catch this season until he converted on fourth and three in the second quarter. The high-pressure down was nerve-wracking, Fernea acknowledged. But quarterback Dorian Thompson-Robinson didn’t hesitate to throw to Fernea out wide against man coverage.

After years of toiling in the background, Fernea has earned his teammates’ trust in the biggest moments.

“Fern embodies everything as a Bruin: trust, accountability, hard work, preparation,” running back Joshua Kelley said. “It’s just great to see guys like that who are really great human beings — they work hard consistently, you see it every day — to go out and shine like that. So Fern, I love that guy.”

Saturday wasn’t Fernea’s first clutch catch for the Bruins. He had a 15-yard reception on a fake punt last year in UCLA’s 42-21 loss at Oregon.

Fernea was awarded a scholarship the day after UCLA wrapped training camp this August. He came to UCLA under former head coach Jim Mora’s coaching staff and after three seasons as a walk-on with a fourth year approaching, he started to lose hope that he would ever earn a scholarship.

Then coach Chip Kelly called him to break the huddle after a meeting.

“All he’s ever wanted was a shot,” Kelly said, “and when he’s gotten his shot, he’s taken advantage of it.”

Each of Fernea’s three catches Saturday resulted in first downs and led to touchdowns as UCLA rolled to a 42-10 lead. Fernea came close to notching his first career touchdown as he caught a short pass from Thompson-Robinson and ran 29 yards into the red zone before getting tripped up at the seven-yard line.

While Fernea relished his on-field role in helping UCLA earn its first home win of the season, he proudly represented the No. 36 jersey worn by Pasquale before the former receiver died in 2013. Pasquale was celebrated by teammates for his hard-working and positive attitude. Fernea is the first in a new tradition of Bruins to wear the number in Pasquale’s honor.

“Getting that No. 36 jersey was a big honor to me,” Fernea said. “It made me really want to keep working hard and be the best teammate I can be and try to bring positivity every game.”