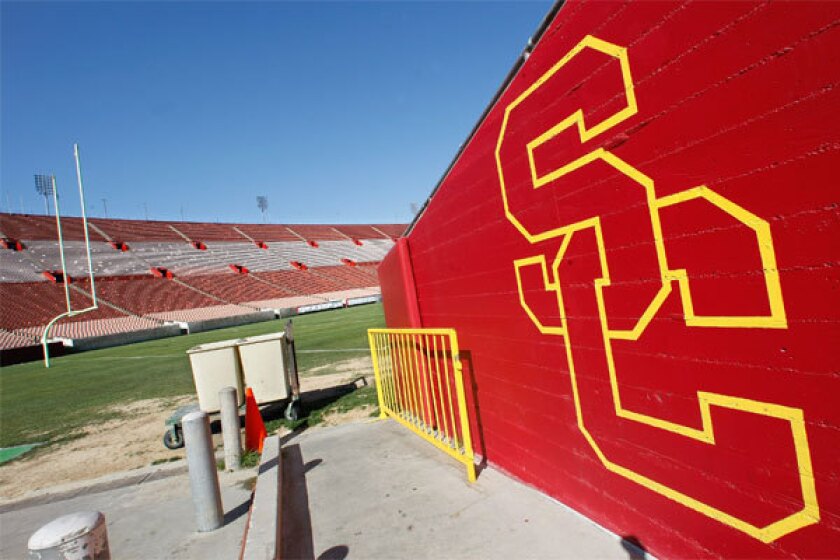 Phil Krueger, who helped build a dominant defense as an assistant coach for 1967 national champion USC and later became part of the first coaching staff of the Tampa Bay Buccaneers, has died. He was 90.

Skilled in all phases of the game, Krueger coached offense, defense and special teams during more than three decades in the NFL and college. He was the head coach at Fresno State and Utah State, going 31-22, and an assistant at Illinois.

Krueger moved from the field to Tampa Bay’s front office and spent 10 years as an executive, where he was known as a skillful contract negotiator. He was hired as the Buccaneers’ first general manager in 1991 — prior to that, the team’s coaches made the player decisions.

Gibbs and Krueger were hotel roommates when Southern Cal played on the road.

“I have a lot of great memories from being on the same coaching staff with Phil,” Gibbs said this week. “He was very bright. A sharp guy with a great sense of humor. He was one of those guys that you always enjoyed being around.”

USC sent an email to Trojan Athletic Fund members Wednesday laying out instructions for fans to decide whether to opt-in or out of their season football tickets in 2020.

Krueger’s career path was set early on when he switched from grammar to the gridiron. He was teaching English at a high school in Arizona when he took over the football program, and later landed a job as an assistant coach at Long Beach City College.

“My favorite coach of all time,” former USC and longtime NFL linebacker Charlie Weaver said Saturday from his home in Fresno. “He recruited me out of junior college and I couldn’t wait to get to USC to play under the tutelage of Coach Krueger.”

In 1970, Weaver, Krueger and the Trojans were part of one of most significant college football games ever. A fully integrated USC squad went to Birmingham and beat Bear Bryant’s all-white Alabama team 42-21 in a matchup not nearly as close as the final score indicated.

“Coach Krueger had us prepared to play. It was a beatdown,” Weaver recalled.

Part of the vaunted “Wild Bunch” defensive front at USC, Weaver said he stayed in touch with Krueger after their college days.

Krueger joined McKay in 1976 with the expansion Buccaneers as an offensive backfield assistant, and they endured an 0-14 season. Krueger was coaching linebackers the next year when the Bucs started out 0-12 before finishing with two wins, including a victory over St. Louis in the final game.

Gibbs was on that Cardinals staff and was let go after the season. Krueger helped pave Gibbs’ move to Tampa Bay.

Krueger worked on special teams when the Bucs made their first playoff appearance, reaching the NFC title game in the 1979 season, and became an assistant to owner Hugh Culverhouse in 1981.

Krueger left the Bucs after one season as GM, but didn’t give up football. After moving to Florida to be near his daughter, Krueger spent three years as a consultant to a pro team in Tokyo, the Kajima Deers.

Born in LaSalle, Ill., Krueger grew up in St. Louis and played football at Southeast Missouri State. He was a first lieutenant in the Army, serving in the Korean War and earning the Bronze Star.

“Phil Krueger was tough ... the reason I couldn’t get a date in high school (that’s my story),” daughter Kristi Krueger, a longtime anchor at WPLG-TV in Miami, posted on Facebook. “But my friends loved `Big Phil’ and he loved them. Dad was a brilliant writer and the reason I love poetry.”

Krueger is survived by his wife of 59 years, Kathy, daughter Kristi and two grandchildren. The family asked that memorials be made in the form of donations in Krueger’s name to the Alzheimer’s Assn.