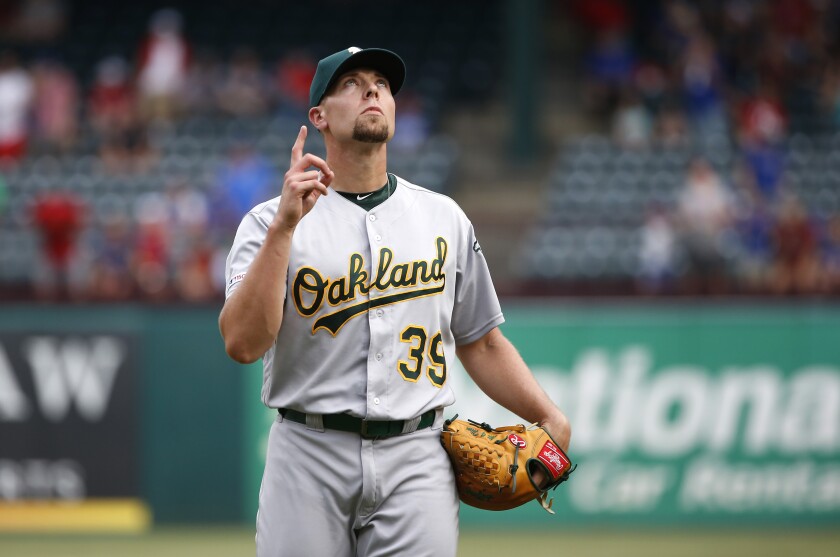 Before the anger raged and the jobs were lost, before the Houston Astros became vilified and the Dodgers felt cheated, Mike Fiers made a decision. His choice to go on the record with a reporter accusing the Astros, his former team, of illegally using technology to steal signs during their championship season in 2017 rocked the baseball world. It also was met with criticism.

On Saturday, Dodgers right-hander Blake Treinen, who signed with Los Angeles this winter and was Fiers’ teammate with the Oakland Athletics last season, shot down the critics.

“I respect Mike a lot and I think there’s this idea that that’s kind of normal across the league, what’s happened over in Houston, and it’s not normal,” Treinen said at the Dodgers’ FanFest. “I don’t think people really have the true idea of what normal is in the league. I respect him for what he said. I mean, what’s worse: him knowing about it and not saying anything to his teammates and going out there with an unfair advantage or saying something so that we really know that’s true?”

Fiers, 34, has spent parts of nine seasons in the major leagues. He has thrown two no-hitters and owns a 4.02 career earned-run average. Last season, he went 15-4 with a 3.90 ERA for Oakland. He is an effective starting pitcher and Treinen maintained he will not find trouble fitting into future clubhouses for his decision to go public.

“Mike’s a solid guy,” Treinen said. “Anybody that’s played with him respects him.”

Plenty of people in Houston don’t feel that way. Dodgers pitcher Ross Stripling calls Houston home and spent much of his offseason there. He estimated half the people he spoke with about the situation in Houston believed Fiers was a snitch. He said the Astros’ championship in 2017, months after Hurricane Harvey devastated the city, rallied people and helped rehabilitate the region.

Now that World Series victory over the Dodgers is tainted, that three managers and a general manager were fired, that legacies have been altered, and that the ramifications will continue. Stripling and Treinen, like so many other big leaguers, believe the sport is better for Fiers’ decision.

“I think people mostly should be happy maybe that Fiers said it, even though it kind of opened up this whole can of worms and is a black eye on MLB,” Stripling said. “It’s something that needed to be addressed and I hope that guys aren’t too upset with him even though he probably has a reputation of being almost like a whistleblower-type now.

“Kudos to him for taking that on and bringing that to light.”