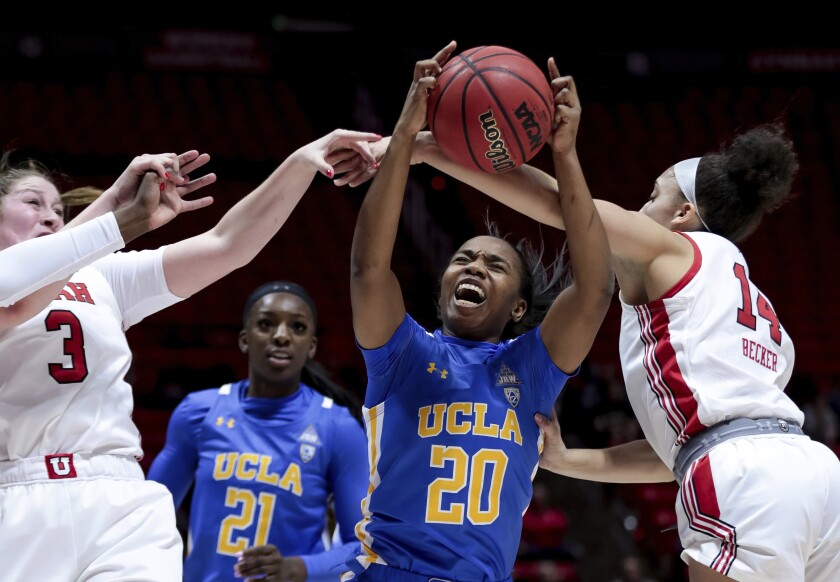 Michaela Onyenwere led the team in scoring, Chantel Horvat had her first double-double, but the play of the game belonged to Charisma Osborne.

In UCLA’s win over then-undefeated Arizona on Jan. 5, Osborne sprinted from one side of the baseline to the other, tracking a loose ball off a missed three-pointer on the first possession of the third quarter of a tied game. When most seemed content to let the ball trickle out of bounds, Osborne dove to save it to her teammates.

Those are the plays the freshman loves the most.

“Anybody can score the basketball,” Osborne said this week, “but a lot of people don’t try to do the little things on defense.”

McDonald, a 5-foot-6 guard who averages 20.5 points per game, is “probably the fastest player in America with the ball in her hand,” UCLA coach Cori Close said.

In the game 3/12 weeks ago, the Bruins, led by Osborne, limited McDonald to 19 points on seven-for-20 shooting in UCLA’s 70-58 win in Pauley Pavilion.

Osborne’s diving save to start the third quarter sparked the win as UCLA went from a tie game at halftime to a 19-point lead in the fourth quarter. The offensive rebound led to a second-chance three-pointer from Lindsay Corsaro.

UCLA is seventh in the nation in offensive rebounds with 16.5 per game.

“If we want to be a great road team, you have to control possessions and a big part of that is rebounding,” Close said.

The Bruins aim to grab 45% of rebounds off their own missed shots. The number comes from studying Final Four teams from the last eight years.

Osborne’s 53 offensive rebounds rank second on the team. When Osborne, UCLA’s third-leading scorer with 10.6 points per game, was struggling on offense against Washington — scoring just five points on two-for-10 shooting — she responded with a career-high 12 rebounds.

Two boards came in the final 25 seconds of overtime, one off a missed free throw from Washington and an offensive rebound off her own missed free throw as the Bruins held the Huskies off by five points. Osborne averages 5.8 rebounds a game.

“That’s when you really learn about a freshman,” Close said. “If it doesn’t go her way offensively, will she still be as committed to defensive rebounding and in fact, she has. I think that speaks well for who she is and will continue to become as a competitor. … The sky is the limit for her.”

Close said she hasn’t seen a defender as skilled at keeping opponents in front of her since former point guard Jordin Canada, a two-time Pac-12 defender of the year. Canada, a second-year pro with the Seattle Storm who led the WNBA in steals (2.27 per game) in 2019, shares a high school alma mater with Osborne.

“Maybe it’s something in the Windward water,” Close joked.

In her first college season, Osborne has already earned the designation as UCLA’s best defender. Senior guard Japreece Dean awarded her with an imaginary crown as UCLA’s queen of defense. The 5-foot-9 Osborne is strong and athletic, with a sharp basketball IQ, Dean said, but her greatest asset as a defender is her mentality.

“Not everybody has that,” Dean said, “and I admire that about her just to be able to go out and defend the best player night-in and night-out.”