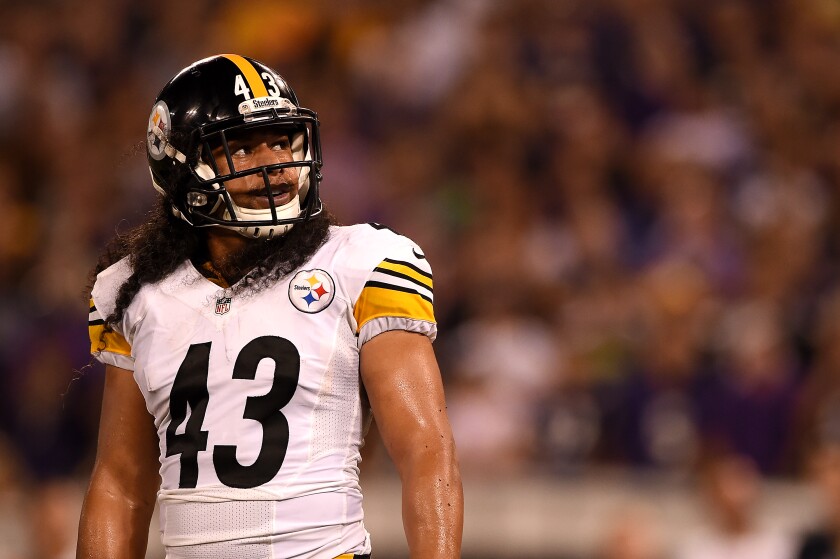 From USC to the Hall of Fame: Troy Polamalu was a ‘once in a lifetime player’

It was the seventh game of Troy Polamalu’s 2003 season, and the Pittsburgh Steelers rookie safety was struggling to find his confidence while playing for one of the NFL’s most storied franchises.

Against the St. Louis Rams and their “Greatest Show on Turf” offense, he finally made a play against Isaac Bruce, one of the best receivers in NFL history.

“It was a really hard tackle to make,” Polamalu, an All-American at USC, said Saturday. “And I was able to make it on the ‘Greatest Show on Turf,’ and it was like ‘Man, I think I can do this.’

“It was a little bit of confidence: I was able to tackle one of the all-time greats.”

Polamalu reminisced shortly after he and Bruce were announced as two of the five modern-era inductees for the 2020 Pro Football Hall of Fame class. Running back Edgerrin James, safety Steve Atwater and offensive lineman Steve Hutchinson also were part of the class.

All will be enshrined into the Hall of Fame this summer in Canton, Ohio.

Bruce, 47, was elated and relieved when David Baker, the President of the Hall of Fame, knocked on his hotel room door on Saturday to inform him his long wait was over.

“Like people have told me, and I didn’t want to hear it, when you get the knock, the frustration of that leaves immediately,” said Bruce, who played at Santa Monica City College, West L.A. College and Memphis.

Polamalu’s induction was regarded as a foregone conclusion.

He played his entire 12-year career with the Steelers, helping them win two Super Bowls. He was 2010 NFL defensive player and earned eight Pro Bowl selections. Polamalu, with his long black hair flowing, intercepted 32 passes and scored three touchdowns — he also had three playoff interceptions — before retiring after the 2014 season.

“To me it’s just really a testament of being part of great defenses,” Polamalu said, adding, “At times, people thought I was the lead singer. But I really was just one member of the choir in that group.

“If anything, it’s really a tribute to all the great defenses and all the great influences that I’ve had in my professional football career.”

In the days leading up to Saturday’s announcement, several former coaches and players said there was no question Polamalu was a first-ballot Hall of Famer.

“Day 1 you could just tell that he was guy who had great feel for the game — his instincts, his suddenness,” Cowher said. “Just the way he played the game at times, you didn’t want to channel him, you almost wanted to just let him play.

“We got to learn he had multiple skill-sets, and so he’s a guy that could a change a game in a heartbeat. A once-in-a-lifetime player.”

“He was just one of those players, he had that it factor,” Bettis said, “and whenever he was on the football field you had to know where he was because had the potential to make a game-changing play at any moment.”

Bruce’s 16-year career included his rookie season in Los Angeles, 13 seasons in St. Louis and two seasons with the San Francisco 49ers. The four-time Pro Bowl selection helped the Rams win the Super Bowl after the 1999 season and return to the game in 2001.

Bruce said he was honored to become a member of the Hall of Fame, and that he had fond memories of his rookie season in Los Angeles. The Rams moved to St. Louis the next season.

“Great memories and great moments,” he said, “and that last [draft] class before we went to St. Louis, we’re all still connected pretty good.”