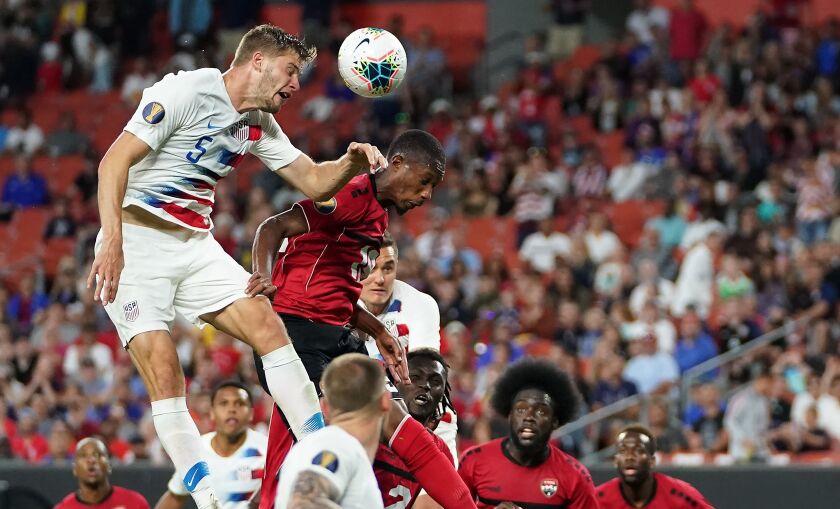 Galaxy’s Julian Araujo and LAFC’s Walker Zimmerman are among 25 called up for U.S.

Gregg Berhalter’s mission as coach of the men’s national soccer team is to get the United States to Qatar for the 2022 World Cup. Even though the tournament is more than two years away, Berhalter decided to take his players to Doha to get an early look around, moving the team’s traditional January training camp to the Persian Gulf kingdom.

Twenty-five players, including Galaxy defender Julian Araujo and former Galaxy academy player Ulysses Llanez, will begin gathering at the Aspire Academy in Doha this weekend for 20 days of training. Also called up were Galaxy midfielder Sebastian Lletget and LAFC center back Walker Zimmerman. The team will break camp Jan. 25 and return to the U.S. for a Feb. 1 friendly with Costa Rica at Dignity Health Sports Park.

Because the camp takes place outside a FIFA window, 22 of the players come off MLS rosters. Midfielder Christian Cappis, who is with Hobro of the Danish SuperLiga, is the only player from a European first-division team called up.

“At the start of an exciting year, this is a great opportunity to continue our process and build on the foundation established in the last 12 months,” said Berhalter, who is beginning his second year as U.S. coach. “At the same time, there are a number of players getting their first exposure to the senior national team.”

Among those are Araujo and Llanez, both 18-year-old dual nationals who have played for U.S. age-group national teams but have never been called to train with the senior team. Araujo, an outside back who signed with the Galaxy 10 months ago, appeared in 18 MLS games in 2019, starting 10 times. Llanez, who has been called in to train with both Mexican and U.S. age-group teams, made his professional debut with Galaxy II but left for Germany in 2018. He is currently playing for the Wolfsburg U-19 team, for whom he has scored 10 times in 11 games.

The U.S. was originally scheduled to play El Salvador in its February friendly, but the Central Americans, trying to protect their FIFA ranking ahead of this fall’s World Cup qualifying tournament, backed out; Costa Rica was signed to replace them.

The game will kick off a busy two weeks at Dignity Health Sports Park, which will play host to five soccer games and a football game in 16 days. In addition to the men’s national team game, the stadium will be used for the semifinals and final of the CONCACAF Women’s World Cup qualifying tournament Feb. 7-9, the Galaxy’s preseason opener on Feb. 15 and the Los Angeles Wildcats’ first home XFL game on Feb. 16.