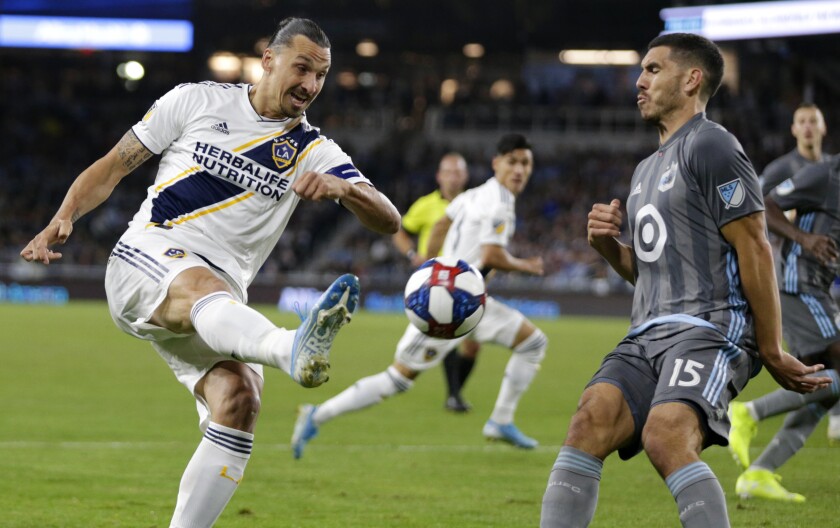 Galaxy beat Minnesota, will face LAFC next in MLS playoffs

It took Romain Alessandrini nearly six months to recover from a devastating knee injury. But once he got on the field he needed less than three minutes to save the Galaxy’s season, setting up Jonathan dos Santos’ game-winning goal Sunday in a 2-1 MLS playoff win over Minnesota United.

With the victory the Galaxy advanced to a Western Conference semifinal Thursday against LAFC, the crosstown rival to whom they’ve never lost. And Alessandrini wasted no time in stoking that rivalry.

“I’m pretty sure they are afraid of us,” he said of LAFC. “I think so because they never beat us. And it’s a good opportunity for us to show who owns L.A.”

Although the teams, which play just a dozen miles apart, have met only five times, the competition is already among the most heated in both Southern California and MLS. Within an hour of the Galaxy victory Sunday, general-admission tickets for Thursday’s game at Banc of California Stadium were starting at $213 on the secondary market.

But first the Galaxy had to get past Minnesota United. And that proved tougher than expected.

“This game was the most difficult we played this season,” Ibrahimovic said. “We played against a good team. They were good. They were confident. You could see that in their game.”

The Galaxy and Ibrahimovic, meanwhile, struggled, slowed by a physical Minnesota defense and a shoddy grass surface that was laid down just three weeks ago, then torn up during a Division III college football game played on Allianz Field on Saturday.

By halftime, there were visible divots in places.

“It’s not an easy field to play on,” said Ibrahimovic, the team’s leading scorer and MVP candidate who completed fewer than half of his passes in the first half. But coach Guillermo Barros Schelotto didn’t blame the Galaxy’s poor start on his striker.

Yet it fell to Ibrahimovic to set up the goal that broke open a scoreless tie in the 71st minute, bouncing a soft shot off defender Michael Boxall directly into the path of midfielder Sebastian Lletget, whose right-footed shot off the rebound found the back of the net.

“It was beautiful. Scoring a goal is the best,” Lletget said in Spanish. “Everything happened so fast. Ibra was there but didn’t hit it good. And I was there to put it in.”

Given the way Minnesota struggled to finish — the Loons took 16 shots but most of them went over or around the goal — the one goal looked as if it would be enough. But Alessandrini came off the bench a minute later to slip a pass to Dos Santos, who curled a right-footed shot just inside the far post to make it 2-0.

“It was a long process. And I went through a lot of things during these past six months,” Alessandrini said. “It wasn’t easy.

“I cannot explain the feeling I have right now. I love soccer, I love this club, I love Los Angeles and I just want to help the team right now.”

Dos Santos was in position to take the shot because Schelotto moved him forward in the team’s attack and used Perry Kitchen, making his first appearance in more than two months, as a box-to-box midfielder.

The goal would prove important when Jan Gregus put Minnesota back in the game by drilling a right-footed shot from the top of the box just inside the right post in the 87th minute. The Loons would take only one more shot the rest of the night, though, and afterward Gregus padded over to the Galaxy dressing room to exchange jerseys with Ibrahimovic, who was already looking forward to LAFC, which posted the best regular-season record in league history this year.

“This is only the beginning,” he shouted to his teammates after the team’s first playoff win in nearly three years. “We don’t stop for nobody. We continue like this. We destroy everybody.”