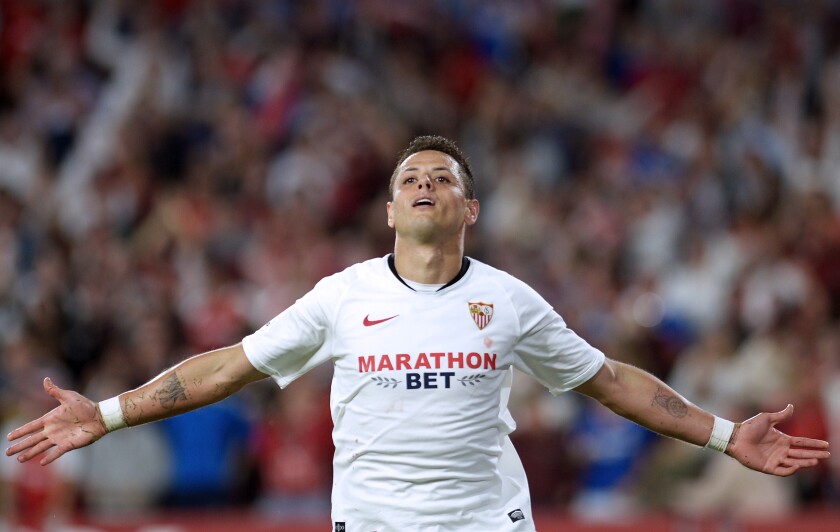 The Galaxy are closing in on a deal that would bring Javier “Chicharito” Hernandez, Mexico’s all-time leading scorer, to MLS on a franchise-record transfer.

Galaxy general manager Dennis te Kloese confirmed the team was in talks with Hernandez, 31, who moved from England’s West Ham United to Sevilla on an $8.7-million transfer last September. But the forward has fallen out of favor in Spain, appearing in just two league games since Nov. 2.

The Spanish newspaper Marca reported over the weekend that Sevilla has agreed to let Hernandez go on a $10-million transfer and that Hernandez’s representatives were scheduled to meet with the Galaxy this week to work out a new contract.

A Galaxy spokesman called that report optimistic and said nothing has been agreed. But he did confirm the two sides are in advanced negotiations.

Hernandez signed a three-year $9.7-million deal when he joined Sevilla four months ago.

“I think he could be good for us,” Te Kloese said. “We’ll give it a serious try.”

The Galaxy are working on a tight deadline since the team opens preseason training camp next weekend and Te Kloese said he wanted his full roster in uniform for the first practice.

It’s unlikely the Galaxy could land Hernandez for less than $10 million given what Sevilla paid for Hernandez last summer. Monchi, the director of football operations for the Spanish club, is a master at buying and selling players at a profit, a talent he has used to make Sevilla competitive in a league dominated by Real Madrid and Barcelona, the two richest clubs in soccer.

A $10-million transfer would mean a $1.3-million profit for a five-month investment in a player who isn’t starting regularly, a good return for Sevilla; anything less would probably be rejected. But $10 million would be a record fee for the Galaxy, topping the $7 million the team paid for Giovani dos Santos in 2015.

The Galaxy are looking for Hernandez to replace Zlatan Ibrahimovic both in the lineup and as the public face of the franchise. Ibrahimovic scored 30 goals and earned the team a ton of media attention last season before leaving for AC Milan. For much of the past decade Hernandez has been the most popular Mexican player in the U.S. and he has an especially strong following in Southern California.

“I want to be as open as I can to any opportunity and then when I need to decide something in the future, those decisions, I will think about them and try to get the best one,” Hernandez told the Times in November when asked about a move to the U.S. “MLS is a league that is improving.”