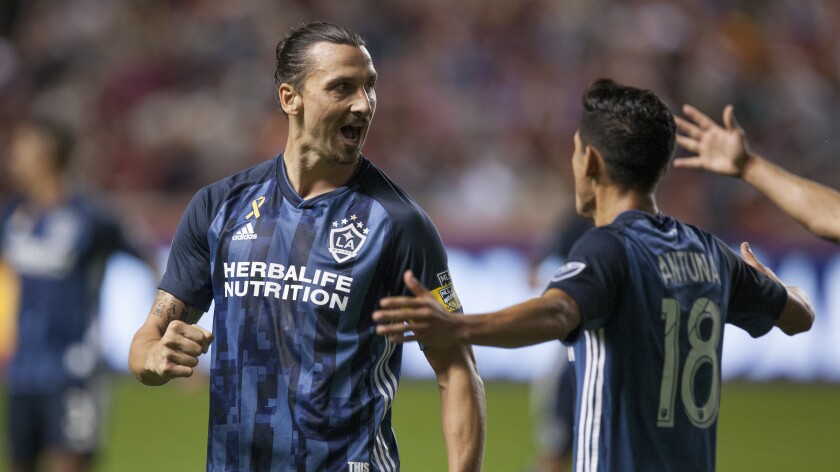 Galaxy striker Zlatan Ibrahimovic speaks in boasts so it’s sometimes easy to dismiss his brags. But when he claimed last month that he is “the best-ever player in MLS. And that’s without joking” he was probably telling the truth. Certainly no player in recent memory can dominate a game like the Galaxy captain, one of just three active players worldwide who has scored more than 500 times for club and country.

Thirty of those goals have come this season. That’s the third-highest in league history, and while it helped the Galaxy (16-15-3) to the playoffs for the first time since 2016 — they will open the postseason against Minnesota United FC on Sunday — it was second-best to LAFC star Carlos Vela in the single-season scoring race. However, Ibrahimovic, 38, took a back seat to no one when it came to scoring spectacular goals.

5. Ibrahimovic broke Carlos Ruiz’s 17-year-old franchise single-scoring record by scoring three times in a mid-September home rout of Sporting Kansas City. The record goal came early in the second half with Feltscher sending in a one-bounce cross to Ibrahimovic, who was flanked by two defenders. After struggling initially to control the pass with his right foot, he stepped back to get the ball on his left foot, then blasted it past keeper Tim Melia.

4. Remember how we said Ibrahimovic is at his best when it matters most? His encore to the July hat trick against the Galaxy’s cross-town rival was a brace in the opening 15 minutes of an August draw with LAFC at Banc of California Stadium. On the second, Ibrahimovic timed his run between two defenders perfectly, collected a long through ball from Favio Alvarez, then stepped around keeper Tyler Miller for the clinical finish.

3. On the second Galaxy goal of a 2-0 April win in Vancouver, Ibrahimovic stepped away defender Erik Godoy, used his chest again to settle a long cross from Rolf Feltscher on the right wing before volleying it in off the turf and into the net before Godoy had a chance to recover.

2. Ibrahimovic is frequently at this best in the biggest games, as he was in the first El Trafico of the season in July, scoring all three Galaxy goals in a 3-2 win over LAFC. His first was the best. In the eighth minute he ran onto a cheeky pass from Julian Araujo, again chested it onto his right foot, then lifted the ball onto two LAFC defenders. After letting the ball take a bounce, Ibrahimovic then sent a right-footed volley into the net from about 18 yards out before racing to the sideline to celebrate in front of the LAFC bench.

1. If Vela is at his best playing in concert with his teammates, Ibrahimovic is a solo performer. Just get him the ball and he’ll do the rest, as he did on this June goal in a home loss to the New England Revolution, first chesting the ball into a right-footed volley, then using a bicycle kick to send it to the back of the net.

Southern California has been blessed in recent years by having baseball’s two brightest stars, the Angels’ Mike Trout and the Dodgers’ Clayton Kershaw, playing for the local teams. In soccer, no single market has ever had a season like the one Vela and Ibrahimovic put together this year. And while the MLS Cup won’t come down to another Vela-Ibrahimovic duel — both teams play in the Western Conference, meaning only one can advance to the title game — the MVP race almost certainly will.