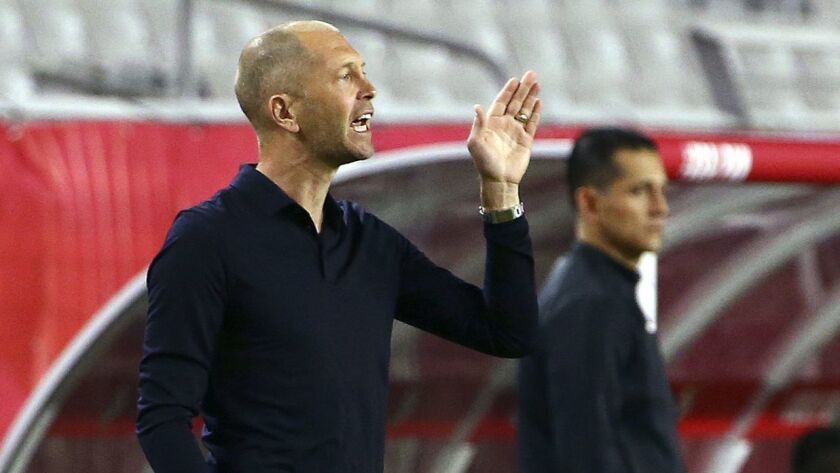 Gregg Berhalter’s job isn’t at stake if the U.S. loses to Canada in Nations League

When the U.S. meets Canada in a CONCACAF Nations League group-stage game Friday, it will be playing for pride, revenge and a place in the tournament semifinals.

What it won’t be playing for is coach Gregg Berhalter’s job. That’s secure no matter Friday’s result said Earnie Stewart, U.S. Soccer’s sporting director and the man who hired -- and can fire – the embattled Berhalter.

In a wide-ranging 40-minute interview in an otherwise deserted conference room at the sprawling golf and convention center outside Orlando, where the U.S. team has trained this week, Stewart said he’s happy with Berhalter’s performance in what has been arelatively uneven year for the national team.

“We’re looking at the future. So when I evaluate Gregg and the coaching staff, I’m a pleased man,” Stewart said. “An individual result is not going to change that.”

Yet any result short of a win Friday would be a blow to a team still trying to reset itself after failing to qualify for last year’s World Cup.

The team went more than a year without a permanent head coach before Berhalter was hired last December. And while there have been some positives since then, including wins over World Cup teams Panama and Costa Rica, a draw with fifth-ranked Uruguay and a berth in last summer’s Gold Cup final, there have also been troubling moments, such as back-to-back losses to Mexico, a lackluster performance against Jamaica and last month’s loss to Canada, the first by a U.S. team since 1985.

All that, good and bad, has happened as Berhalter struggled to implement a complicated short-passing, possession-based game his personnel seemed ill-suited for. Stewart, who favors the attractive style Berhalter is trying to teach, said he understands his coach needs time.

“It’s never about a single result. It’s about the progression of the team,” he repeated.

“For us as a staff, it’s what do we want to achieve. Once you’ve set that vision, you need to stick to it. Consistency and continuity will actually bring you to where you need to be.”

“I have no fear at all that we are not going to qualify,” Stewart said. “I’m very confident about that.”

The tactical part remains a work in progress, though, and the learning curve has been far steeper than anticipated, with the team showing flashes of understanding surrounded by long periods of tentative and uncertain play.

“Our players showed that they can perform at a really high level,” Stewart said. “The question for us is not so much can these players do that. [But] how can we progress to having our players maintain that for 90 minutes?”

More troubling in the last loss was a lack of grit and desire, traditional hallmarks of the national team and ones that Canada displayed but the U.S. didn’t.

“Little kicks after foul, little kicks after winning the ball already. That’s something that we realized and we’re really not satisfied about how we responded,” midfielder Weston McKennie said. “We can definitely show a little bit more pride. “

The U.S. (9-5-2 in 2019) needs to beat Canada (6-2-0) in Friday’s rematch, do the same to Cuba next week and make up a four-goal differential with Canada to win its group and advance to the Nations League final four.

This game may not be the best measure of the team’s progress though since the U.S. will be missing its best player in Christian Pulisic, its starting goalkeeper in Zack Steffen and its captain in Michael Bradley. All three played in last month’s loss in Toronto but were scratched this week with injuries.

“We’re embracing it,” Berhalter said of the challenge “because that’s our situation.”

The struggles on the men’s side aren’t limited to the senior national team, leaving U.S. Soccer battling a perception the whole program is in disarray. The U-17s went winless in group play in this month’s World Cup, the predictable result of a shakeup in the youth program that has seen seven head coaches leave and one replacement hired in the last two years. Raphael Wicky, the one hire, had just six months to get the U-17s ready for their world championship.

“Youth national team coaches are something that we need,” said Stewart, who is putting together an organizational chart for the entire national team program.

“That’s how I operate and work. It starts with that mission and vision you have and putting a structure together that I think will be very successful. Then it’s placing all these things in there. And then there are games, and results, and yeah, I would say the under-17s are disappointing, the results that we had.”