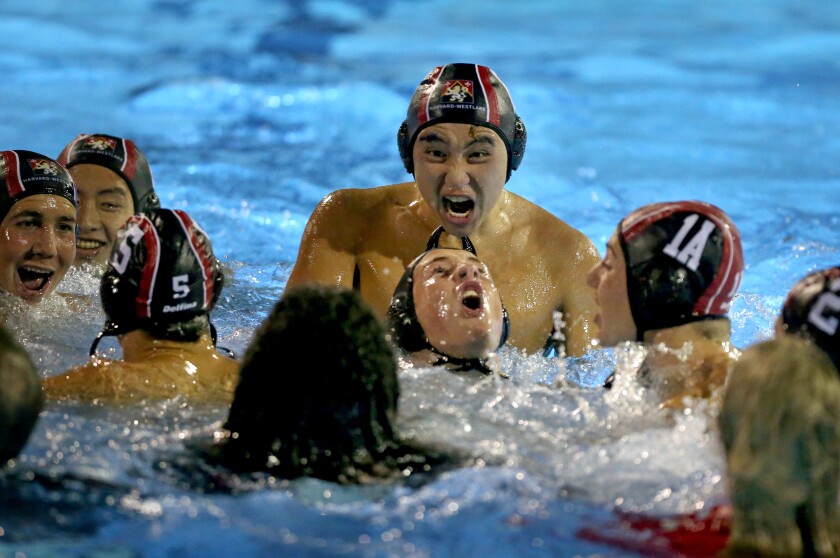 The Studio City Harvard-Westlake boys’ water polo team again came up with an inspired defensive effort in its biggest match of the year.

A championship-level defense lifted the Wolverines on Saturday night in the CIF Southern Section Division 1 title match against a Newport Harbor team with a ton of scoring threats.

Top-seeded Harvard-Westlake never trailed and beat the No. 2-seeded Sailors 6-4 at Woollett Aquatics Center, winning for the second straight year in a rematch of last year’s final.

Six players scored for Harvard-Westlake (28-2), as Nico Tierney, George Avakian, George Caras, Mot Stothart, Ethan Shipman and Shay Gillearn netted one goal each. But it was the defense anchored by Stanford-bound senior goalkeeper Nolan Krutonog, who made 14 saves, that was the story.

In beating Newport Harbor (26-4) for the third time in four tries this year, Harvard-Westlake also held the Sailors to a season-low goal total in the CIF final for the second straight year.

Harvard-Westlake held Newport Harbor scoreless for the first 11-plus minutes of Saturday’s match and also held the Sailors’ talented center combination of senior Ike Love and junior Eli Liechty to no goals.

“That’s insane,” Harvard-Westlake coach Brian Flacks said. “My kids are remarkable, that’s the only way to say it. These kids work hard, so hard all year round. I think we take a ton of pride in our preparation. We get a chance to play these guys all year, and we did a phenomenal job executing tonight on both ends. I thought similar to last year, there were a lot of opportunities for both teams that we could have scored. Krutonog and [Newport Harbor goalkeeper] Blake Jackson were both incredible.”