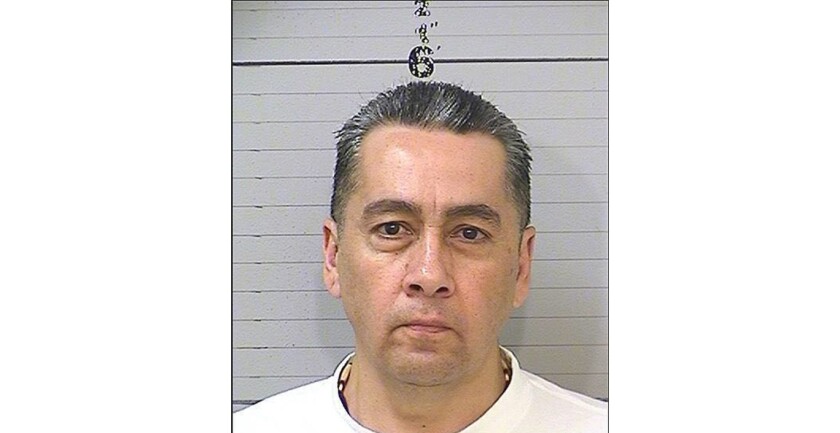 He murdered his stepmother in 1986. Now he’s a suspect in L.A. doctor’s slaying, police say

A man charged Friday with stabbing and strangling a retired gynecologist at her East Los Angeles home was convicted of killing his stepmother in 1986, records show.

A team of Los Angeles Police Department officers and FBI agents arrested Timothy Chavira on Wednesday at a Pasadena residence, according to an LAPD statement.

Chavira, 56, was booked on suspicion of killing Editha de Leon on Dec. 7 at her home in the 3900 block of North Van Horne Avenue in El Sereno, police said. One of de Leon’s sons told KCBS-TV that relatives discovered her body the next day, when they came to pick her up for a Sunday birthday lunch.

De Leon, who immigrated to the U.S. from the Philippines and had five sons, died from “sharp force injuries and strangulation,” according to the Los Angeles County medical examiner-coroner.

It’s unclear how police identified Chavira as the suspect. He remains in custody on $2-million bond, and an attorney for Chavira could not be reached for comment.

Chavira was granted parole and released from state prison on July 28, 2017, according to a spokesman for the state Department of Corrections and Rehabilitation.

A Los Angeles County jury had convicted him of first-degree murder for the 1986 slaying of his stepmother.

During the trial, prosecutors said Chavira beat his stepmother, Laurie Ann Chavira, with a chair or table leg, and stabbed in her in the chest before stuffing the body into the trunk of her car. It took investigators 11 days to find Laurie Ann Chavira’s decomposing body in the summer heat, leaving investigators to identify her through dental records.

“The only motive I could come up with was hatred,” then-Deputy Dist. Atty. David E. Demerjian told The Times in 1987 about the grisly slaying.

Chavira fled the day after the murder. Using motel receipts, investigators ultimately caught up with him in Portland, Ore. At the time, Chavira had recently gotten off parole for a robbery committed in Oregon, prosecutors said.

For killing his stepmother, a judge sentenced Chavira to 26 years to life in state prison. An appellate court panel affirmed the conviction in 1991.

De Leon was raised about 30 miles north of Manila in the Philippines and had 11 siblings. She and her husband came to the U.S. in 1970, according to her obituary, and completed her medical residency at Case Western Reserve University.

After retiring from a career as an obstetrics-gynecologist, she traveled around the world and spent time with her five grandchildren.

“Editha was a devoted Catholic,” the obituary said, “and especially enjoyed the Christmas season as it reminded her of her favorite childhood memories in the Philippines and gave her the opportunity to celebrate with her sons and their families.”

Her funeral is scheduled for next month.