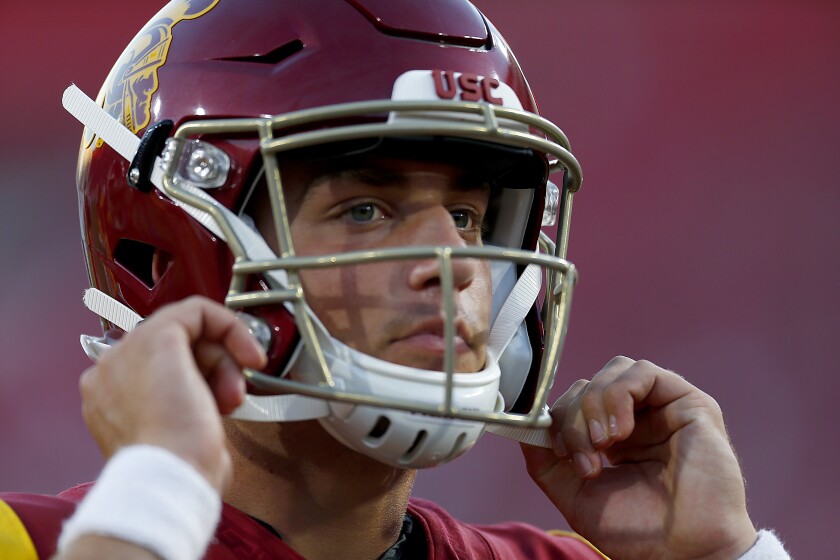 Holiday Bowl | USC vs. Iowa: A look at how the teams match up

USC quarterback Kedon Slovis vs. Iowa secondary. There isn’t a quarterback in college football who ended the regular season on a higher note than Slovis, as the freshman threw for 400 yards and four touchdowns in four of his final five games. But those four games came against pass defenses that rank outside of the top 100 nationally. Iowa ranks 11th in passing yards allowed per game (184.2) and has allowed just two quarterbacks to surpass 200 yards.

USC (462.2 ypg, 33.2 ppg): Behind its powerful passing attack, USC has put up a ton of points down the stretch, even as its run game failed to prove the balance that coordinator Graham Harrell had hoped for this season. The Trojans have scored eight more points per game in the second half of the season, despite averaging only three yards per carry during that stretch. That’s how much they’ve relied on Slovis to find his rhythm. Whether that heavy emphasis on the air will continue to fly against a top pass defense remains to be seen. But working in the Trojans’ favor is the fact that Iowa hasn’t seen a scheme quite like USC’s all season.

Iowa (369.8 ypg, 23.8 ppg): No one would dare characterize Iowa’s offense as explosive or exciting. At 5.54 yards per play, the Hawkeyes would rather limit mistakes and hold onto the ball as long as possible. Behind a three-year starter at quarterback in Nate Stanley and the stout offensive line, that strategy has actually worked quite often. The Hawkeyes haven’t trailed all that often this season and they have not lost by more than a single score. But if USC’s much more explosive offense is able to put up points early, Iowa is going to have a hard time catching up with an approach based mostly on ball control.

USC (415.2 ypg, 27.8 ppg): After an inconsistent season marred by injuries, USC’s defense is finally at full strength. But in a game that could be coordinator Clancy Pendergast’s last, it remains to be seen if a suddenly healthy group helps iron out some of the issues that plagued USC all season. The Trojans’ bend-but-don’t-break approach allowed more than 500 yards to UCLA in their last game and while the Hawkeyes haven’t sniffed the 400-yard mark since September, they’re capable of prolonging drives and tiring out USC’s defense.

Iowa (304.3 ypg, 13.2 ppg): The best way to slow down a dynamic quarterback is to pressure him on every play, and Iowa has the personnel up front to make that happen. With 24 sacks over three seasons, defensive end A.J. Epenesa is among the most feared pass rushers in the nation and a likely top-10 pick in the upcoming NFL draft. USC has done well keeping sack artists in check, but the Trojans haven’t faced a defensive front this physical all season. Iowa’s Michael Ojemudia is also one of the best — and most physical — defensive backs the Big Ten has to offer, and at 6 feet 1, he’ll likely be tasked with keeping top target Michael Pittman Jr. in check.

With the future of special teams coordinator John Baxter in question heading into the bowl game, USC kickoff units have plenty to prove. Baxter’s kickoff coverage units ranks 129th of 130 teams in yards allowed per return this season (28.24), while Iowa ranks in the nation’s top 10 in the same category, allowing 11 fewer yards per return than USC.

USC has largely dominated the Big Ten in recent years, with wins in 13 of its last 15 Big Ten matchups. Iowa and USC have only met on a football field once over the last 46 years. That 2003 Orange Bowl meeting wound up a rout for USC, as the Trojans beat the Hawkeyes by three touchdowns. USC went 12-1 the following season, on their way to a win in the Rose Bowl.

Despite his best efforts to return following October ankle surgery, USC running back Markese Stepp is out for the game. … Starting right tackle Drew Richmond, who suffered a foot sprain during bowl practice is “50-50 at best,” Trojans coach Clay Helton said. Richmond said on Tuesday that he planned to play.