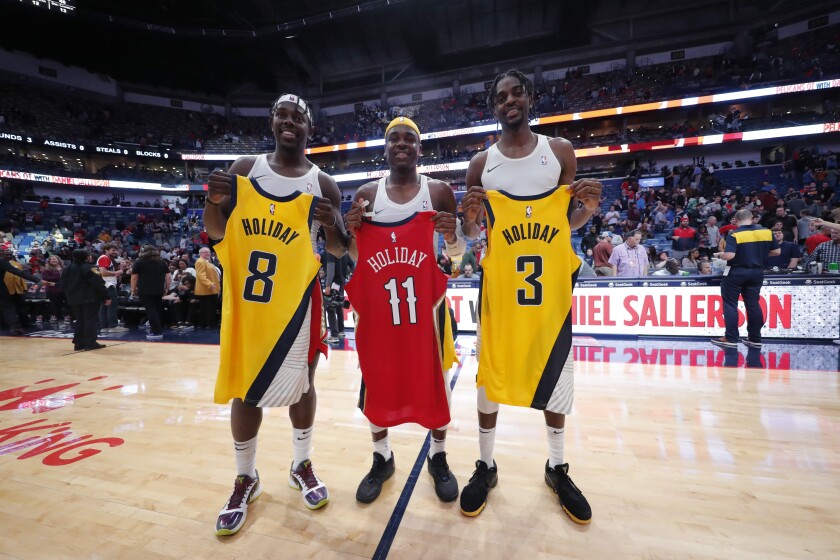 It was a special moment Saturday night in New Orleans when the Pelicans hosted the Indiana Pacers and all three Holiday brothers — Jrue, Justin and Aaron — not only played in the game, but were on the court together during one point in the second half.

The game was the first time in NBA history that a trio of brothers appeared together in a game and later played at the same time.

Jrue is a veteran starer for New Orleans while Aaron recently became a starting guard for Indiana. Justin is a reserve wing for the Pacers. Each brother saw action in the first half and then all three were on the court when Justin entered the game with 4 minutes 54 seconds left in the third quarter.

Family time for the Holidays!First instance in @NBAHistory that three brothers have played in the same game. pic.twitter.com/hsNnHnpeb0

The Holidays brothers are from the Los Angeles area, having played at North Hollywood Campbell Hall High. Jrue and Aaron played at UCLA while Justin went to Washington.

There have been many sets of brothers to play in the NBA, including against each other and at other times alongside one another.

It has been pretty rare for three or more brothers to make it to the league, though.

The Jones brothers (4) and Russell brothers (3) were the first sets of three or more to make it to the NBA, beginning in the 1970s. Then the Barry brothers played in the 1990s and overlapped for a brief period.

Tonight marks the first time three brothers play on the same floor in the NBA and it's safe to say the Holiday's are excited:Jrue: "This is super cool."Aaron: "I'm just happy to be out here with them. Hopefully, we can continue this."Justin: "We support all the way down." pic.twitter.com/5720YTFab1