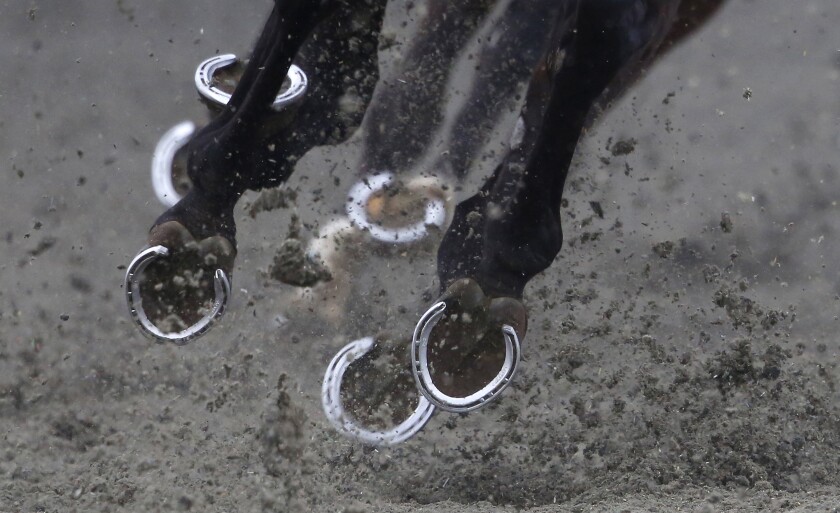 Horse Racing newsletter: What’s next up for the CHRB?

Hello, my name is John Cherwa, and welcome back to our horse racing newsletter s racing takes a break until Friday’s card at Santa Anita.

The California Horse Racing Board will have its first meeting on Wednesday in its new winter-spring home of Sacramento. Prior to now, the meetings this time of year were being held at Santa Anita, but the track said it no longer wanted to serve as host.

As is always the case, the really interesting items are hidden with the shortest language. For example, take this one:

“9. Discussion and action by the Board regarding the proposed amendments to CHRB Rule 1843.5, Equipment Requirement, to modify riding crop specifications and require racetracks to supply and control riding crops.”

The riding crop, better known as the whip, has been one of the bigger areas of contention as horse racing has tried to reform itself. There have been a lot of proposals and we’ll get to the latest in a minute.

The actual size and scope of the crop will be the subject of item 9. It was set up by this declaration by Dr. Greg Ferraro, the CHRB chair, at the last meeting.

“The Board intends to make certain specifications about what type of riding crop can be used. Unfortunately, that has to be taken up as a separate item. It can’t be considered in this agenda item. And since it’s not on the agenda, we can’t really discuss it until the next meeting.”

So, here we are, the next meeting. And therein lies one of the biggest obstacles of the CHRB. It is duty, and legally, bound to make all its rules, regulations and goings on open to public review, which is a very slow process. It makes the DMV look like a rabbit. Much as we all hate it, it’s in our best interest and I wouldn’t have it any other way.

But, nonetheless on Wednesday the CHRB will look at the Ramon Dominguez riding crop that is supposed to be the most “equine friendly” of anything on the market. It should have been looked at a while ago. One of the interesting provisos is that the crops would have to be checked in and out like library books. This would be done to make sure there is no funny business with the crops.

As for the actual whip rule, let me quote from Rick Baedeker, executive director of the CHRB at the December meeting.

This was followed by a lengthy discussion of the penalty if the rule were broken.

So, where does it stand? It’s in the hands of a 45-day public comment period and, perhaps, could come back with more revision—which is smart—and then go back for 45 more days of comment. And again, and again.

So, it could be decided by the time I want to hang this up at 67. (I just had my 40th birthday in December and if you believe that my Pinocchio nose would have gone coast-to-coast. Actually, my birthday is in December. That’s true.)

There is a reasonable solution which would be to try things on a provisional basis. In other words, let’s try it and see how it works. The CHRB legal staff, the same one that didn’t find a conflict of interest when former CHRB vice-chairman Madeline Auerbach and Stronach big-shot Tim Ritvo had a business arrangement over the ownership of a horse, was asked about that possibility. They didn’t know. Let’s hope they know when asked this time.

Because the newsletter won’t be back until Friday, I wanted to get this out of the way. For what happened on Wednesday, check back with the print edition of the Los Angeles Times or latimes.com/sports.

I know I normally use the “Who goofed” intro when a mistake is made, but it doesn’t feel right to use it on such a serious topic. In the item about Tikku Olam being the fifth fatality at Santa Anita while training on Sunday, I had incorrect information. It was on the training track, not the main dirt surface. The main dirt track has not had a fatality this meeting.

Monday’s holiday feature was the Grade 3 $100,000 Megahertz Stakes for fillies and mares going a mile on the turf. Carressa’s win was a credit to Victor Espinoza, who took a difficult horse into the first turn, steadied her and made the right move at the right to win by a three-quarters of a length.

Carressa ran in the middle for most of the race before making her move on the far turn and taking a one-length at the top of the stretch. She paid $10.20, $5.00 and $4.00. Super Patriot was second followed by La Sardane, Streak of Luck, Take These Chains, Keeper ofthe Stars and Brill, a $1 million purchase.

John Shirreffs (winning trainer): “I’m really thrilled with her, the way she’s progressed and the way she ran today. I thought the most important thing was when Victor was able to control her there going into the first turn. After that, she settled and really ran well.”

Victor Espinoza (winning jockey): “We didn’t know if she’d handle the turf, so I had two plans. If she broke sharp, I’d go to the lead, but she kind of missed the break, so we sat behind. I wanted to keep her covered up going into the first turn because she was pulling pretty hard. When we turned up the backstretch, I moved her out and dropped my hands and she relaxed. At that point I knew she was handling the turf and I really wasn’t worried about anyone else.”

“We took a shot at the turf. There was really no other place for her to race in, instead of just training her we might as well run her and John [Shirreffs] did the right thing. Now she can run in the dirt or the turf so they have many races to run, she’s been impressive and she is on her game. When a horse is getting good and starts winning it’s hard to get beat, they don’t come very often like Carressa that can run on both surfaces.”

Now, the star of the show, Monday’s results.

GIDGETTA had speed outside the runner-up then stalked off the rail, bid between horses under left handed urging a sixteenth out, gained the advantage in deep stretch and inched away at the wire. MERNEITH a half step slow into stride, sped to the early lead, edged away and set the pace a bit off the rail then inside, fought back in deep stretch but could not quite match the winner late. REEM close up stalking the pace outside then three deep to the stretch, bid three wide a sixteenth out and was outfinished late. PRINCESS MO stalked between horses then outside a rival on the turn and in the stretch and did not rally. DRAMA FOR MAMA sent along early, saved ground stalking the pace to the stretch, continued inside and weakened.

SLEWBURY PARK had speed three deep to press the early pace then stalked outside a rival, re-bid three wide on the turn and into the stretch, took a short lead in midstretch, fought back under urging a sixteenth out and gamely prevailed. ON THE VERGE chased off the rail then three deep leaving the turn and into the stretch, bid three wide past midstretch and continued willingly but could not get by the winner. AWESOME ALESSANDRA had speed between horses then stalked just off the rail, re-bid between foes on the turn, put a head in front, fought back just off the fence in the stretch and was outfinished late. POLAR ROUTE stalked inside, split rivals leaving the turn, angled back to the inside in the stretch and lacked the needed late kick. EXCESS COIL broke a bit slowly, settled off the rail, came a bit wide into the stretch and lacked a further response. OUI SAY NO dueled inside then inched away on the backstretch, battled inside on the turn, fell back a quarter mile out and had little left for the drive.