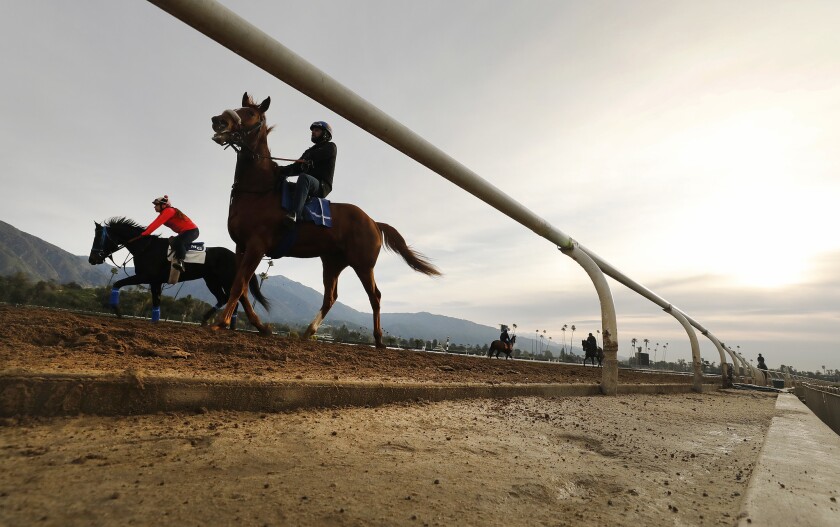 Hello, my name is John Cherwa, and welcome back to our horse racing newsletter as as we have a stewards’ ruling case that gets resolved after almost two decades.

The Santa Anita stewards were on the ball again this week and filed their minutes in a timely manner. So, let’s get right to them.

--Jockey Joel Rosario was suspended for three days (Feb. 6, 7, 8) for careless riding when his mount, Ghoul, was disqualified in the seventh race on Jan. 26 for crossing over without enough clearance and impeding a horse on his inside. Ghoul was moved from second to fifth place. (Note: Racing at Santa Anita was canceled on Feb. 6 but it counts as a suspension day because he was also barred from riding at other tracks such as Golden Gate, which did run. The fact his home track was scheduled to run, but didn’t, doesn’t figure in to it.)

--Groom Saul Garcia is suspended for failing to appear at a hearing to answer charges of disorderly conduct. Garcia was alleged to have been intoxicated and acting aggressively to three different licensees at San Luis Rey Downs on or about Nov. 18 of last year.

--Trainer Phil D’Amato was fined $500 for having a prohibited substance in his horse, Our Romance, who finished third in he fifth race at Del Mar on July 26 of last year. Betamethasone, a corticosteroid, was the drug that was present in the horse Neither D’Amato nor veterinarian Ryan Carpenter how the overage of th medication got in the horse.

--Jockey Agapito Delgadillo was suspended three days (Feb. 8, 9, 14) for careless riding aboard R Matineigh Idol in the first race on Jan. 31. It resulted in R Matineigh Idol to be disqualified from second to third. Delgadillo admitted he crossed over but it wasn’t “that bad.”

--Jockey Hector Berrios was fined $500 for using the riding crop more than three times in a row on his mount, Brown Storm, in the San Marcos Stakes on Feb. 1. The stewards’ minutes said he violated the crop rule three times in the stretch. Brown Storm finished fourth in the six-horse race. Steward Kim Sawyer voted for a two-day suspension.

--Trainer Don Chatlos was fined $400 for late registration of Clivetty as using Lasix in the second race on Feb. 1. The horse was allowed to run and won the maiden special race for 3-year-old fillies.

--Owner John Kofoed was restored to good standing from a suspension that was issued on Aug. 27, 2003. There were two complaints. In 2003, owner Earle Malley filed a complaint against Kofoed for failure to pay $1,724 for training services related to an ownership/partnership agreement over two different horses. According to a CHRB investigator, no one signed for the certified copy of the complaint mailed to Malley. Malley did not appear for the hearing because it was believed that Malley died around 2014. The case was dismissed.

There was a second complaint in 2003 that alleged that Kofoed owned veterinarian John Araujo $94.50 for services rendered in 2002. Kofoed wrote a check and the case was dismissed. So, after almost two decades, Kofoed was restored to good standing. And, if you are as confused as I am, join the club.

OK, here’s one I’m not taking a bullet for. Some of you (who are obviously not reading this because you can’t) have not gotten the newsletter the last couple of days. I’m heartened that so many of you find this newsletter a part of your morning routine. Some of you were even receiving this newsletter well after racing has finished for the day. Neither is acceptable. We want to return this newsletter to its normal schedule and we’ll get there. The good news is I’ve got Houston Mitchell, my editor and our own Ray Donovan, on the case with our tech people. (Can you believe Showtime canceled Ray Donovan?)

There was one graded stakes on Sunday, and it was a good one. So, let’s review it.

Grade 2 $200,000 San Vicente Stakes: What makes this race unusual is it’s only seven furlongs and carries with it no Kentucky Derby points. But, given that all the emphasis is on the last two prep races, you can get away with no points in perhaps your first prep of the year. Oh, yes, it’s restricted to 3-year olds.

Nadal was the favorite and didn’t disappoint. He broke sharply, ran near the front, went to the front on the far turn, was challenged by Ginobili and then pulled out an effortless win by three-quarters of a length. Nadal paid $2.60, $2.20 and $2.10. Ginobili was second followed by Fast Enough, Storm the Court, Ra’ad and Party Town.

Bob Baffert (winning trainer): “[Sunday], I told [jockey] Joel [Rosario], don’t get cute, just go. We can rate him some other day. They took it to him, but if we’re gonna get beat, get beat. I trained him light for this, so this is my serious work. … I thought he was gonna get beat. He got to gut it out [Sunday], so he’s got a good foundation now. This should set him up pretty good and I think we’ll go to the Rebel [at Oaklawn Park March 14].”

Joel Rosario (winning jockey): “He broke sharp and he handled the pressure from the outside. I was never worried about it. My horse was moving very well and I was confident because I could feel I had a lot of horse under me. He was very impressive. He ran very fast today and he runs like he’ll like two turns, but you never know until they do it.”

If you want to read more, there this story I did for the L.A. Times web and print. Just click here.

A look at graded stakes or races worth $100,000 late Saturday night and on Sunday.

Now, the star of the show, Sunday’s results. See you Friday.

SWIRLING had speed between horses then stalked a bit off the rail, came out in upper stretch, rallied under left handed urging five wide in deep stretch and got up nearing the wire. SEASIDE DANCER dueled three deep between horses then stalked leaving the backstretch, angled to the inside on the turn, awaited room behind rivals leaving the turn and into the stretch, came out for room nearing midstretch, rallied four wide between foes to a short lead in deep stretch and was edged late. DONUT GIRL bobbled as the ground broke out behind at the start, settled outside a rival then chased a bit off the rail, came out in upper stretch and finished well. DRIFT AWAY broke a bit slowly, angled in and saved ground off the pace, came out a bit in upper stretch then was in tight off heels past the eighth pole, came out for room and was outfinished for the show. SQUARE PEGGY prompted the pace four wide then stalked outside the runner-up into and on the turn, re-bid three deep into and through the stretch, put a head in front in midstretch and was outkicked late. I LOVE ROMANCE had good early speed and dueled inside, fought back in the stretch and also was outkicked late. FRACAS dueled between horses then outside a rival on the turn, fought back between horses into and in the stretch and also was outfinished.

DESERT OASIS (GB) forced out into the first turn, stalked three deep to the stretch, bid outside the pacesetter to gain a short lead under urging, drifted in some aand gamely prevailed. ARCTIC ROLL (GB) saved ground stalking the pace, came out for room past midstretch and split horses late for the place. KITTY BOOM BOOM had speed outside foes then inched away and angled in, set the pace inside, fought back a bit off the rail in upper stretch, drifted in and battled along the fence in the final furlong. KYNANCE (IRE) pulled along the inside then came out into the first turn, stalked between horses then outside a rival on the second turn, angled out in the stretch and was edged for the show. SAPPHIRE KID forced four wide into the first turn, stalked three deep or outside a rival, came out in the stretch and could not quite summon the needed late kick. KOOKIE GAL angled in and saved ground off the pace, continued inside into and in the stretch and also could not quite offer the necessary response. PINK SCATILLAC stalked outside a rival then between horses on the second turn and into the stretch and weakened in the final furlong.