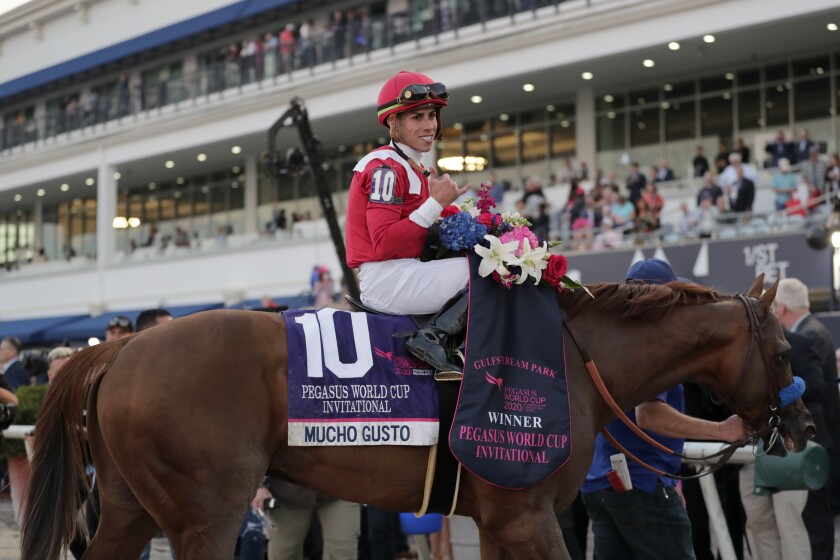 Horse racing newsletter: More thoughts on the future of the Pegasus

Hello, my name is John Cherwa, and welcome back to our horse racing newsletter as we mourn the loss of those involved in the helicopter crash in Calabasas. Kobe RIP.

I know this is the day where I give you the stewards’ rulings based on the stewards’ minutes, but guess what? Yup, there are no minutes made public since last Monday’s newsletter. I don’t know if the stewards were too exhausted from the three-day weeks or if the California Horse Racing Board folks were too busy not leaving Sacramento to go to a meeting. Or, maybe the Monday holiday threw everything off.

Saturday was the third Pegasus I’ve been to and was probably the best, despite the main event losing the main attraction of Omaha Beach. There was a good crowd but it wasn’t the most crowded I’ve seen Gulfstream Park since it became a racino. That still belongs to the showdown between Nyquist and Mohaymen in 2016, billed as the battle of unbeatens from the East and West.

Nyquist was so dominant that day that the biggest question of the day remained who in the entourage got to fly back to California on owner Paul Reddam’s private jet and who had to fly commercial.

The media room on big days at Gulfstream is what is normally the trainers and owners lounge. It’s convenient to the paddock and track and located at the back of the horse racing simulcast center called Silks. Wandering into Silks several times, you saw the enthusiasm that takes you back to when simulcasting first started. Almost all of the seats were taken and you felt a real energy.

Now, I’m sure it’s different on a Thursday in February, but for this one day it’s a fun place to be.

But, the question remains, can the Pegasus remain in its current state?

Let’s do a little history. The Santa Anita Handicap, affectionately known as the Big ‘Cap, was once one of the best and biggest races in the country bringing in all the top horses. Do the names Seabiscuit, Affirmed, Spectacular Bid and John Henry ring a bell?

On Feb. 29 will be the inaugural running of the $20 million Saudi Cup. Saturday’s running of the Pegasus was worth $3 million. Which would you rather run for?

The Pegasus World Cup started as a $12 million race, with the money put up by the participants, and grew to $16 million at one point. Saturday’s $3 million was all put up by The Stronach Group.

Maximum Security, 3-year-old male Eclipse winner, was scheduled to come to the Pegasus when the purse was thought to be around $9 million. But, when it was announced the race would be worth $3 million and medication free, owners Gary and Mary West bolted for the desert.

“I spoke to Mr. West right after we announced Pegasus,” said Belinda Stronach, chairman of TSG . “I owed him an apology that we came out very late with our announcement that we would be medication free and [the reduction in purse].

“For him [the medication] wasn’t a deterrent and he commended us for the $3 million purse and the $1 million [turf] purse. He thought those were phenomenal. There aren’t really that many good lucrative races in North America.

“But he said we came out too late. We were refining the process [for the race]. … But for him it was about the purse money. That’s his choice.”

A similar choice by other owners and trainers could spell trouble for this event.

Trainer Bob Baffert, in part, entered eventual winner Mucho Gusto in the Pegasus World Cup with the hopes that a win could lead to an invitation to the Saudi Cup. The expectation is that it will.

Think about it, could the Pegasus turn into a $3 million prep race?

Horse racing never seems to have a shortage of things to fix.

We were remiss in the Sunday newsletter to not mention the win by Texas Wedge in the $150,000 World of Trouble Turf Sprint, for horses going five furlongs on the turf. Texas Wedge is trained by Peter Miller and was ridden by Flavien Prat.

“Great ride, great trip. Flavien’s a great jockey,” Miller told Gulfstream’s press team. “This horse, giving six pounds to the runner-up and he’s not a big horse, it did its job and evened the race out. I’m just really proud of the horse. He ran a big race.“He’s a great little gelding. We bought him for $30,000 at OBS (Ocala Breeders Sale) and I just couldn’t be prouder of the horse and my whole team. It was a great job by everyone.”

Sunday’s feature was the $70,000 Clocker’s Corner Stakes for older horses going 5 ½ furlongs on the turf. Lilo Milo came three wide into the stretch blowing by leader What’sontheagenda and winning by 1 ¼ lengths. The interesting stuff was for second where Ghoul finished second but was disqualified to fifth for intereference.

Alfredo Marquez (winning trainer): “This horse has been so unlucky in some of his races. [Jockey] Ruben [Fuentes] was patient and he rode him great. I like the way he settled [Sunday] and that’s a big credit to Ruben. He got him to relax and then finish, so it went perfect.

“I have never given up on this horse, when he was a baby before he was racing, I told Jack [Weinstein] this is going to be something different. Something special. I knew it watching him breeze a bit at San Luis Rey Downs, I told the rider to stop on him and they did. They gave him the time and now it paid off.”

Ruben Fuentes (winning jockey): “We had a perfect trip. I was behind those two speed horses (What’sontheagenda and Bay Muzik) and I thought the seven (Bay Muzik) would stop, so I waited until we turned for home and then we angled out. When I asked him, he took off and he was gone. It’s great to ride for Alfredo. He’s a great guy and he’s a great trainer.”

Now, here’s the star of the show, Sunday’s results. See you on Thursday.

LIL MILO stalked between horses then off the rail on the turn, came three wide into the stretch, bid three deep under left handed urging in midstretch, gained the advantage in late stretch and inched away. GHOUL (BRZ) chased a bit off the rail, came out some in midstretch, moved up three deep then drifted in under right handed urging and bumped a rival a sixteenth out but finished well. WHAT'SONTHEAGENDA angled in and pulled inside and was in a bit tight a half mile out, bid outside a rival on the turn, took the lead into the stretch, fought back between horses in midstretch then a bit off the rail in deep stretch and was outfinished. AX MAN stalked a bit off the rail then inside on the turn, came a bit off the fence in the drive, was bumped when between foes a sixteenth out and could not quite summon the needed late kick. DOUBLE TOUCH (GB) broke a bit slowly, stalked three deep then outside a rival leaving the turn, came out into the stretch, was bumped and steadied between horses a sixteenth out and was outkicked late. OISEAU DE GUERRE also away a bit slowly, settled off the pace inside, came out leaving the turn and three deep into the stretch and lacked the necessary late response. BAY MUZIK had speed outside a rival then inched away and angled in, set the pace inside, dueled along the rail on the turn and into the stretch, fought back in midstretch and weakened late. Following a stewards' inquiry, GHOUL was disqualified and placed fifth for interference in deep stretch.