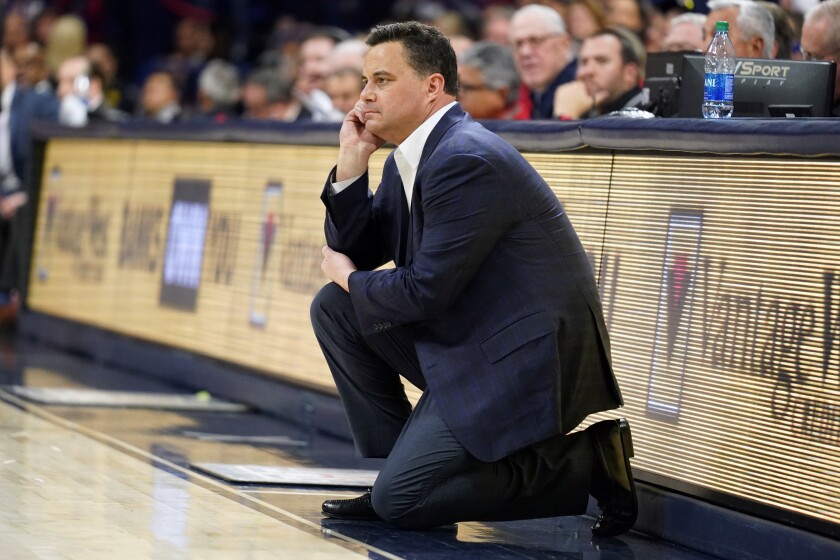 Hostility between UCLA’s Mick Cronin and Arizona’s Sean Miller? That’s in the past

The time before that, there was a chaotic sequence in which all 10 players chased a loose ball, forcing referees to untangle the pile of bodies on the court and assess two technical fouls for jawing and shoving.

Their teams were separated by only 3½ miles then, Cronin’s Cincinnati Bearcats facing Miller’s Xavier Musketeers in a yearly bloodbath known as the Skyline Chili Crosstown Shootout.

All sorts of battle lines were drawn. It was public versus private. Big school versus little school. Good, depending on one’s allegiance, versus evil.

Now their teams are roughly 485 miles apart, requiring a flight instead of a short bus ride, but the animosity remains. UCLA and Arizona have been each other’s chief rival in the Pac-12 Conference since coach Lute Olson arrived in 1983 and resurrected the Wildcats from their desert doldrums.

Cronin is just embarking on his own revival, trying to stir the Bruins from a hibernation spanning more than a decade. Standing in his way Saturday evening inside the McKale Center will be a familiar foe in Miller, whose No. 23 Wildcats (16-6 overall, 6-3 Pac-12) are part of a conference ruling class that no longer includes UCLA (12-11, 5-5).

Cronin pooh-poohed the idea of any lingering hostility between himself and Miller, saying the coaches talked this summer about their teams facing one another once more.

“People don’t realize how long we’ve known each other — a long time, way before we coached against each other, so that’s all over with,” Cronin said late Thursday night. “They’ve got a really good team and he does an excellent job, so we’ll be up against it.”

About 100 miles down Interstate 10, Miller praised Cronin, calling the job Cronin did while turning Cincinnati into an NCAA tournament fixture “remarkable” and similarly lauding his early efforts at UCLA.

“I do believe they’re the most improved team in our conference, if you look at maybe where they were a month ago, and where they are today,” Miller told reporters Thursday night while the Bruins were playing Arizona State during an eventual 84-66 defeat. “They’re really moving in the right direction. … I have great respect for Mick Cronin.”

That may not always have been the case. Miller appeared to take a thinly veiled shot at Cronin during his first year at Arizona while discussing the Wildcats’ youth.

Youth has been a theme once more for Cronin during his first season at UCLA. The Bruins have fought themselves at times as much as their opponents, often reverting to bad tendencies that have been difficult to shake.

Cronin was in a similar rebuilding mode when he logged his one victory over Miller in their three meetings in the Cincinnati-Xavier rivalry. He was in his first year with the Bearcats when they pulled out a 67-57 victory on their home court.

The challenge will be much greater Saturday, with the Bruins facing a nationally ranked team in one of the country’s most intimidating environments. Arizona features three potential first-round NBA draft picks in freshmen Nico Mannion, Josh Green and Zeke Nnaji along with steadying seniors Dylan Smith and Chase Jeter.

Cronin noted that the only thing that ultimately matters in this rivalry renewed is the players, not the coaches.

“It’s all players,” Cronin said. “We’re not playing against each other.”

Update: UCLA redshirt sophomore forward Jalen Hill could miss a second consecutive game after spraining his right knee in practice Wednesday. Against Arizona State on Thursday, Hill was relegated to standing and watching warmups in sweatpants and a blue hooded pullover, slapping hands with his teammates as they came to greet him. Cody Riley started and tallied 16 points and three rebounds in Hill’s absence but continued to irritate coach Mick Cronin with his over-reliance on his jump shot and struggles moving down the court. “Running is not his strong suit,” Cronin said, “so he gets tired trying to get back on defense, so there’s a few times he hurt us getting back on defense. But when he takes his time on offense and he passes it out of the post, it really helps our offense. He’s got to lose the 17-footer when he’s supposed to be handing it off and running a two-man game, so those didn’t help us.”