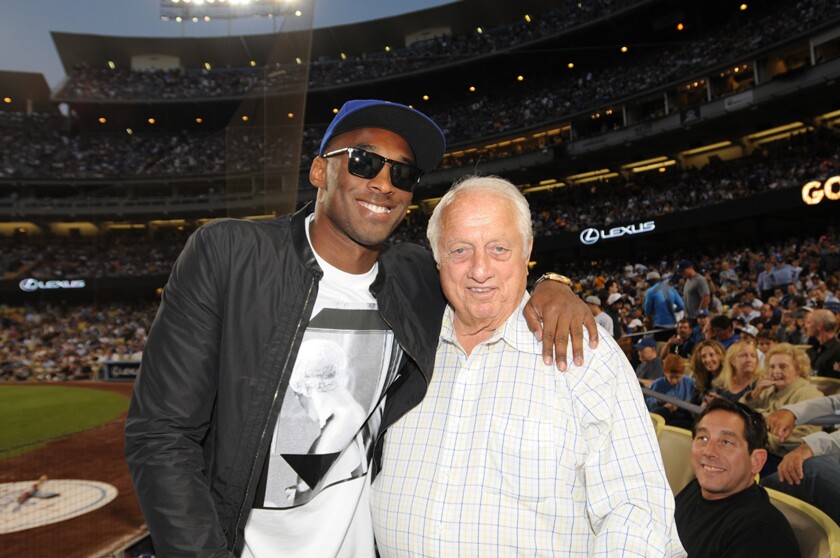 Justin Turner received the news of Kobe Bryant’s death Sunday from his wife, Kourtney, as he packed a van for his charity golf event Monday. The Dodgers third baseman’s initial reaction was like that of many others — he assumed it wasn’t true. He didn’t believe it until he heard radio reports confirming the unfathomable as he drove to Sherwood Country Club in Thousand Oaks near the site of the helicopter crash that killed the 41-year-old Bryant, his 13-year-old daughter Gianna and seven others.

“I was just shaking,” Turner said.

Turner, 35, grew up in Long Beach a fan of the Lakers and Bryant. Everything that left his hand growing up was followed by a “Kobe!” He met Bryant once, before Game 4 of the 2018 World Series, and admired the basketball legend as he seamlessly transitioned from his playing career to the next chapter of his life.

“He was so ambitious about that stuff and had huge plans and you don’t see that a lot of times from superstars when their careers are over,” Turner said. “They just get what they get and want to sit back and relax and enjoy the fruits of their labor, and he wasn’t that guy. He wanted to continue to grow his legacy and be known for more than just a basketball player.

Clayton Kershaw said he met Bryant a few times since he made his major league debut in 2008. The pitcher arrived when Bryant, already a superstar, was on the cusp of back-to-back championships.

“What everybody said about him, you just felt that in the room,” Kershaw said. “As far as his presence and just what he meant to this city. Being here now and playing sports here for the last 12 years, everybody talks about Kobe. That’s like the guy. And so you feel for everybody. You feel impacted even though you didn’t know him just like the millions of people that are watching him playing basketball.”

“To his wife and daughters, I just feel terrible. I hope that they can find some comfort in the legacy he left and just the millions of people that he impacted.”

Turner recalled the way Bryant rebounded from his first playoff experience in 1997 when, at 18 years old, Bryant shot four airballs late in Game 5 of the Western Conference semifinals against the Utah Jazz. The Lakers were eliminated with the loss. He won the first of his five championships three years later. Turner followed along, rooting for Bryant through the years until Sunday’s tragedy.

“I think what he meant to so many people here in Southern California, the icon that he was, in the world, really, it’s just a sad, sad day and it’ll be a sad week,” Turner said. “I don’t know how long it’ll take for anyone to get over it if they ever will because what he did on the court was special and everything that he was doing off the court he was on track to blow what he did on the court out of the water.”