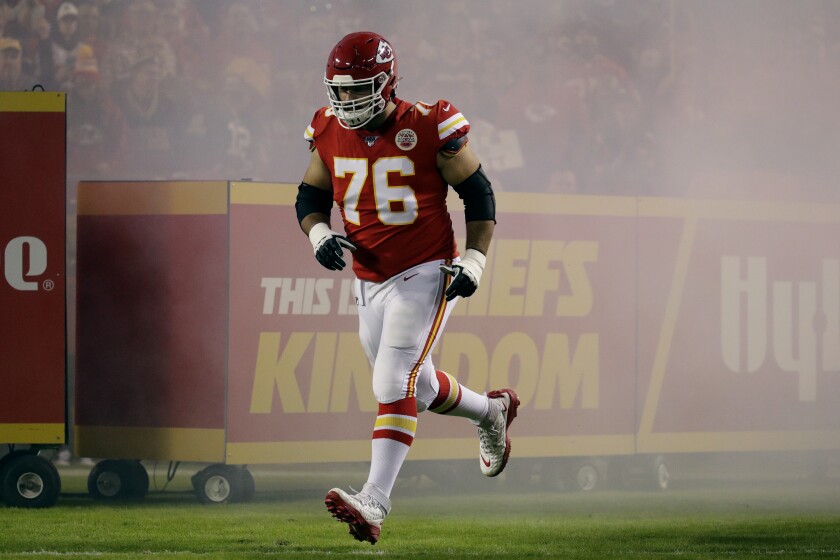 Is there a doctor in the house? Yes, and he’s a pro football player

Laurent Duvernay-Tardif, an offensive lineman for the Kansas City Chiefs, lay writhing on the grass and clutching his left knee. It was a “Monday Night Football” game here at Arrowhead Stadium in 2017, and the 320-pound right guard needed a doctor.

Fortunately, one was close by. Before the medical team could hurry onto the field, Duvernay-Tardif turned his foot this way and that, wincing as he applied pressure to his knee area. The diagnosis: He didn’t have a torn anterior cruciate ligament but a sprained medial collateral ligament, a more benign injury.

“Of course, I was biased, because nobody wants to tear his ACL,” Duvernay-Tardif said. “But I was right; it was an MCL sprain.”

The man knows his medicine. Duvernay-Tardif is the NFL’s only active player who doubles as a physician. The 28-year-old Montreal native graduated from the prestigious McGill University Faculty of Medicine in May 2018 with a doctor in medicine and master in surgery.

In a small-world coincidence, that’s the same school where the mother of Chiefs coach Andy Reid received her medical degree.

“He’s brilliant,” Reid said of Duvernay-Tardif. “Doesn’t take long after talking to him to figure out that he’s on the ball, and he’d be a great doctor. I tell him with those fingers that big, though, man, they’re not going to have him do any small surgeries. He’s a big man.”

Everything about the 6-foot-5 Duvernay-Tardif seems larger than life, from his lumberjack beard and booming laugh to his unconventional childhood — his parents once took their three children on a yearlong sailboat adventure — to the round-the-calendar obligations he has in order to balance two consuming careers.

While he’s an established veteran in the NFL — the Chiefs will host the Houston Texans in the playoffs Sunday — he’s the equivalent of a practice-squad player as a doctor. He has his degree but still has to complete his residency, which typically requires from two to five years. He’s leaning toward emergency medicine.

“I think one of the reasons I did well as a medical student in those emergency rotations is because of what I learned in football,” he said. “It’s that ability to be rational in stressful situations. When you’re a student, you stress. You know your staff is going to quiz you on something, but you never know what’s going to walk through the door.

Early in his NFL career, Duvernay-Tardif had felt out of place. A native French speaker, he started introducing himself as “Larry” to make it easier for teammates who butchered “Laurent,” pronounced LOR-uhn.

“It took me a little longer to integrate fully into the locker room just because of where I was coming from,” said Duvernay-Tardif, who speaks flawless English with a mild French accent. “Not playing the same football, not growing up watching football and knowing the NFL rules. I feel like when you get into an NFL locker room as a rookie, you for sure know somebody that you played against and somebody that you went to a bowl game with. You have connections. I had nobody.”

“I think I kind of stayed true to myself,” he said. “Everything that slowed down my integration as a Frenchman is now what makes me unique in that locker room. I want to stay true to where I come from. I love my culture, so I try to represent it.”

Not all of his efforts to do that have been successful. The NFL denied his request to put “M.D.” at the end of the 15-character last name on his jersey.

Duvernay-Tardif’s sisters also have made names for themselves as athletes. Marilou, 21, is a rower on the Canadian national team hoping to compete in the 2020 Olympic Games in Tokyo. Delphine, 23, trained with the national team in cross-country skiing but gave that up two years ago to start medical school at McGill.

“My parents never pushed me to do anything,” Duvernay-Tardif said. “I feel like if they were really strict about academics, there’s no way they would have let me put medical school to the side to chase the NFL. My parents were all about, ‘Do what you want to do but find yourself a passion.’ ”

To chase his dreams, Duvernay-Tardif first he had to rise from football obscurity in Canada, overcome the snub of not being invited to the NFL scouting combine in 2014, and yet still get scouts to show up to the pro day that he and his childhood friend Sasha Ghavami coordinated.

Duvernay-Tardif and Ghavami, who is now his agent, rented an indoor stadium in Montreal and greeted scouts with coffee and fresh croissants from a bakery owned by Duvernay-Tardif’s parents. Ghavami gave everyone a folder with DVDs of all his games for the McGill Redmen from 2010 to 2013.

When Ghavami was driving to the facility, Duvernay-Tardif pranked him.

“Obviously, I’m nervous out of my mind. It was a big day,” Ghavami said. “Laurent calls, and he sounds very weary. I ask him what’s wrong, and he says, ‘Sasha, I’ve been working at the hospital in pediatrics, and I think I caught the flu. I’ve been up all night with a stomach virus. My blood pressure’s rising, I’m starting to sweat. We’ve got all these NFL teams coming …'

“Then he says, ‘Nah, I’m just messing with you. I’m good, bro. I’ll see you in a half-hour.’ I was so relieved. But the fact that he did that, I could see he was very loose, very relaxed. I thought, ‘This is going to be a good day.’ ”

And it was. Duvernay-Tardif performed well and teams were interested. But medical school too? Some teams didn’t get it.

“A lot of teams were saying, ‘How do we know you’re going to dedicate yourself 100% to the process? How do we know you’re not going to quit when things go bad, because you’ve got medical school?’ ” Duvernay-Tardif recalled. “But with the Chiefs, when I met Coach Reid in my predraft visit, it was like, ‘OK, we know why you play football — because you love it. Otherwise, you wouldn’t be here.’ They saw it as a positive thing.”

Reid validated that interest by selecting Duvernay-Tardif in the sixth round of the 2014 NFL draft, making him the 10th player to be chosen from a Canadian university.

In the four years that followed, Duvernay-Tardif played his way into the starting lineup for the Chiefs while studying medicine in the offseason.

“It’s crazy, honestly,” Chiefs quarterback Patrick Mahomes said. “For him to still be able to go to school and get his [medical] degree and everything like that — how much time you have to put into this facility in order to be as productive as he’s been on the football field. And then to have the offseasons and his spare time and go and be productive in other aspects of life, it really is a tremendous honor for him.”

Duvernay-Tardif has a mentor in former Seattle Seahawks and Kansas City long snapper Dr. Jean-Philippe “J.P.” Darche, a fellow McGill graduate, who spent nine years in the NFL before getting his medical degree at the University of Kansas. Darche is one of the Chiefs’ team doctors.

“For him to do that, he must have had a great work ethic that someone taught him,” Bradley said. “He would have to be incredibly organized. Time management is everything.”

Duvernay-Tardif is quick to emphasize that he’s only beginning as a doctor and that he’s devouring his training as best he can. He was particularly enthralled by his surgical rotations in the operating room.

“I just loved it,” he said. “I loved waking up when the city was still quiet, going to work, putting on your scrubs, doing your rounds, seeing the patients. And then going down to the O.R. starting at 7.

“Just being able to scrub in, intubate the patient myself,” he said of inserting a breathing tube down a trachea. “It’s the little things, like the first time you intubate somebody and it went well and you’re proud of yourself. Or the first time the staff is like, ‘Close the wound. You got this.’ You take your time, but at the same time the anesthesiologist is like, ‘OK, we’ve got to roll. We’ve got another patient waiting.’ ”

Duvernay-Tardif recognizes the irony of being a doctor in a sport that’s under the microscope for its concussions and other brain injuries. He serves on the NFL Players Assn. Health and Safety Committee and has worked with various companies that design equipment aimed at making the game safer.

“Of course I’m conflicted. Everybody is,” he said. “If you ask anybody in the NFL, ‘What do you think about playing a sport where you’re exposed to concussions? Would you let your kids play?’ Everybody has his own questioning. … I’m trying to educate myself as much as I can and keep asking myself the question, ‘Am I all right? Is it still safe for me to play?’ ”

He sustained a concussion in a January 2016 playoff game, and he didn’t play against New England the next week, when the Chiefs lost. He went back to medical school and wasn’t exposed to any football-type contact for the eight months that followed.

“I went through all my exams in medical school, and everything went fine,” he said. “So that was really reassuring for me.”

If teammates ask him about a medical definition, Duvernay-Tardif is happy to help. But he steers clear of diagnosing their injuries or weighing in with opinions.