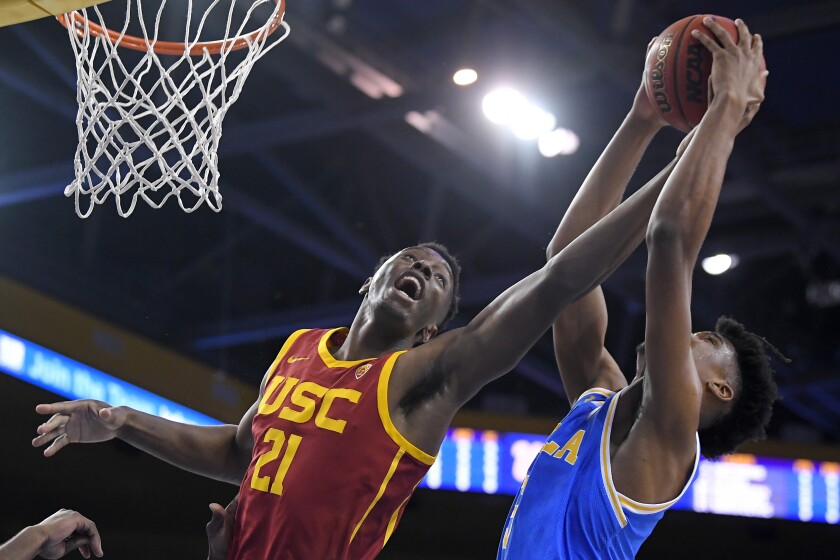 Is there now a blueprint for limiting USC star Onyeka Okongwu?

Twelve minutes had already ticked away last Saturday, before Onyeka Okongwu caught a pass on the Pauley Pavilion baseline and finally lifted up for his first shot of the night.

The star freshman had been USC’s offensive centerpiece all season, pacing the team with an impressive 17 points per game. But a week earlier, Washington’s zone had limited him with pressure in the paint, and now, UCLA was replicating that aggressive defensive approach in man. They clogged the lane and fronted him in the post, keeping him from touching the ball at all.

Okongwu drew two quick fouls, minimizing his effectiveness against the Bruins. When he finally took that shot along the baseline, it soared well over the rim. The UCLA student section roared with an immediate “AIRBALL!” chant.

The freshman would shoot just two more times and finish with just four points, a season low and just the second time he was kept in single digits all season.

The Trojans ultimately didn’t need a big game from Okongwu to down the Bruins, as other scorers seized the reins. Seniors Nick Rakocevic and Jonah Matthews combined for 33 points, while freshman point guard Ethan Anderson carried USC as its floor general early on, adding 14 in the first half alone.

Their performances proved, in part, that the Trojans could stay afloat without their top freshman playing at his best. But as the Trojans return this week to Galen Center, where it’ll open its home Pac-12 slate against Cal and Stanford, getting Okongwu back on track certainly couldn’t hurt USC and its consistently inconsistent offense.

USC coach Andy Enfield still sees little cause for concern, even as Okongwu has contributed just 14 combined over his past two games. Prior to that, against Washington State, Okongwu scored 27 in one of his best performances of the season.

“He’s very even keel,” Enfield said on Wednesday. “He plays as hard as he can. He’s got a great motor, and he’s a team player. He doesn’t care how many points he scores. He won three state championships in high school. No one cared how many points he averaged. He’s a winner.”

But over his past two games, Okongwu has undoubtedly been less effective, begging the question of whether other Pac-12 teams could replicate what UCLA and Washington did to limit him.

Cal (8-8, 2-1) doesn’t have the same size and manpower underneath to exactly follow that blueprint. Where UCLA had three starters over 6 feet 9, Cal doesn’t have one. But the Bears’ slow, halfcourt offense under new coach Mark Fox could throw Okongwu off his rhythm early, especially if they can force him into foul trouble like the Bruins did.

“I didn’t really have enough time to be effective,” Okongwu said of last Saturday’s win.

The more pressing concern comes this Saturday, when Stanford and its league-best defense visits USC. The Cardinal have forced turnovers on nearly 25% of their possessions this season, a better rate than all but 11 teams in college basketball. Not to mention they have a potential All-Pac-12 center in Oscar da Silva to square up with Okongwu.

A return home should help the freshman — and the rest of the Trojans — return to form. USC has played just two true home games since Thanksgiving, but still managed quite well on the road, with four road victories already, after scoring just two all of last season.

“We feel great about our team’s toughness and our defense, how we’ve been able to go on the road and defend at a high level,” Enfield said.

But it’s the offense that remains a question mark. The easy answer, as USC starts its first Pac-12 home stand, is to get the ball to its leading scorer.

Update: Cal looked like one of the worst teams in the conference through December and early January, but swept the Washington schools last weekend. USC has played just two games at Galen Center since Thanksgiving, so the Trojans will gladly welcome this two-game home-stand. The Trojans will need Onyeka Okongwu to bounce back after a quiet, two-game stretch in which he scored just 14 total.