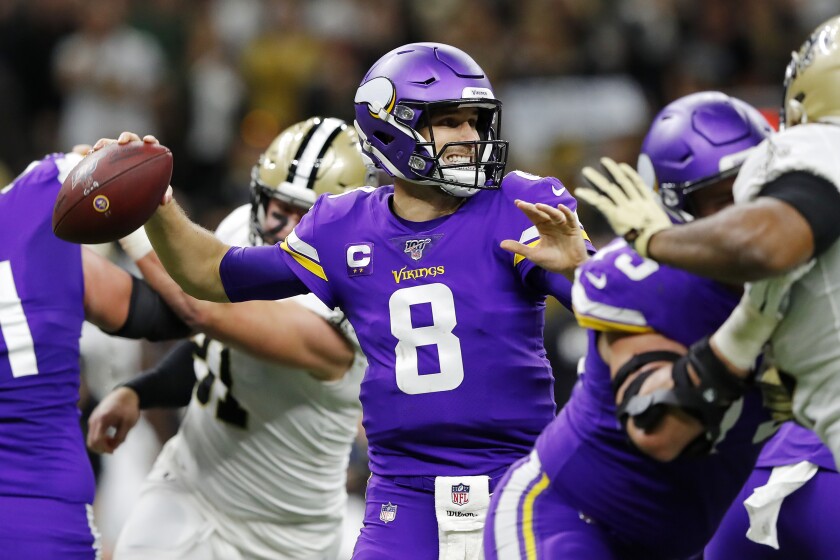 It’s hard not to like Kirk Cousins now. Maligned for his career failures in the biggest games, the Minnesota Vikings quarterback reformed his image Sunday with his first win in the playoffs.

It’s only one game, but that’s the fickle nature of the NFL and the way quarterbacks and teams are perceived. A clown one week can be a Cinderella story the next, and that’s the tale with Cousins, who remains in the underdog role yet suddenly commands more respect.

The Vikings, who stunned the New Orleans Saints 26-20 in overtime in the NFC wild-card round, stay on the road as 6½-point underdogs at San Francisco in Saturday’s opener of the divisional round.

William Hill sportsbooks opened Green Bay as four-point favorites over Seattle in the other NFC matchup. In the AFC, Baltimore is a 9½-point favorite over Tennessee, and Kansas City is laying 9½ to Houston.

“These numbers are inflated a little too high,” said Bruce Marshall, editor of the Gold Sheet. “I usually don’t give a blanket recommendation on one side, but I like the ’dogs in every one of these games. It’s rare to do that and it’s a little bit risky. But this has been the character of the season. This was a season in which road ’dogs covered about 60%.”

In the regular season, road teams finished 135-106-10 (56%) against the spread (ATS), with road underdogs cashing at 58%. On wild-card weekend, the Vikings and Titans were road underdog winners while the Seahawks (pick’em) won at Philadelphia and the Bills (+2½) came up short in a 22-19 overtime loss at Houston.

In the previous two years, road teams covered the spread in all eight wild-card games, each time as underdogs. Still, the divisional round is different with the top two seeds in each conference getting a bye week.

“I don’t know the numbers, but I do know that these teams that stay home and are rested have a pretty good advantage in this second round,” said Chris Andrews, South Point sports book director.

Here are some numbers: In last year’s divisional round, home teams went 4-0 straight up and 3-1 ATS. The Vikings and Titans will try to buck the trend of 12 consecutive losses for road teams in Saturday divisional-round games.

William Hill closed the Vikings as seven-point underdogs at New Orleans, but the line is a half-point lower this week at San Francisco.

“I think seven is a better number,” Andrews said. “I do think the public will come in on the 49ers. I think the game at New Orleans probably took quite a bit out of the Vikings.”

Smart money showed on the Vikings against the Saints, including a $110,000 wager on Minnesota +7½ at the South Point. Andrews said he expects the professional gamblers to support the Vikings again if the line goes to seven.

“The Vikings are dangerous,” Marshall said.

The same can be said of the Titans, who may or may not have ended the Tom Brady era in New England with a 20-13 victory over the Patriots. Next up for Tennessee’s Ryan Tannehill, off his first career playoff win, is a duel against the presumed league MVP, Ravens quarterback Lamar Jackson.

“Baltimore is the superior team, no doubt about it,” Andrews said. “But the Titans are playing exceptionally well right now. If the number gets to 10, I think it’s a play on the ’dog.”

The Texans-Chiefs showdown is a rematch from Week 6, when Deshaun Watson led Houston to a 31-24 win over Patrick Mahomes and Kansas City, which was favored by 3½. The playoff line is a six-point adjustment. Chiefs coach Andy Reid owns an 18-3 career record in the regular season after a bye and is 4-1 in the divisional round after a week off.

The home team has won the last eight meetings between Seattle and Green Bay. The Seahawks are 8-1 on the road this season, but Russell Wilson is 0-3 in his career at Lambeau Field.

“The Seahawks just beat an Eagles team that had a lot of injury problems,” Andrews said. “I was not particularly impressed with Seattle and haven’t been for a few weeks. The Seahawks kind of staggered to the finish. There’s a lot of respect for Russell Wilson and deservedly so. There’s not a ton of respect for Green Bay.

“[Aaron] Rodgers has just been a good quarterback this season, not great. I think this is a good situation for the Packers being at home and rested. I really kind of like Green Bay here.”

The Packers’ Matt LaFleur will be making his playoff coaching debut against veteran Pete Carroll.

But this is a time for firsts and new faces such as Cousins. Of the eight teams still standing, only the Chiefs made it this far last year.