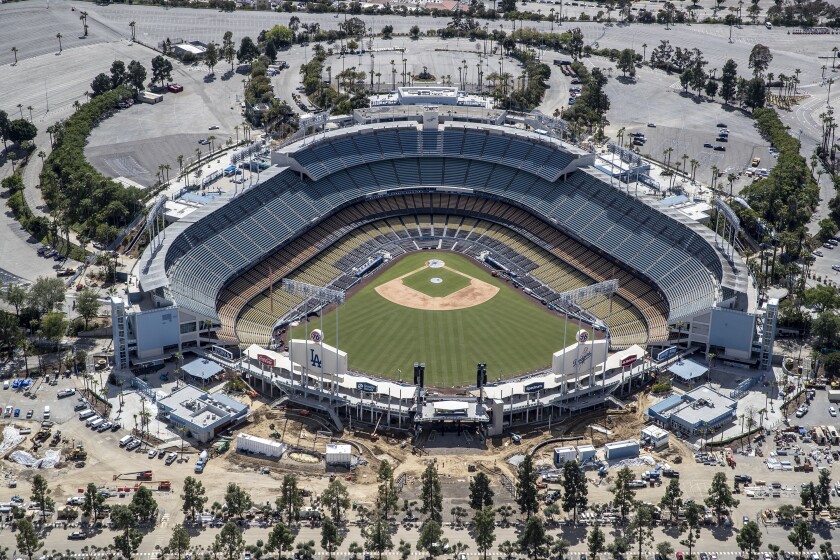 It’s on! MLB players will report to training camps July 1 to prep for 60-game season

Players signed off on Major League Baseball’s health and safety protocols and agreed to report to training camps at their home stadiums by July 1 in preparation for a pandemic-shortened regular season of 60 games.

“All remaining issues have been resolved and players are reporting to training camps,” the MLB Players Assn. tweeted early Tuesday evening.

The season, barring major outbreaks of the coronavirus, will start July 23 or 24 without fans and run through Sept. 27, with players and staff observing strict physical distancing rules.

The postseason is expected to remain at 10 teams — the sides had discussed an increase to 16 — but the designated hitter will be added to the National League this season in an effort to protect pitcher health.

To minimize travel, MLB has submitted a schedule for union approval that will feature 40 games against division opponents and 20 interleague games against the corresponding geographical division — NL West vs. American League West, NL Central vs. AL Central, NL East vs. NL East.

All extra-inning games will start with a runner on second base beginning in the 10th inning in order to prevent marathon games that could extend time at the park, lead to injuries and tax rosters.

Clubs can invite up to 60 players to training camp, and rosters will be expanded from 26 to 30 for the first two weeks of the season. The traditional July 31 trade deadline will be pushed back to Aug. 31.

All remaining issues have been resolved and Players are reporting to training camps.

Spitting is prohibited, including sunflower seeds, but chewing gum is permitted. Fighting and instigating fights are strictly prohibited.

The agreement will allow any player who is considered high-risk for severe complications to COVID-19 — those with underlying conditions such as Type 1 diabetes or heart problems—to opt out of the season and still collect his salary and service time.

“Major League Baseball is thrilled to announce that the 2020 season is on the horizon,” Commissioner Rob Manfred said in a statement. “We have provided the Players Association with a schedule to play 60 games and are excited to provide our great fans with baseball again soon.”

The usual 162-game, six-month marathon that rewards teams like the Dodgers for their depth and endurance will be replaced by a 60-game, two-month sprint that could allow a lesser team to ride a hot streak into the playoffs.

“There are going to be surprises, that I can guarantee you,” Hall of Fame pitcher and television broadcaster John Smoltz said Tuesday on a conference call for an upcoming celebrity golf tournament. “And those surprises might be refreshing in a sense that you didn’t see that coming three months ago.”

The Ducks will unveil a complementary work/live/play district anchored by the Honda Center, which combined with the Angel Stadium projectm, adds up to 250 acres.

The Dodgers, with their rotation of Walker Buehler, Clayton Kershaw, David Price, Alex Wood and Julio Urias, have such a deep pitching staff that 2018 All-Star Ross Stripling probably will open the season in the bullpen.

The Angels’ rotation is thinner, with Shohei Ohtani (Tommy John surgery) and Griffin Canning (elbow) returning from injuries and Andrew Heaney, Julio Teheran and Dylan Bundy expected to round out the group.

But in a short season, that deficiency could be offset by first-year manager Joe Maddon’s creative use of a deeper bullpen anchored by Hector Robles, Keynan Middleton, Ty Buttrey and Cam Bedrosian.

“There could be some scenarios where the pitching staffs that wouldn’t be able to do what they could over 162 games might do something different for 60 games,” Smoltz said. “So, I think you’ll see some creativity that will allow a team to [improve their chances of making] the playoffs.”

As MLB teams prepare to play in 10-team regional divisions intended to limit exposure to the coronavirus, they must reckon with an alarming trend.

The Colorado Rockies finished fourth in the NL West with a 71-91 record last season but went 37-23 during a 60-game stretch from April 14-June 21. The World Series champion Washington Nationals, remember, were 19-31 through their first 50 games of 2019.

A greater sense of urgency will be attached to each game, each series, each week, in a shortened season, forcing managers to be more aggressive in how they use their bullpens and less patient with struggling hitters.

“The teams that were great before this happened are still going to be great, but there’s going to be a lot more pressure on them, because in a 60-game schedule, I think you’ll have 25% more teams that can compete that had no idea if they could compete for 162 games,” Smoltz said.

“So, you’re going to see more teams have a chance in a 60-game schedule. I think it’s going be awesome. The older players are going to be refreshed, the younger players will be super anxious to get out there. There’s going to be different strategy and how you manipulate the roster. I think it has a chance to be unique.”