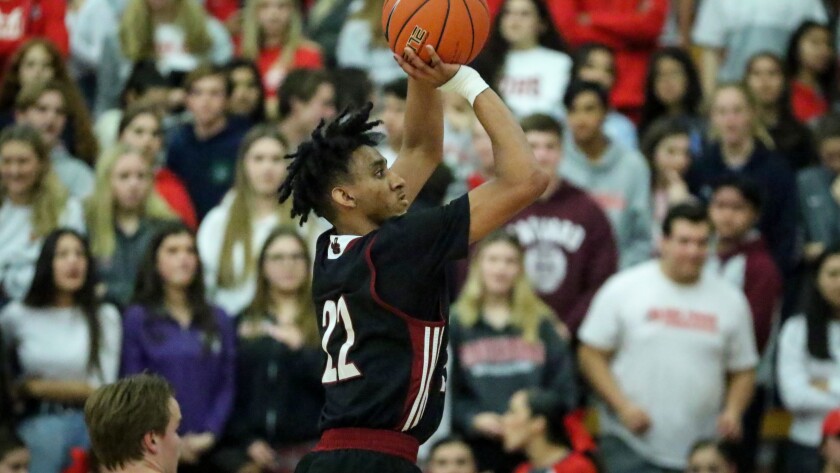 Ian Martinez wants to be the first player from Costa Rica to play in the NBA.

It’s a lofty aspiration for the San Juan Capistrano JSerra High guard, who migrated to Southern California four years ago. Costa Rica is not known for its basketball. The country has never qualified for the Summer Olympics or the FIBA World Cup. Only a handful of Costa Ricans have played college basketball in the United States and even fewer have played at the Division I level. But Martinez will be the third in his family to join the Division I ranks when he suits up for Utah next year.

Martinez is from the country’s first family of hoops. His uncle, Kay, played at Jackson State and is a member of the Costa Rica national team. His parents, Hellen Carrillo and Henry Martinez, both played with the national teams and ran the ProBasket Academy in their home country. Ian’s older brother, Avery, is at CSUN on a basketball scholarship.

Ian has the potential to surpass all of their accolades. He has explosive athleticism that is rarely seen and he plays like he has to prove himself every night. He continues to mold and develop his game, adding and refining elements, which has turned him into one of the Southland’s most dynamic weapons.

“He’s a special player,” said Pat Barrett, the founder of the Southern California All-Stars AAU program Martinez plays for. “To me, he’s the most athletic kid that I’ve ever had.”

That’s high praise considering NBA stars DeMar DeRozan, Brandon Jennings, Tyson Chandler and Arron Afflalo are just a few of the many players who have starred for the Southern California All-Stars.

“When I saw him, that’s kind of what attracted me. Like ‘Oh boy! This kid could be something.’ He could tip dunks and dunk on people and stuff during the game,” Barrett said. “I remember Russell Westbrook when he was at UCLA, kind of did the same thing. He didn’t average many points. But boy, every so often he’d come up with a monster athletic dunk where you sat there and said, ‘Oh my gosh, that’s pretty special.’ “

“We’ve had a lot of athletic players, but Ian tops all of them,” he added. “Then skill wise, he’s just getting so much better — shooting the ball, creating a shot, taking the ball to the basket. He can score in many ways. He couldn’t really do that when he was a freshman or sophomore. But the last two years, he’s really elevated his game.”

Martinez is scoring 23.9 points per game as a senior while shooting 50% from the field and 43% on three-point attempts. He is averaging 7.8 rebounds, 4.1 assists and 2.3 steals. Three times he’s earned tournament MVP honors after leading the Lions to a tournament title, including scoring 35 points with 12 rebounds and five assists in the North Orange County tournament championship matchup against Lakewood Mayfair and No. 11-ranked prospect Joshua Christopher.

“He has been incredible,” JSerra coach Keith Wilkinson said.

The journey wasn’t always incredible though.

Avery had spent his freshman year in Georgia at Sandy Creek High but ran into visa issues before finding a home at Cantwell-Sacred Heart of Mary High in Montebello. Ian moved to Southern California before his freshman year, joining his brother a year later. He struggled with the transition initially as the two lived with a host family.

The family stayed in contact through a group chat and occasional trips on visitor visas. Things began looking up after Ian’s sophomore year. He transferred to JSerra after Avery graduated from Cantwell-Sacred Heart. The family was eventually able to procure an O-1 visa that is provided to “individuals with extraordinary ability or achievement” thanks to an application that featured more than 100 pages of documentation. Hellen, Henry and their daughter were able to join their sons in Southern California. Henry began coaching for the Southern California All-Stars organization until he was hired as an assistant by Utah two days after Ian committed to the Utes in May.

Ian earned a lot of attention soon after when he made the all-star game at the Pangos All-American camp and had a strong showing at the NBA Top 100 camp.

“Ian really came into his own and it really gave him the confidence after going to those camps and doing so well with the best players from all over the country,” Barrett said.

Schools such as USC, who Martinez said was his dream school when he arrived from Costa Rica, and Arizona pushed for him even harder, but Utah had been one of his first scholarship offers. He said he felt Larry Krystkowiak and the Utes had sacrificed more time and effort to recruit him.

“I started really thinking about what I needed in my future and what will help me through this journey and trying to complete, trying to get to my dream of the NBA,” Martinez said. “I realized I needed to have good people around me. When I went over there to Utah, I felt like they were the right people to go to. They recruited me hard since the first day that they saw me. I know that the coaches are really good and they really develop the guys. So we just built a really good relationship and that’s the place I want to be.”