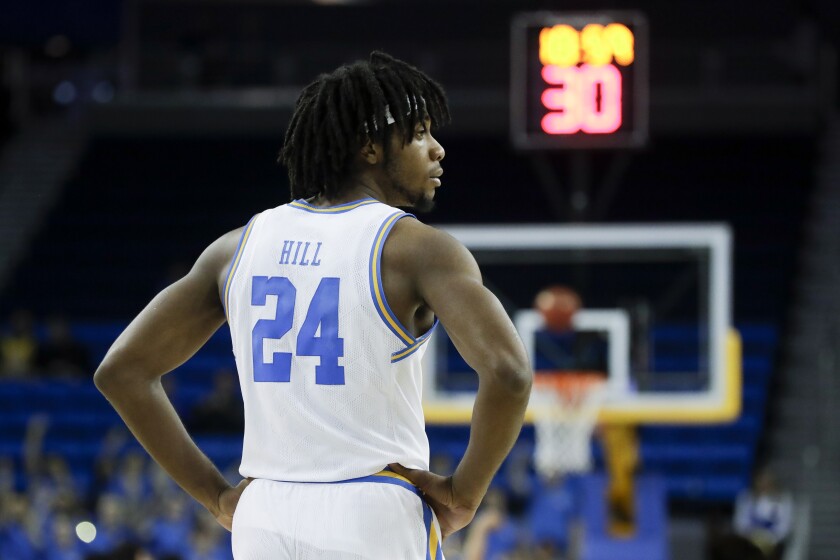 Early in the season, before UCLA closed its practices to the media, reporters could predict the first player they would see when they walked into the Mo Ostin Center.

Jalen Hill would invariably be working on his post moves or his jumpers prior to the start of each session, appearing on the court well before any of his teammates.

It was the sort of extra effort the redshirt sophomore forward wouldn’t always carry over to games. Coach Mick Cronin singled out Hill earlier this month for jogging back on defense against Washington State, allowing the Cougars to throw an outlet pass over his head for a layup.

As the calendar creeps toward February, it’s becoming less of an issue. Hill moved back into the starting lineup last week as part of Cronin’s ongoing efforts to identify his best players and responded with sustained energy in back-to-back games.

Hill followed a 14-point, 12-rebound effort against Stanford with an 11-point, six-rebound, four-steal, three-assist smorgasbord against California. Perhaps the biggest reflection of his exertion was his eight deflections against the Cardinal and 10 against the Golden Bears.

“All he has to do to have a career in this game is play hard all the time,” Cronin said Tuesday before referencing a workmanlike Clippers forward that Hill could emulate. “He’s just got to try to become Montrezl Harrell. That’s it. That’s all he’s got to do.”

Hill was refreshingly introspective when asked about his susceptibility to lulls, acknowledging that he didn’t always give full effort.

“I get lazy a lot, so that’s just something I’ve got to work on,” Hill said. “You’ve just got to go home and look in the mirror and be like, ‘What are your flaws, what can you do to fix them and help the team win?’”

One problem has been a tendency to sag his shoulders and momentarily linger in the backcourt after committing turnovers, something Cronin has tried to address by telling Hill to move on to the next play regardless of what happens.

“You can see how visibly he gets upset with himself,” Cronin said. “Well, I need you to worry about getting back on defense. You threw it away, get back and block a shot. It’s part of young guys growing up.”

The Bruins have increasingly played through Hill on offense as he’s developed a reliable jump hook through workouts with assistant coach Darren Savino and walk-on guard Armani Dodson. It’s a move he repeatedly went to Sunday against Cal while scoring all 11 points in the first half.

Hill also displayed the downside of relying on someone who isn’t used to being a go-to guy. He often gets so excited whenever he gets the ball near the basket that he’ll rush to make a move, throwing a bad pass, shuffling his feet for a traveling violation or bowling over a defender for an offensive foul. He had four turnovers in each of his last two games.

“He’s learning how to take his time,” Cronin said of a player averaging 9.9 points and 7.3 rebounds a game, both career highs. “You can just tell a guy who’s played with the ball his whole career and a guy who it’s new for him, and it’s new for him.”

Cronin called Hill a microcosm of his young team because of his need to sustain high-energy play. Playing harder, the coach said, will lead to playing smarter and decreasing mistakes while heightening his ability to go all-out for longer stretches.

“I’m out there asking him to do things for 32, 35 minutes at a high level for the first time in his career, so there’s going to be mistakes,” Cronin said. “My whole thing with him, you’ve got to stand in there and fight and keep scrapping. If you do, we’ll get some wins and he’ll become who he wants to become as a player.”

Redshirt senior guard Prince Ali returned to practice Tuesday after rolling his right ankle in practice Friday and sitting out the game against Cal.