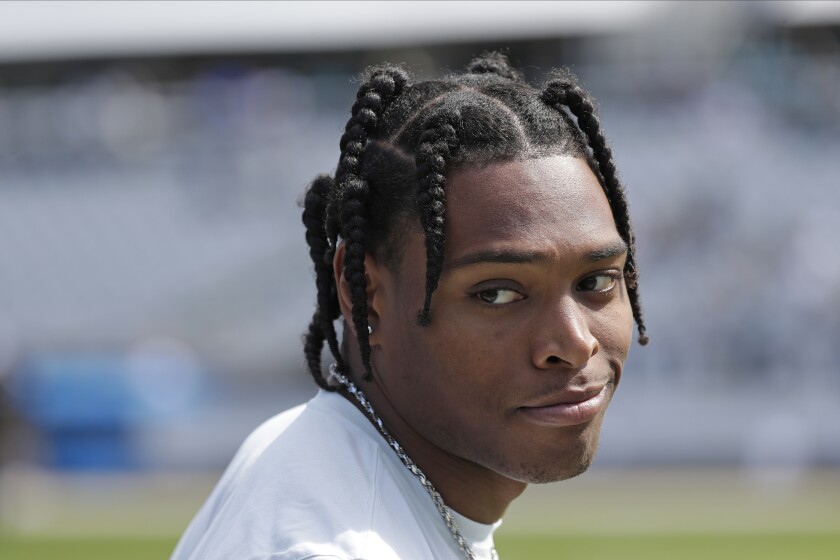 Jalen Ramsey had some hot takes on QBs last year. What did he say about Jared Goff?

Now that Jalen Ramsey is a member of the Rams, let’s go back and revisit some of the brutally honest things the outspoken cornerback said about many of the quarterbacks around the NFL in a GQ interview in August 2018.

Come on, it’ll be fun. What are you worried about? That maybe the two-time Pro Bowler said some not-so-nice stuff about Rams quarterback Jared Goff that might lead to some awkward moments in the locker room now that they’re teammates following Tuesday’s trade between the Rams and Jacksonville Jaguars?

It’s not like Ramsey came right out and said someone “sucks.” Oh wait, yes he did (then-Baltimore Ravens QB Joe Flacco).

OK, at least he didn’t call anyone “trash.” Hold on, he did that too (Buffalo Bills QB Josh Allen).

Well, it’s too late to turn back now. Let’s see what he said about Goff, who was coming off a breakthrough 2017 season in which he completed 62% of his passes for 3,804 yards with 28 touchdowns and seven interceptions for a passer rating of 100.5.

Good news — Ramsey went easy on the guy, calling him “average to above average.”

“Jared Goff, he’s average to above average. He reminds me of [San Francisco 49ers quarterback] Jimmy Garoppolo a little bit. Year one, he wasn’t good. He wasn’t even good enough to earn his own starting role. Like, if you the No. 1 pick, you expected to start now. Period. He wasn’t ready to do that. He wasn’t able to do that. Then when he did get in, he didn’t really do that good. But in his second year, they got a new offensive coordinator. Your offensive coordinator is just your brainiac. When we played them, it felt like his offensive coordinator was drawing up perfect plays and then he was hitting the open man. For what his team asks him to do, yeah, he’s good.”

And, hey, guess what? Tuesday’s trade also reunites Ramsey with former Jaguars quarterback Blake Bortles, who is now Goff’s backup. Just for fun, let’s see what Ramsey told GQ about Bortles, who faced a lot of criticism during his five years as Jacksonville’s starter but was just coming off a season in which he helped the team reach the AFC Championship Game.

“People say Blake sucks, but he took us to the AFC Championship Game off strictly doing what was just asked of him: not turning the ball over, running Leonard [Fournette] to death, letting the defense get some turnovers, and putting us in a good field position to capitalize on,” Ramsey said. “That was what we asked him to do. Playoff Blake is good. People can say whatever but playoff Blake is good.”

See, that wasn’t so bad. It definitely could have gone a lot worse.