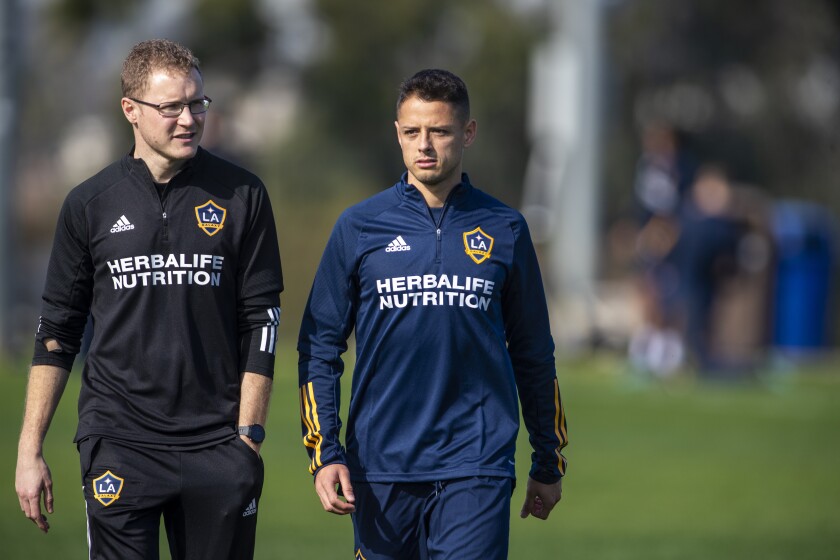 The Galaxy paid the highest transfer fee in franchise history to acquire Javier Hernández, then gave him what could prove to be their second-most-lucrative contract ever, all to replace Zlatan Ibrahimovic, the most dominant player the team has ever had.

But if that sounds like enormous pressure, Hernández said he has nothing to prove.

“I don’t want to show no one. I just want to enjoy my playing time,” he said between the team’s two workouts Friday that ended his first full week with the team. “I never go out to make someone happy or not. I just want to do [the] best I can to help my team, my teammates, my manager. And then obviously if we do that all together, we win games.

“So I don’t have any pressure. Because I love playing football.”

And giving the reception he has received so far, Southern California loves him almost as much. More than 1,000 fans flooded the Tom Bradley Terminal at Los Angeles International Airport to greet Hernández on his arrival from Spain last week, while 160 media members were credentialed for his standing-room-only introductory news conference the next day.

“It’s been very good,” he said of a whirlwind first week in Southern California.

Good, but not perfect. His visa application is still pending, so he’s not able to participate fully in team workouts, a situation he and the Galaxy hope to have resolved by next week. And Hernández and wife Sarah Kohan expect to be renters, perhaps into the summer, as they search the Westside for a house to share with their 7-month-old son, Noah.

“It needs to be like the house, that we’re going to love,” he said enthusiastically. “We’re not going to take just any house.”

Hernández brings enthusiasm to most everything he does, from answering questions in a rapid-fire staccato, in both English and Spanish, to the boundless energy he brings to the field, where he is the Mexican national team’s all-time leading scorer and a veteran of three World Cups.

But after a 10-year European tour that took him to some of the continent’s biggest teams — Manchester United, Real Madrid, Bayer Leverkusen and West Ham United — Hernández found himself on the bench at Sevilla. So when the Galaxy called, he listened.

As the most popular Mexican player of his generation, he always knew MLS was in his future. He just didn’t expect that future to arrive when he was just 31.

Now that it’s here, though, he’s making the best of it.

His wife, an Australian who graduated from Notre Dame and has reportedly taken exchange courses at Columbia and Harvard, likely will be more comfortable in California than she was in Spain, which is a plus. And the move brings Hernández and his young son closer to family in Guadalajara.

“Yeah, it’s a very important thing for me,” he said. “But it’s a very good opportunity for me speaking about football.”