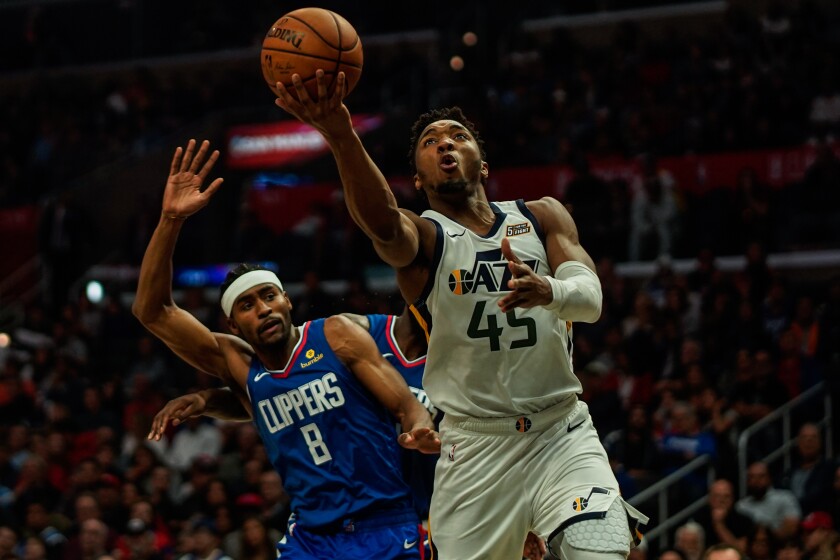 Early in the second half Sunday night, Kawhi Leonard deployed the massive mitts attached to his wrists and snatched the ball right out of Bojan Bogdanovic’s hands. He coasted down the court for an easy one-handed slam.

This is what a superstar does, what it looks like when one player is so dominant and so much better than nearly everyone around him.

You don’t see it that often. And then people in Staples Center saw it again on the next play.

Utah third-year guard Donovan Mitchell calmly extinguished that momentum, gliding behind a screen and hitting a high-arching three-point basket for a quick answer.

It was a preview of the fourth quarter of the Clippers’ 105-94 victory, Leonard getting whatever he wanted on one end with Mitchell answering for the Jazz nearly every time.

Sixteen of Mitchell’s 17 points in the fourth quarter came on possessions right after the Clippers scored, meaning that when things mattered most, Mitchell was there to try to make them happen.

Leonard, a two-time NBA Finals most valuable player, had 18 points in the quarter.

“You really don’t think about [going toe to toe] in the time. For me, I’ve always looked at Kawhi as one of the best players in the league. For me, it’s special,” Mitchell said. “But unfortunately we didn’t come up with a win. I think that’s where my head is at.”

In a lot of ways, Mitchell is sort of “next-up” in the Western Conference, a high-scoring guard who has improved each season and seemingly is primed to move to another level.

With Stephen Curry and Klay Thompson injured, and Russell Westbrook looking at a slightly reduced role next to James Harden in Houston, Mitchell has a clear path to his first All-Star berth in February. And the potential for greater honors is there, too, though that’s tied directly to Utah’s success. And there are plenty of reasons to believe the Jazz will win a lot this season.

Sunday, Mitchell ran out of gas. Only two of his teammates scored in the fourth quarter, and as the Clippers pushed ahead late, Mitchell faltered with jumpers rattling out, tough shots not falling and key turnovers stopping any chances for a comeback.

After one turnover, Mitchell went to the ground, his arms wrapped around Montrezl Harrell. And after being called for a foul, he stood up and clapped his hands together while shaking his head.

He knew that he could’ve done more — been a bigger factor on the glass, a little tighter with the ball and a little closer to perfect on defense.

It’s one of the things that makes Mitchell so interesting, that everyone still thinks he can do more, even if there aren’t obvious places to improve.

The only active players to average more points than Mitchell did over their first two seasons are LeBron James, Vince Carter and Kevin Durant.

It’s sort of like a golfer who is trying to improve — it’s a lot easier to move from a 20 to a 15 handicap than it is for someone who is a five handicap to become a scratch player. It’s why people around the Jazz are looking for Mitchell to improve in more subtle ways.

“As you see someone who is getting [the] results that Donovan has gotten, I think it turns to more efficiency,” Jazz coach Quin Snyder said before Sunday’s game. “And part of efficiency is playing on both sides of the ball, the impact you have on the game. And I think that’s something he’s really been focused on this year. I think he’s defending extremely well and picking his spots offensively.”

Utah’s decision makers have a hand in helping Mitchell become more efficient this season. They traded for Mike Conley and signed Bogdanovic to help ease the offensive burden that Mitchell has carried for a team that’s more concerned with defense.

And his experience will only increase.

“The game will continue to slow down for him, whether it’s reading pick-and-roll, at the rim or finding the open man. But I like how aggressive he is,” Snyder said. “Sometimes, it’s OK for the game to be fast and for him to attack with force.”

Through seven games, Mitchell is scoring more and shooting less. He’s answering questions about his efficiency. And, even though the Jazz have lost three times, two of those have been tight games at Staples Center.

“You could feel that he came into this season ready physically, mentally. He’s got two years of education behind him. You could feel that in his play,” Clippers coach Doc Rivers said before the game. “He’s so comfortable in his game right now.

“Whatever that [next] jump is, he’s going to make it this year.”