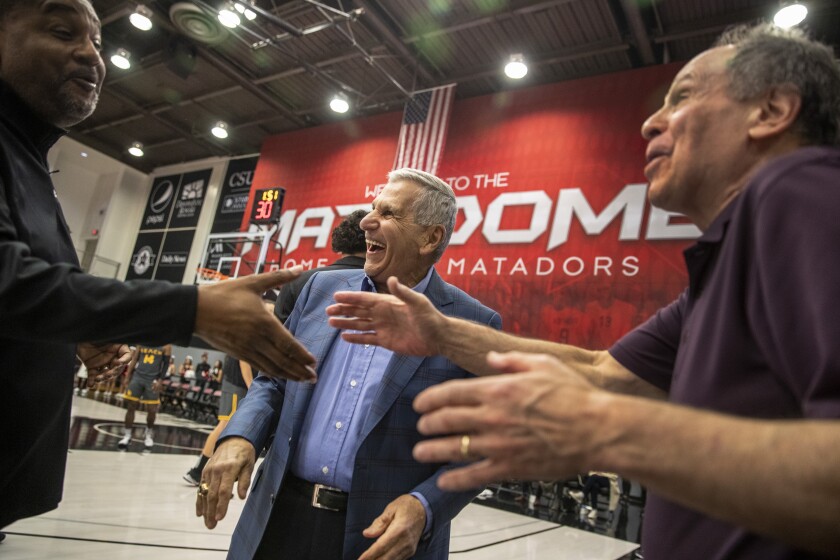 The national championship basketball coach from UCLA sits in the bleachers at Cal State Northridge.

He points to the first folding chair in a row of seats designated as the CSUN basketball bench.

This is where Jim Harrick, at the ripe young age of 81, works as an assistant coach for the Matadors.

Twenty five years after he led UCLA to its last national title, this is just one of the spots where one can find this city’s underground sports legend.

He has been seen at Dodger Stadium hugging Dave Roberts, on a Hollywood set hugging Lamar Odom, in a downtown clothing store hugging the owner. He is greeted by fans on regular walks around the Rose Bowl, on visits to a La Crescenta grocery store, and even recently by an awestruck cop who stopped him for speeding.

The UCLA championship coach seemingly has a spot in every corner of town except UCLA.

One season after his team’s 1995 national title, Harrick was fired for falsifying an expense report for a dinner with recruits and allegedly lying during the investigation, including allegedly asking assistant coach Michael Holton to lie for him.

It was startling. It was messy. There was finger pointing.

“My life hasn’t been all freeway,” Harrick acknowledges. “There have been bumps in the road.”

The bump in Westwood has since become an indelible pothole. Time has not healed all wounds, but exacerbated them.

UCLA has a star-filled athletic Hall of Fame located in a glittering corner of the J.D. Morgan Center featuring 312 honorees.

Harrick is not in it.

“That’s ridiculous,” says Bruins Hall of Famer Don MacLean. “How many coaches at UCLA have won national basketball championships? He’s one of two. And he’s not even in our Hall of Fame? C’mon man.”

UCLA has never recognized Harrick in any formal way aside from allowing him to join his championship team on the court to commemorate the 20th anniversary of the title five years ago.

“Coach Harrick has been in the shadows, he doesn’t get the credit he deserves,” says Bruins Hall of Famer Ed O’Bannon. “How he’s not in the UCLA Hall of Fame is beyond me.”

Even while coaching at CSUN, Harrick constantly promotes UCLA. He shows off his championship ring. He has endowed a basketball scholarship that still exists. He is still one of UCLA’s best ambassadors.

Yet he’s never been asked to represent the university in any capacity beyond receiving the usual invitations offered to boosters.

“Jim loves UCLA, he lives UCLA, he loved his time there and yet I’ve never felt like the school has done enough to bring him back around and promote him,” says Mark Gottfried, CSUN coach and former Harrick assistant with the Bruins. “It’s a weird deal. Everybody loves him except UCLA.”

Harrick is asked about his current relationship with a university where he has experienced both the highest of honors and deepest of shame. He winces. He understands the complexities. He knows the realities.

Some would say UCLA is in a tough situation. After all, how do you embrace a guy you once fired for violating an ethical conduct clause in his contract?

Others might say UCLA is in a stubborn situation. Isn’t there a statute of limitations on a falsified expense report and an alleged cover-up? No laws were broken, no NCAA probation occurred. Isn’t a quarter of a century enough time to forgive and forget and celebrate their only coach to win a national men’s basketball title in the last 45 years?

“What was done to him was unfair and unwarranted, if it was Coach K [Duke’s Mike Krzyzewski] or somebody of that stature, they would have never released him for the so-called violations,” says Bruins Hall of Famer Toby Bailey. “That’s nuts that he’s not recognized more, and that has to change.”

The fans have clearly moved past the controversy. When Harrick walked into a luncheon for his mentor John Wooden eight years after being fired, he was given a prolonged standing ovation. When the video board at Pauley Pavilion showed him sitting at a UCLA basketball game a couple of years ago, he was given a similarly huge ovation.

Harrick is one sports figure in town who has virtually no detractors. He’ll talk to anyone and laugh with everyone. Even that awestruck cop was a USC fan. For those who were around long enough to remember him, Harrick is like everyone’s favorite uncle.

“He wasn’t just a coach for us for four years, he’s been our coach for life,” says Tyus Edney, another Bruins Hall of Famer. “I’d advocate for him to be in the Hall of Fame, of course, because we’re not in without him.”

When asked about Harrick’s exclusion from the Hall of Fame, which is chosen by a group of 22 voters, including former student-athletes and coaches and Hall of Fame members, a UCLA spokesperson said in a statement: “Out of fairness to all nominees and potential nominees, we do not comment on the status of any individuals.”

“It’s not lost on us that Jim Harrick is the only coach since Coach Wooden to have led us to a national championship in men’s basketball. We continue to enjoy every opportunity to celebrate the success of the program under his leadership. There’s no question his on-court accomplishments play a tremendous role in the history of UCLA men’s basketball and UCLA athletics.”

He’s right, there is no question about Harrick’s on-court accomplishments. In his eight seasons with the Bruins, his teams went 192-62, a 76% winning percentage that ranks second to Wooden among UCLA coaches who have coached at least 62 games.

Harrick’s teams also made the NCAA tournament every year he coached, an accomplishment unmatched by any Bruins coach since then. In a coaching career that began at Morningside High in 1964, he has sent more than 40 players to the NBA.

”He’s like Yoda,” says Edney. “He sees everything, he makes all the right adjustments, and he knows exactly what to say to you at just the right time.”

Those words led, of course, to the greatest shot in UCLA basketball history. In the second round of the 1995 NCAA tournament, Harrick ordered Edney to drive the length of the court in the final 4.8 seconds of a game against Missouri. Edney did as he was told, and scored the winning basket on a banked layup at the buzzer.

“Coach Harrick empowered me to take and make that shot,” remembers Edney.

Harrick remembers the look on his players’ faces as they came to the bench during a timeout with 4.8 seconds left and trailing by one.

“Ten eyes riveted on me, looking at me, I had prepared my whole [life] for that moment,” he says. “I knew exactly what we had to do.”

Ever since he watched the Lakers’ Jerry West drive the length of the floor and score in a few seconds against the Boston Celtics, Harrick had ordered his team to practice that play. Nearly every day in practice, Edney would be timed as he raced down the floor. Nearly every day, he scored in less than five seconds.

“I knew he was fast enough to get there so I told him, ‘You get the ball and take it the length of the floor and shoot the ball,’ ” Harrick remembers. “Then I put my arm around him as the timeout was ending and told him, ‘Do you have a crystal clear understanding of what I said?’ ”

At that moment, Harrick remembers O’Bannon walking behind them screaming, “Get me the ball!”

Harrick looked back at Edney and said, “No, I want you to shoot the ball, son.”

The rest is, of course, UCLA history, the title, a national morning show appearance, a school celebration, a Disneyland parade, Jim Harrick thinking it would never end.

“We had the talent, we had the recruits, if we stayed together we were going to be good for a long time,” he remembers.

Then the following season they lost Princeton in one of the tournament’s greatest first-round upsets and Harrick never had a chance to coach another UCLA game again.

Today, Harrick admits to falsifying the expense reports — “I was told if it was over $25 to put some extra names on there, I was doing what I was told, everybody did it” — but he denies lying about it.

Harrick claims late athletic director Peter Dalis never liked him. Dalis once pointed to a contract extension given Harrick one year before his firing as proof otherwise.

In this column space at the time, I supported the firing. I wrote that Harrick’s increased recklessness had made it impossible for him to continue.

Shortly before the expense report issue, the program was shaken when the Los Angeles Times reported on a questionable sale of a Chevy Blazer to then-recruit Baron Davis’s sister Lisa Hodoh by Harrick’s son Glenn. The NCAA cleared the program of any wrongdoing, but Harrick did not immediately tell Dalis of the sale, infuriating his boss.

The incidents seemingly painted a picture of a coach who could no longer work with the administration.

“They got it right,” I wrote of UCLA officials. “They fired their basketball coach because they no longer trusted him.”

Harrick was hurt deeply by the events, and what the perceived as a failure of UCLA to support him after all of his winning contributions. In some ways, he’s still hurting.

“I don’t think you ever get over it,” he says quietly. “The wound heals but the scars never go away.”

So much has happened since then. So much time has passed. Harrick returned to coaching a year later at Rhode Island, then Georgia, then he finally returned to Los Angeles to retire before last season when Gottfried convinced him to sit in the lead chair at CSUN, from where he coaches, among others, his great nephew Brendan Harrick.

Harrick lost his beloved wife of 49 years, Sally Lee, from complications of scleroderma in 2009. He has since remarried, and he and wife Allyson together share nine children and 23 grandchildren. He walks, he plays golf, and he still works basketball so hard that last season he became one of the oldest coaches in history to be assessed a technical foul when he yelled at an official.

“I made a fool of myself jumping up and down,” he says with a laugh. “It was embarrassing.”

But his life is good, he’s not complaining, and certainly isn’t worrying about a lack of attention from his old school.

Yet he will seemingly forever be consigned to celebrate that title from those shadows, the fairness of which is adeptly questioned by someone a lot smarter than me.

Ed O’Bannon was not only the most outstanding player in that 1995 Final Four and college basketball’s Wooden Award winner, but through his celebrated lawsuit he has since become a powerful and important voice for NCAA athlete empowerment.

One more time, he is standing up for his old coach.

“Enough time has passed, personalities have come and gone, whatever beefs there were 25 years ago should be gone, they should have been squelched a long time ago,” says O’Bannon. “Jim Harrick loves the program, he loves the school, he represented them great … enough time has passed ... give coach his due.”