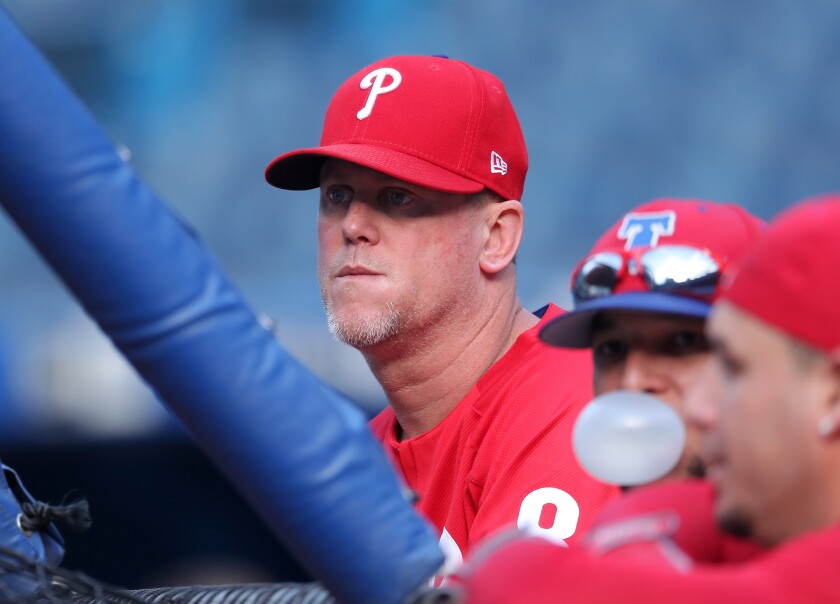 Shawn Wooten won a World Series with the Angels and cut his teeth as a coach in the farm systems of Southern California’s three MLB teams. He returned to the major leagues as the Angels’ assistant hitting coach in 2019 after spending the previous season helping struggling outfielder Kole Calhoun build a new swing. .But he won’t be coming back to Anaheim. Former Philadelphia Phillies hitting coach John Mallee will take Wooten’s place and reunite with new Angels manager Joe Maddon, who had Mallee on his Chicago Cubs coaching staff.

The Angels also have tabbed former New York Mets manager Mickey Callaway as their new pitching coach. Nearly everyone else from the Angels’ 2019 staff is likely to stay. Third base coach Mike Gallego might fill the vacancy at bench coach. Hitting coach Jeremy Reed, hitting instructor Paul Sorrento, first base coach Jesus Feliciano, bullpen coach Andrew Bailey and catching coach Jose Molina all are expected to return. It is still unclear if coaching assistant Matt Martin will remain. Third base duties will be handled former Cubs coach Brian Butterfield. Former Cubs strength coach Tim Buss will also reunite with Maddon in Anaheim in a role that has not yet been defined.

People with knowledge of the Angels’ coaching decisions provided information on condition of anonymity because they were not authorized to speak publicly.

The change on the hitting side emphasizes the Angels’ desire to augment the level of coaching experience in the dugout, a shift that became apparent when they fired manager Brad Ausmus and pitching coach Doug White after one year in Anaheim.

Mallee, 50, carries a favorable pedigree that spans more than 20 years. He worked for Maddon’s Cubs from 2015 to 2017 after stints with the Miami Marlins and Houston Astros. During the Cubs’ run to the 2016 World Series championship, he received praise from All-Stars Kris Bryant and Javier Baez that was similar to the accolades given him by former Marlins star Giancarlo Stanton and Houston’s Jose Altuve.

The Phillies underperformed during the second year of Mallee’s tenure. The team ranked 23rd in baseball in slugging percentage, 18th in on-base percentage, 23rd in homers and 19th in runs at the time of his mid-August dismissal.

Despite the difficulty his former coach had in Philadelphia, Maddon endorsed Mallee after his firing, calling him “an outstanding hitting coach.” Mallee appeared to balance analytics with an old-school mindset, an approach that Maddon espoused during his introductory news conference at Angel Stadium last week.

Mallee could provide a needed boost. While major league records in home runs and strikeouts were set, the Angels stuck to a contact-first plan and put bat on ball 78.8% of the time. Only two teams — the AL champion Astros and World Series champion Washington Nationals — were better than the Angels in that category. The Angels also struck out the third-fewest times (1,276).

Still, the Angels struggled to get on base. They ranked 10th in the American League in batting average (.247), seventh in on-base percentage (.324) and ninth in on-base-plus-slugging percentage (.746). They hit the sixth-fewest home runs (220) in the league.

Surprise performances from first-time All-Star Tommy La Stella, Calhoun, a healthy Albert Pujols and waiver-claim Brian Goodwin lifted the Angels. So did the consistency of second-year player David Fletcher, who emerged as a Gold Glove finalist at third base while hitting .290.

But stints on the injured list created quagmires. Shohei Ohtani missed the first 34 games recovering from Tommy John surgery and endured multiple slumps. Justin Upton hurt his toe days before the start of the season. Lower body ailments claimed half of his season. Gold Glove candidate Andrelton Simmons appeared on track to earn his first All-Star nod before sustaining a severe, season-altering ankle sprain. A nerve issue in Mike Trout’s foot cut short what could end up being his third MVP campaign.

The Angels must decide by early next week if they will pick up the $14 million option on Calhoun’s contract or buy him out for $1 million. With top prospect Jo Adell advancing to triple-A and Goodwin proving capable of starting in the outfield, it seems most likely Calhoun, a Gold Glove candidate in right field, will get the chance to test the free agent market. … The Angels’ first move of the offseason brought in journeyman pitcher Parker Markel, 29, who had a 7.77 ERA as a rookie with the Seattle Mariners and Pittsburgh Pirates. The Angels acquired him from the Pirates on Thursday for cash.