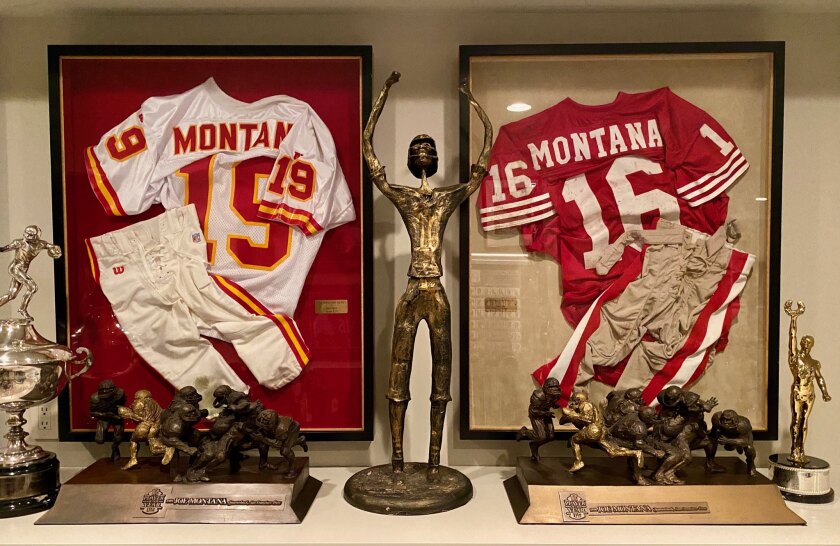 With those teams facing each other in Super Bowl LIV, the Hall of Fame quarterback feels a strong connection to both franchises.

Yes, he won four Super Bowls with the 49ers. But they traded him to Kansas City, he helped guide the Chiefs to the AFC championship game in 1993, and he’s still revered in that city.

And then there’s a third team.

“Here’s how it goes,” Montana said by phone Monday. “I played in San Francisco, played in Kansas City, but I grew up in Pittsburgh when they were winning Super Bowls when I was a kid. So you can add the Steelers to that list of confusion. In fact, I actually tried to go to Pittsburgh before I got to Kansas City. Tried to just go home.”

Make no mistake, Montana is happy about the Feb. 2 matchup on the NFL’s biggest stage. He plans to be in Miami during Super Bowl week, making various appearances, and will stay for the game, which some people already are calling the “Joe Bowl.”

“I think the two best teams got in there,” he said. “San Francisco is pretty sound. They’re an old-school team that runs the ball. They’ve got a great defense. When you look at Kansas City, their defense has improved over the weeks, but their offense is crazy.

“[Chiefs quarterback] Patrick Mahomes isn’t somebody where you say, ‘I want to make him move in the pocket,’ ” Montana said. “Well, I’m not sure you want to do that. He’s one of those guys that’s pretty special and tough to defend. He’s going to make plays somehow, some way.”

“You can ask Danny,” Montana said, referring to legendary Miami Dolphins quarterback Dan Marino, whose team lost Super Bowl XIX to San Francisco, 38-16. “When you take a look at it over the years, defenses typically win it. Danny was having a tremendous year when they played us. And our defense, [49ers safety] Ronnie Lott thinks that was the best defense of all the years. He actually thinks it was the best team we ever had.”

Defense leads the way for this season’s 49ers too, including in Sunday’s lopsided victory over Green Bay.

As for 49ers quarterback Jimmy Garoppolo?

“They’ve put him in good positions,” Montana said. “Everybody’s talking about his interceptions, but for a quarterback, interceptions are part of the game. He’s done what he’s had to do.

“When he has to throw it, he throws it. Does he care if he throws it six times a game? No. He’s here. He’s going to the Super Bowl, and they’ve got a great chance of winning. He’s doing everything they’re asking him to do. He’s fit into [coach Kyle Shanahan’s] system, and he obviously has a great understanding of it.”

Montana, who along with his wife, Jennifer, spent Monday morning walking the hills of the city with their granddaughter, was at home watching the championship games.

Like millions of football fans, they marveled at the play of Mahomes and, in particular, his wild 27-yard touchdown run at the end of the first half against Tennessee. On that play, the Chiefs quarterback darted up the sideline before cutting back toward the middle of the field and diving into the end zone.

“The funny part is, if you did that years ago and you didn’t run out of bounds, then the next time you ran the ball, they’d make you pay for it,” Montana said. “Like everybody else, I said, ‘Oh, shoot, he’s going to go out of bounds.’ Then he stayed in and then everybody’s trying to catch him.”

Jennifer Montana called Mahomes her second-favorite quarterback ever, because he’s so much fun to watch. What’s more, the Montanas still have a deep affinity for Kansas City.

“I thought it was great,” Joe said. “We had a great experience from the people, to the fans, to the organization, and the teammates — oh, my god — we had a great team. Still have friends from that team. We blew the second-to-last game of the year [at Minnesota] and had to go to Buffalo to play, instead of Kansas City. That probably cost us the Super Bowl.”

The Chiefs wound up as the third seed, and had to beat Pittsburgh and the Houston Oilers before the title game against top-seeded Buffalo, a team Kansas City had beaten during the regular season.

Montana was knocked out of that championship game with a concussion when he was sacked on the third play of the third quarter. The Bills went on to win, 13-7, and Montana started to contemplate life after football.

“That concussion really put a damper on things going forward after that,” he said. “I’m looking at life after football, more so than anything. It wasn’t even a bad hit; I just hit somebody’s knee as I was falling. Starts making you think about the rest of your life with your four kids, and Jen, and I’m trying to keep up still.”

But he would return for the 1994 season, and directed his team to victories over the John Elway-led Denver Broncos, and the 49ers with Steve Young.

The actual games aren’t Montana’s most vivid memories from those two seasons in Kansas City, but the feeling of Arrowhead Stadium.

“The thing about Kansas City, it doesn’t matter whether they’re winning or losing, that fan base is ridiculous,” he said. “Over the years, I don’t think that stadium’s ever been empty. Those people there support that team and that organization like none you’ve seen.

“And it is so loud. Even after 50 years, they’re still in there screaming every week. That fan base is probably one of the best in the NFL, one of the hardest places to play for sure.”

He recalled coach Marty Schottenheimer pulling him aside before his first game at Arrowhead and telling him to prepare for a volume he’d never experienced.

Montana said that from field level, the roar was unbelievable.

“The thing that gets you is the whole stadium, when they sing the national anthem, is when they say, ‘And the home of the … Chiefs!’ ” he said. “Still makes your hair stand up on your arms.”

Of course, he has a treasure trove of memories from his years in San Francisco. That’s his home, and his love for it hasn’t faded. He’s synonymous with the Bay Area, and Kansas City amounted to little more than a blip on his career timeline.

“It’s hard to pick between,” he said. “Yeah, we live here in San Francisco, so there’s a little bit of a different feel, just because you don’t have that touch with Kansas City all the time. But there’s a place in my heart for them both. Kansas City was so good and accepting of us coming in there. It’s not easy, and there’s a lot of expectation.

“But like Jen says, I’m guaranteed my team will win.”