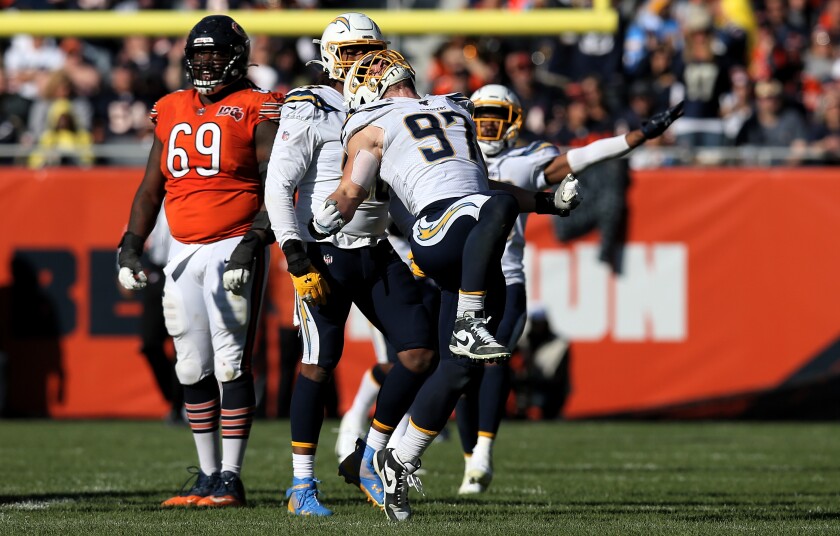 Joey Bosa now playing at a higher level? ‘I’ve been playing like this all year’

He has had four sacks and 13 tackles the past two weeks combined, Joey Bosa elevating his play at a time when his team is trying to scramble back to .500.

But after helping lead the defense in a 17-16 victory over Chicago on Sunday, Bosa said he thinks his play has been elevated a lot longer than that.

“I think I’ve been playing like this all year,” he said. “Sacks are tough stats. A lot of things need to happen for you to get a sack. The D-linemen need to get a push up front so the quarterback can step up in the pocket. He needs to hold onto the ball. Blah, blah, blah.

“These last two weeks, they’ve definitely dropped back and passed more, so I’ve been able to get into a little rhythm. But I came out of a few games this year with no sacks thinking I should have gotten a couple.”

Bosa has had two sacks in each of the past two games, getting to Tennessee’s Ryan Tannehill and Chicago’s Mitchell Trubisky.

He’s the first Charger with back-to-back games of at least two sacks since 2010, when linebacker Kevin Burnett did it.

A Pro Bowler in 2017, Bosa missed the first nine games a year ago because of a foot injury.

When he returned, he was effective but also limited because of the time he was out and the lingering impact of the injury.

Healthier now, Bosa has been flying around the field similar to how he did two years ago. His sack total of seven already is more than he had last season. His career high for sacks is 12.5, which came in 2017.

Bosa has a year remaining on his rookie contract. If he manages to reach free agency and is playing like this, he will become one of the league’s highest-paid players.

“It feels great,” Bosa said of winning a game late. “That’s the story of our life around here. We had the pieces to do it. We’ve had all the injuries. It’s always a close game. Sometimes, it doesn’t swing our way, but it did today.”