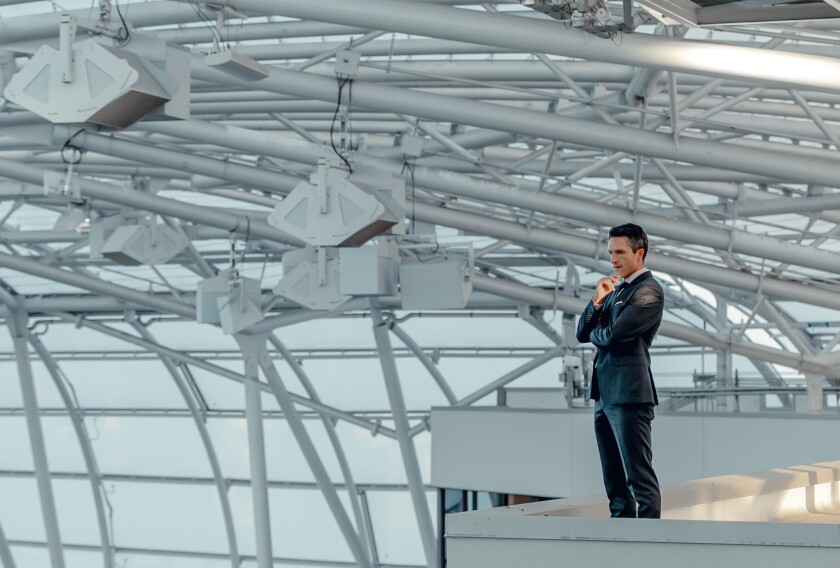 Two years ago, John Thorrington was a general manager with very little to manage.

His team had no uniforms, no stadium, no training fields and just one first-team player. The team didn’t even have an office, so Thorrington worked from a borrowed cubbyhole on the third floor of a building in West Los Angeles.

Twenty-four months later, he presides over the best regular-season team in MLS history. In just its second year, LAFC broke the league record for points with 72, equaled the single-season best with 85 goals and outscored opponents by 48, shattering the record in that category as well.

As a result, LAFC (21-4-9) will take the field for Thursday night’s Western Conference playoff semifinal against the Galaxy favored to win the MLS Cup, a championship game it could play at home in arguably the league’s best stadium before the most raucous fans. But first it will have to get past its crosstown rival, a team it has never beaten.

“It’s a Cinderella story, truthfully,” said owner and executive chairman Peter Guber, who knows a little about fairy tales having spent a lifetime producing some of Hollywood’s most enduring movies.

And his soccer team came together just like many of those films.

“Even in the movies, you’re putting together not just a script,” Guber said. “All the people on the set, that helps create the culture, the environment for special good fortune to shine on you.

“That was our business plan — the culture. We looked for people that certainly had the aptitude, but we really focused on their attitude.”

You want star power? With a hat trick on the final day of the regular season, LAFC captain Carlos Vela — the first player Thorrington signed — set an MLS record with 34 goals. A wise and steady director? Bob Bradley, a former World Cup manager and the only American to have coached in the English Premier League, is going for his second MLS title with LAFC, the first having come 21 years ago with the expansion Chicago Fire.

Yet it’s really been the ensemble cast that has turned LAFC into a blockbuster. It was the people, not the process, that allowed the team to make history.

“There are a lot of lessons from sports that you can take to other businesses. But there are also lessons you can take from other businesses to sports,” said Bennett Rosenthal, co-founder of the private equity group Ares Management and a co-managing owner of LAFC. “We focus so much on the culture of the club. It’s all about hiring great people with great integrity who are all aligned and excited about the mission.

“We couldn’t have come in with the expectation that we would have the greatest record of all time. We set ourselves a high bar, and I think we’ve exceeded it.”

Notice he said nothing about experience. From the beginning, Guber and his unwieldy investor group, which has grown to 31 co-owners, decided to ignore the blueprint other fledgling teams have followed and use a different model.

“Because we had no legacy, no systems, we had to, by definition, create everything,” said Tom Penn, a former criminal defense attorney, NBA executive and TV analyst who became team president despite having no background in soccer.

It’s a model Guber, also part-owner of the Dodgers and Golden State Warriors, has won with before.

When Guber and Joe Lacob, a Silicon Valley venture capitalist, took over the Warriors in 2010, the team had had just two winning seasons in the previous 16 years. Guber hired a former agent named Bob Myers as his general manager and made Steve Kerr, a former player and NBA executive, his coach, and the Warriors have played in the last five NBA Finals, winning three of them.

Guber was also an early backer of Dave Roberts, who had one game of managerial experience, to replace Don Mattingly in the Dodgers’ dugout. Under Roberts, the team has won four division titles in a row and played in two World Series.

“What I noticed from Day 1 about this organization is that we are not afraid to challenge convention,” said Thorrington, who played professionally for 17 years in four countries but had never built a team before becoming LAFC’s first general manager. “Real change doesn’t come by doing what’s already been done just a little bit better.

“That was the beauty we had: It was a clean slate. The organization took that as an opportunity to really think differently about what we wanted to be and how best to achieve it.”

Born in South Africa, the son of a world-class 400-meter runner who was denied a chance to compete in the Olympics because of apartheid, Thorrington, 40, was a two-time CIF Southern Section player of the year at the Chadwick School in Palos Verdes before leaving after his junior year to sign with English giant Manchester United.

He never played a game there, but the experience was life-changing just the same.

“I received very good advice when I went to Man United,” Thorrington said. “A mentor of mine just said make sure you’re taking a lot of notes. So that’s been a habit of mine. I’m a copious note-taker still to this day.”

Four years later, while he was playing for third-tier Huddersfield Town, Thorrington’s career took another detour. The club was headed toward bankruptcy, and Thorrington volunteered to represent the players’ union in ultimately unsuccessful negotiations.

“I decided then that I needed to learn more about the business side,” he said. So he gave up plans of coaching to pursue an MBA from Northwestern’s Kellogg School, then served as a special assistant to the MLS Players Union.

He joined LAFC in December 2015, giving him more than two years to prepare for the team’s first game. He used the time well, interviewing about half a dozen coaching candidates before settling on Bradley, who had taken the United States to the 2010 World Cup and nearly took Egypt there four years later.

Two weeks later, Thorrington signed Vela and the team’s template began to take shape. Next, he traded for center back Walker Zimmerman, selected goalkeeper Tyler Miller in the expansion draft and signed Uruguayan teenager Diego Rossi to play alongside Vela.

Zimmerman has become a regular for the U.S. national team, Miller has won more games than all but one MLS keeper the last two seasons, and Vela and Rossi, with 50 goals this year, are the most prolific goal-scoring tandem in MLS history.

“He’s really a talented executive. Wise beyond his years,” Penn said of Thorrington. “He’s been outstanding in his player acquisition.”

Next, ownership built those players a $350-million home — the most expensive soccer-specific stadium in the league — next to the Coliseum. Thursday’s playoff game will mark the team’s 36th consecutive MLS sellout there. Demand for tickets to the playoff game is so high that the asking price from some seats topped $3,500 on the secondary market Monday.

“It’s been a very symbiotic relationship between the team and the coaches and the fans,” said Larry Berg, a private equity investor with Apollo Global Management and LAFC’s lead managing owner. “It’s a combination of things that all come together and turns into something special. I don’t think I can put my finger on one thing.”

The final scene of the movie hasn’t been filmed yet, so there’s no guarantee it will end happily. LAFC needs three wins in the next three weeks for a league title, and history is against that: Only three teams since 2002 have finished an MLS season with the best regular-season record and an MLS Cup trophy.

But Guber insists that just getting this far in two seasons has validated the team’s approach. So even if the hero dies before the credits roll, there’s sure to be a sequel.

“It’s already been a successful year. Beyond our wildest dreams,” he said. “But not beyond our expectations. We expected to be successful. That was our intention.

“Putting this whole thing together, it’s like winning the grand prize at Cannes or winning an Oscar. I’ve done those things, so I know what it feels like.”