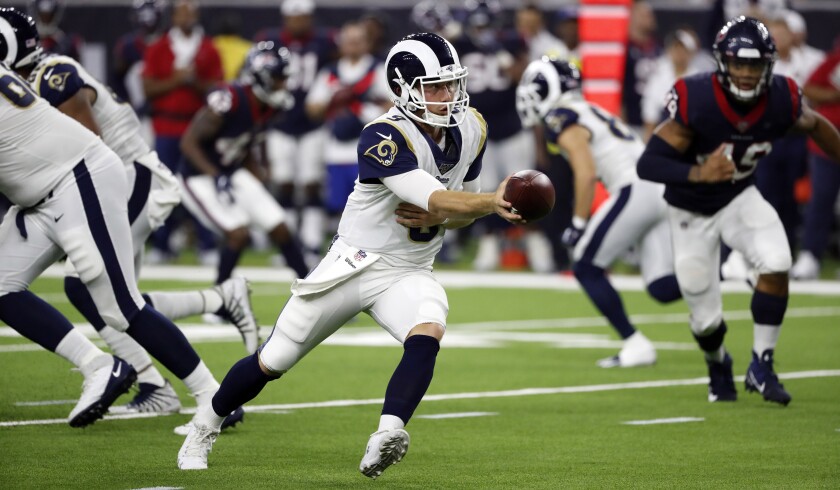 This week Wolford is Lamar Jackson.

Wolford, the Rams’ practice-squad quarterback, is playing the role of Jackson on the scout team as the Rams prepare for Monday night’s game against the one of the NFL’s hottest teams and their MVP-candidate quarterback.

“He’s extremely talented and smart,” Wolford said of Jackson. “He seems like a leader … an incredibly likeable guy.

“So a lot of respect for him.”

In 2017, Wolford was a senior at Wake Forest. Jackson was the reigning Heisman Trophy winner for Louisville.

In an Oct. 28 game at Wake Forest, Jackson completed 27 of 44 passes for 330 yards and a touchdown, with an interception. He also rushed for 161 yards in 27 carries and three touchdowns.

But Wolford completed 28 of 34 passes for 461 yards and five touchdowns, without an interception, and also rushed for a touchdown in a 42-32 victory.

“That was the best game of my career,” said Wolford, who had lost against Louisville and Jackson the previous two seasons.

Jackson was selected by the Ravens with the final pick in the first round of the 2018 draft.

Wolford was not drafted. He was about to start a job with an investment banking firm when the New York Jets offered him a spot for training camp. He played in one preseason game before he was released, and then signed with and played well for the Arizona Hotshots of the Alliance of American Football, a league that went out of business after eight games.

The Rams signed Wolford in April, released him at the end of the training camp but quickly re-signed him to the practice squad.

“I look back to last year at this time — I was working part time at a private equity shop and working out,” said Wolford, 24. “Now I’m playing for the Rams.

“So, I don’t take it for granted and just try to improve incrementally every day. That’s the goal. I never get complacent, and I’m just loving it.”

The Rams defeated the Chicago Bears last week to improve their record to 6-4 and remain in playoff contention. Jackson presents an altogether different challenge for the Rams defense.

The 6-foot-2, 212-pound Jackson has passed for 19 touchdowns and rushed for six for a team that is 8-2 and riding a six-game winning streak.

On Monday, Rams coach Sean McVay said he and his staff were discussing whether to use a player other than a quarterback to emulate Jackson.

“It’s hard to find somebody that has the skill set, in terms of the athleticism, to put the pressure on your defense, but then can also throw the football,” McVay said. “Typically you would like to say, ‘All right, is it maybe even something where you explore a really unique athlete that can throw it?’

“Because you don’t want it to be so predictable if you just put a guy in there.”

Ultimately, the staff decided the 6-1, 200-pound Wolford was the best fit.

“We’ll see if he found some extra speed this week too,” McVay joked.

Wolford said he studied tape of Jackson and the Ravens offense to give Rams defensive players the best look he can provide.

“They do some awesome things with motion and shifts and the way they use their tight ends,” Wolford said.

He put that knowledge to use on the practice field.

“The thing I’m focused on is trying to make it as realistic as possible, the way he reacts if the first receiver, second receiver, third receiver is not there and he’s scrambling,” Wolford said. “I’m going to try and simulate that, so that’s in the back of my mind.”

Jackson is a master at executing zone-read plays, an element Wolford also is attempting to show the Rams defense.

“I’m not as fast as he is,” Wolford said, “but I’m just trying to simulate the looks so that when they get out on the field there as ready as they can be to play against a great player.”