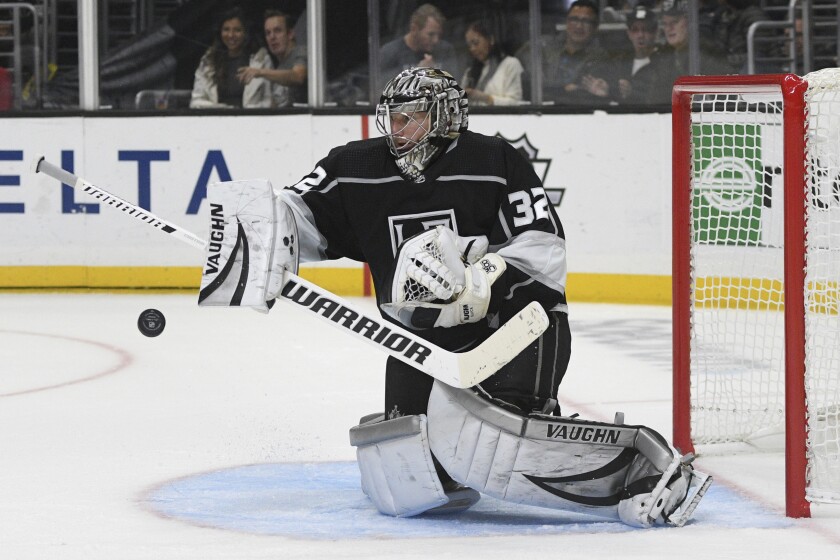 Dylan Larkin flashed in front of the net, angling his stick like a ramp to lift the puck off the ice. It was a nearly perfect redirection from the Detroit Red Wings’ forward, a deft deflection labeled for the upper corner of the net.

The Kings’ goalie — much-maligned for his mighty struggles early this season and quietly overlooked in his return to form since — flicked his glove in the air and snatched the puck away, perfect positioning and a poised presence producing the type of highlight-reel save that has marked his storied career.

Quick wasn’t challenged often on Thursday night, facing only 21 shots in the Kings’ 3-2 overtime win against the Detroit Red Wings at Staples Center. But when he was — Larkins’ first-period tip included — he delivered, helping the team earn back-to-back wins for the first time in almost a month.

“He’s a little more comfortable, confident,” McLellan said of Quick, whose save percentage moved above .900 for the first time this season. “He looks the way he should.”

Statistically, October was perhaps the worst month of Quick’s career. In eight games, he had a .858 save percentage and 4.55 goals-against-average — both career-worsts for months in which he played at least five games — and allowed at least five goals on five occasions.

Part of it, McLellan claimed, was a symptom of the Kings’ overall dysfunctional play.

“His game wasn’t as poor as we think it was at the beginning of the year,” McLellan said. “We were leaking chances, long chances, quite often. We were giving up goals one after another.”

But there was blame to be placed at Quick’s feet too.

“It wasn’t like he was giving up bad goals,” Kings goaltending coach Bill Ranford said. “He was just giving up too many.”

Ranford cited Quick’s issues as more mental than technical. The two-time Stanley Cup champion was reacting to plays instead of reading them, often leaving him out of position. His results suffered.

“Things weren’t going right, and he started thinking too much,” Ranford said. “When you start thinking, things don’t happen the way you want. You’ve got to let the game come to you. We just kept going back to the fundamentals.”

November has seen Quick start to look like his normal self again. For the first time since last February, he has allowed three goals or fewer in four straight games.

“I feel much more comfortable with him in there now,” McLellan said earlier this week. “He’s calm, quietly making quality saves time and time again … He made a lot of those saves when I was down the road [coaching San Jose], often against our teams.”

Against the Red Wings (7-12-2), Quick was hardly at fault for either of Detroit’s two goals. Tyler Bertuzzi negated Anze Kopitar’s first-period goal with a wrist shot on a two-on-one break, then struck again early in the third by deflecting a shot from the slot following a Kings’ defensive zone turnover.

After that, however, Quick shut the door, stopping his final eight shots while the Kings (7-11-1) staged a comeback. With less than two minutes remaining, Adrian Kempe (returning from a healthy scratch on Tuesday) buried a backhanded rebound to tie the game. In overtime, Alex Iafallo scored after a wide shot from the point hit the glass behind the net and bounced to him in front.

At the other end of the ice, Quick took off in a sprint, indulging in only his fourth victorious celebration this season — a rare emotive moment from the stoic, serious, and at times surly shot-stopper who, for the time being, has found his game again.

“He’s saving us in every area,” Iafallo said. “He’s a role model. He’s pretty calm and collected all around. It’s good for us to see.”