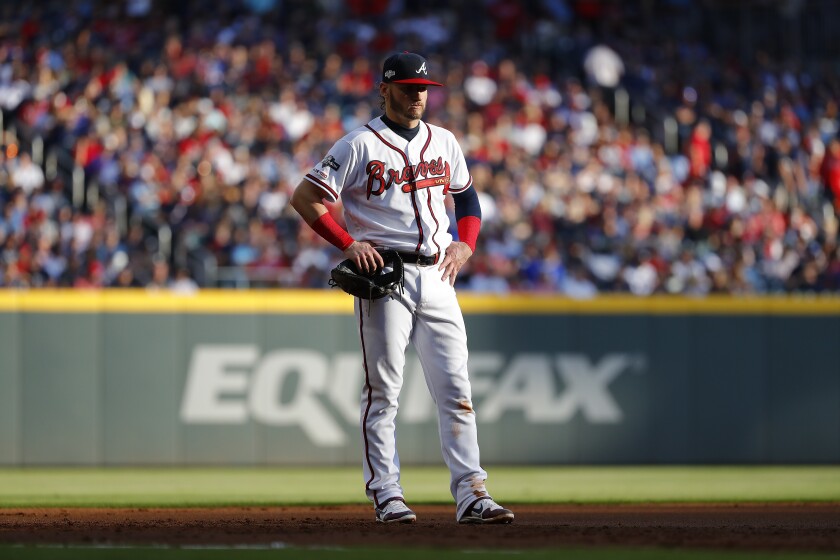 Josh Donaldson, who was among the top free-agent targets of the Dodgers entering the off-season, reportedly agreed to a four-year, $92-million deal with the Minnesota Twins on Tuesday, leaving the Dodgers little choice but to pursue a trade if they are to make any significant upgrades to their club.

Donaldson, 34, was considered the last elite free agent on a market once teeming with stars, and a bounce-back season in which he hit .259 with 37 homers, 94 RBIs and a .900 on-base-plus-slugging percentage for the Atlanta Braves drove up the price tag on the veteran third baseman.

Several teams were reportedly willing to approach the $100-million range for Donaldson, though it is not known whether the Dodgers were one of them. The Braves, Washington Nationals, Texas Rangers and Philadelphia Phillies also expressed interest in Donaldson.

The Dodgers’ pursuit of Donaldson and free-agent third baseman Anthony Rendon was serious enough that Andrew Friedman, the team’s president of baseball operations, spoke with third baseman Justin Turner in November about the possibility of switching positions next season.

Rendon subsequently informed the Dodgers he did not want to play for them, and the team did not submit a formal offer. Rendon signed a seven-year, $245-million deal with the Angels in December.

Donaldson, the 2015 American League most valuable player and 2019 National League comeback player of the year, battled calf and shoulder injuries in 2017 and 2018, when he was limited to 165 games, before reestablishing himself on a one-year, $23-million contract with the Braves in 2019.

He would have teamed with Turner to give the Dodgers two potent right-handed sluggers to complement their array of premier left-handed batters that includes Cody Bellinger — the reigning NL MVP — Max Muncy and Corey Seager.

Donaldson would have also provided solid defense and helped fill the veteran leadership void created by the departures of David Freese and Russell Martin.

But Donaldson’s deal with the Twins, which reportedly includes a fifth-year option that could push the total value to $100 million, means the Dodgers were shut out of the high-end free-agent market again.

Since Freidman took over in October 2014, the Dodgers have not given a free agent from another team a contract worth more than the $55 million they guaranteed outfielder A.J. Pollock before 2019.

They offered ace Gerrit Cole an eight-year deal in the $300-million range, but the right-hander signed a nine-year, $324-million deal with the New York Yankees. The Dodgers’ only significant moves this winter have been the signings of free-agent reliever Blake Treinen to a one-year, $10-million contract and free-agent left-hander Alex Wood to a one-year, $4-million deal which could reach $10 million with incentives.

The Dodgers have been linked to the Cleveland Indians in trade talks for shortstop Francisco Lindor and the Boston Red Sox in trade talks for right fielder Mookie Betts, the 2018 AL MVP and the 2016 AL MVP runnerup, and veteran left-hander David Price, the 2012 AL Cy Young Award winner.

The Dodgers, who have won seven NL West titles in a row but are still searching for the first World Series championship since 1988, are still about $23 million below the $208-million competitive balance tax threshold, according to RosterResource.com.

Talks with the Indians reportedly hit a snag because of Cleveland’s insistence on acquiring top Dodgers infield prospect Gavin Lux. The Red Sox are reportedly searching for salary relief after carrying baseball’s highest payroll for the past two seasons.

But a deal for Betts and Price could cost the Dodgers a combination of top prospects and young major leaguers while adding roughly $60 million to their CBT payroll unless Boston is willing to assume a significant portion of Price’s salary.