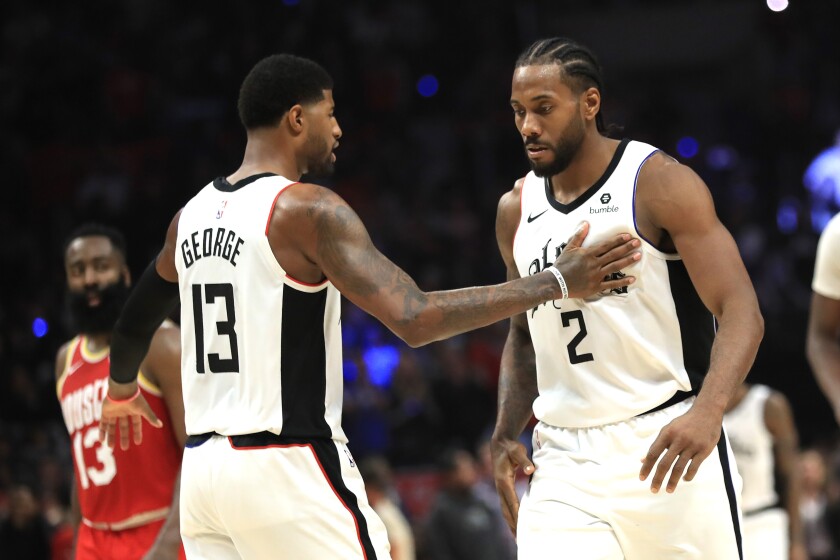 Two nights after closing a victory with a block, Kawhi Leonard capped another Clippers rally with a bucket, a fist pump and a deflection.

Leonard drove right on Houston’s P.J. Tucker, pivoted to find room and lofted an 18-foot, go-ahead jumper with 15.4 seconds remaining Friday at Staples Center to all but seal a second consecutive wild victory, 122-119, that featured a 10-2 Clippers run in the final minute.

With 1.2 seconds remaining, Leonard delivered the win as one of three defenders attempting to deny an inbounds pass to Houston’s James Harden. The Rockets couldn’t get a clean look at a game-tying attempt.

The victory pushed the Clippers (11-5) to 10-1 at home for the first time in franchise history.

Harden scored 37 points, one off his league-leading average, with 12 assists, and Rockets teammate Westbrook added 22 points in his first game against former Oklahoma City teammate Paul George, who had 19 points, eight rebounds and seven assists.

Leonard scored 24 points, with the two biggest his jumper over Tucker.

The Rockets (11-5) scored on three consecutive possessions with less than two minutes to play in the fourth quarter, but the streak was broken after JaMychal Green got a piece of an attempted put-back by Rockets center Clint Capela with 37 seconds to play and the Clippers trailing by two. The ball squirted into the hands of Leonard, who pushed ahead and found Lou Williams in the corner for a go-ahead three and 118-117 lead with 30 seconds to play.

Officials did not see Rivers attempting to call a time out, standing nearly at midcourt, and Houston coaches were furious he wasn’t assessed a technical foul. Instead of getting possession, the Rockets watched as Williams hit a key three that was part of his 26-point night — with every one of them coming after halftime.

After the game, Clippers coaches welcomed Williams with a call of “LOU!” as he came into the locker room.

The Clippers and Rockets already had met once this season, but when Westbrook began the Clippers’ first offensive possession by hawking George at the top of the three-point arc, it was the first time they’d faced off since their two-year run together in Oklahoma City ended in July after a pair of stunning trades.

Only 16 months before, the duo puffed celebratory cigars together at an Oklahoma house party after George agreed to stay with the Thunder as part of a four-year contract.

Yet one season in, Oklahoma City had crashed out of the playoffs in the first round, and George was being recruited by Leonard to consider joining the Clippers. As free agency opened last July, the Thunder learned George wanted to be traded. They acquiesced, and weeks later dealt Westbrook to Houston too, for a hard franchise restart.

George reiterated fond memories of playing alongside Westbrook, calling him a “heck of a teammate.”

So far, he added, the Clippers have been a better fit.

“Not a lot of people get to say they played back home and honestly I’m hoping that this is the closing of my journey to be able to finish here in L.A.,” said George, who can opt out of his contract in 2021. “It’s a great chapter, great last part of my book, hopefully. And I’m looking forward to doing big things here.”

It continued with Friday’s big win. Trying to answer the Clippers’ 10-2 run, Westbrook fired an open three with 3.9 seconds left. When it clanked off, his former teammate grabbed the rebound and added the final points at the line.