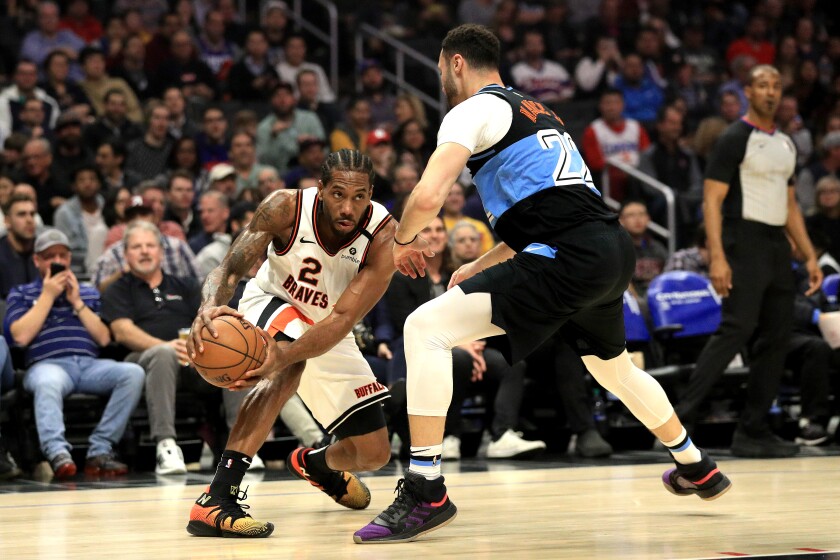 It’s hard to know what exactly this was Tuesday night at Staples Center, a Clippers team getting right after a stretch of uninspired basketball or catching one of the worst teams in the NBA on its second consecutive night of actionin Los Angeles.

Whatever it was — and it was almost certainly a healthy serving of both — the Clippers needed it, looking more like the team people thought they could be than the listless one that’s hovered around .500 for the last month.

A big part of the reason? Kawhi Leonard was at his absolute best, out-muscling and out-shooting anyone the Cleveland Cavaliers put between him and the basket in an easy 128-103 win.

Leonard scored 43 in just 29 minutes, hitting 14 of 22 from the field, six of 10 from three and nine of 10 from the foul line in his most dominant performance of the season.

Finding a signature stretch on a night when he was so consistently lethal isn’t easy, but Leonard’s 15-point second-quarter might have been in. With the game still tight – the Clippers briefly even trailing, Leonard broke things open from deep, hitting four in the quarter while the Clippers’ lead ballooned all the way out to 16.

While most of the quarter was about showcasing his skill, the final play of the first half was all about his strength. With the clocking winding towards zero, Leonard streaked down the middle of the court and split right through Cleveland’s young backcourt, Collin Sexton and Darius Garland, for a dunk and the foul.

If it was just Leonard, the Cavs, who were already in trouble with Kevin Love sitting out the second-night of a back-to-back, might’ve been able to hang in there. But the Clippers’ star was far from alone.

Early in the game it was Patrick Beverley, fighting for rebounds, distributing the ball and getting hot from deep. Center Ivica Zubac was a two-way factor, scoring 12 to go with 10 rebounds on one end while swatting four shots on the other.

And Lou Williams was just as hot as Leonard, hitting 10-of-13 from the floor on his way to 24 points in just 19 minutes. Even Landry Shamet, who the Clippers have struggled to get into a rhythm, sprung free to hit four three-pointers.