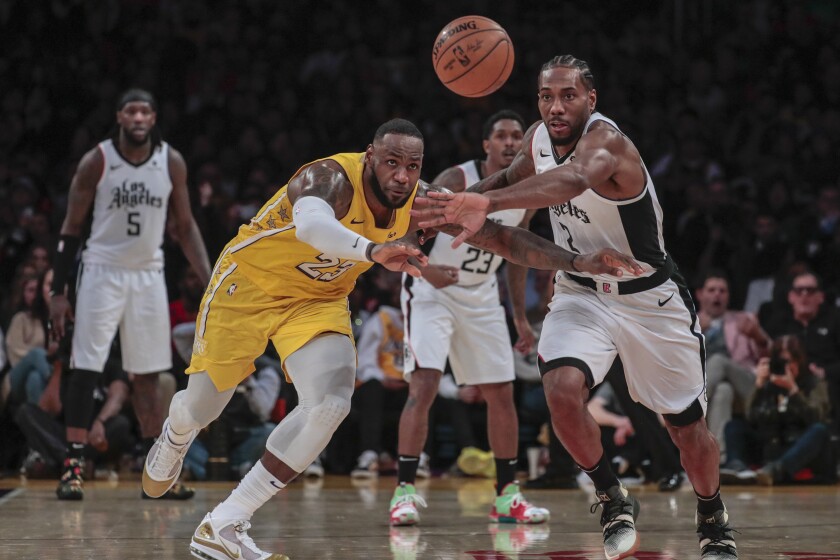 Kawhi Leonard was as unruffled as ever Tuesday night, a New Balance track suit resting easily on his body a few hours after he decimated the Cleveland Cavaliers with an all-time example of efficiency and proficiency — 43 points in under 29 minutes on only 22 shots and 10 free-throw attempts.

He almost always sounds the same, the same levelness to his voice whether he’s fighting the flu or whether his T-shirt is soaked with champagne after winning a championship.

When Leonard discussed where the Clippers are at the midway point of the regular season, it shouldn’t be too surprising that he preached calm.

“Don’t be in a rush to win these games,” Leonard said. “Enjoy every moment of this. Enjoy the process. Use it as a learning tool when we get down in the trenches.”

During his postgame news conference Tuesday, that was a repetitive theme. Enjoy this process, this journey. Balance the present with the future.

“We’ve got a long way to go. We’re going to get there,” Leonard said. “… We just can’t be in a rush. Be patient. It’s hard to win a championship. The pressure isn’t even on us now. We just have to enjoy the process.”

The Clippers don’t look like they are enjoying too much recently, considering the team has been playing .500 basketball for the last month. There’s a sense that the team is underachieving, especially when held to the standards the Lakers are setting down the hall in Staples Center.

Don’t confuse Leonard’s monotone for ignorance. He knows exactly where the Clippers are at right now. After all, the Toronto Raptors were in almost the exact same place one year ago.

Statistically, the numbers are a near match.

Clippers coach Doc Rivers has repeatedly said the Clippers aren’t going to panic. They are in a pretty good position, only half a game behind second-place Utah in the Western Conference. The Lakers were first at 33-7.

Leonard has missed 11 games this season. Last season he had missed 10 by the midpoint. He’s playing two fewer minutes per game with the Clippers and scoring just a tick less — about one point per night. The Clippers are 23-8 when he plays; last season Toronto was 22-10. His three-point shooting percentage in the two seasons is exactly the same — 36.2%.

None of this is to say the Clippers are destined to the same fate as the Raptors last season. It is a reminder that they’re on the same path.

“We’re just building. It’s not significant to me that it’s 41 games in,” Leonard said. “We know that we’re halfway through the season. We’ve got to buy in. There’s still a long way to go. You just got to keep your team, like I keep saying, enjoy the moment, enjoy this process, win or lose, and just learn from the past.”

The Raptors made major changes after the midpoint last season — the biggest being the acquisition of center Marc Gasol. The Clippers could have a move in them as well.

As the team has continued to pile up turnovers, Rivers has pointed to the Clippers’ lack of a traditional point guard as a reason. Maybe the team shores that up at the trade deadline, or by signing Darren Collison if he comes out of retirement, or by being active on the buyout market.

The Clippers could also add wing help — Andre Iguodala perhaps — or another big body to bolster their front line.

They also haven’t been able to fully integrate Paul George because of shoulder and hamstring injuries.

Though incomplete, the Clippers aren’t far from where they should be.

It’s “just not being satisfied or happy with where we are today. … Want to be great,” Leonard said, repeating the messages he’s shared with his teammates.

Maybe everyone should listen. He’s been in this position before.