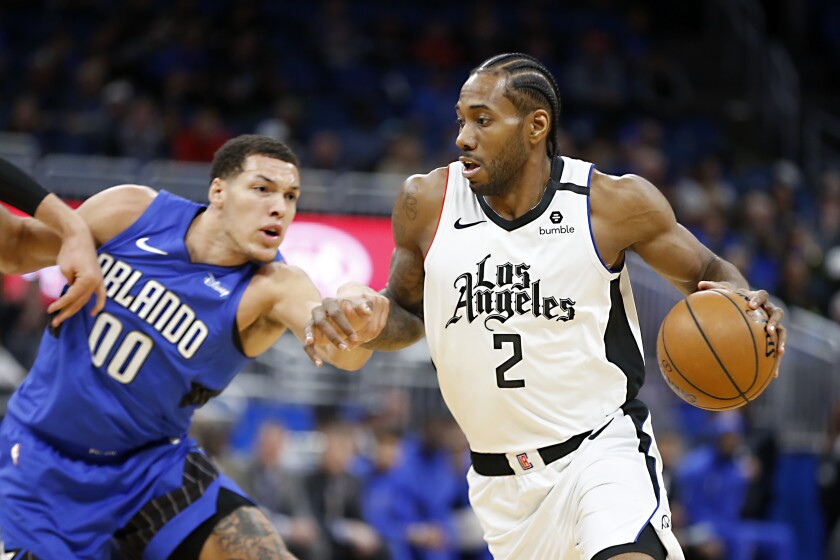 When Clippers coach Doc Rivers watches Kawhi Leonard, he sees hallmarks of other prolific scorers he has coached. The focus. The spatial awareness. The seeming inevitability that Leonard’s points will come.

“He’s Paul Pierce-like,” Rivers said in late January. “There are a lot of great scorers. There are certain guys that just know how to get to their spot, and when they get to their spot it’s a wrap. Kawhi has that ability.”

But the Clippers forward also possessed something unique that Rivers first noticed during practice.

Ever since Leonard’s first game as a Clipper in October, a 30-point outing in a victory against LeBron James and the Lakers, he has displayed the skill set that made him the most sought-after free agent of last summer. Yet nothing has revealed his control so much as his play during the last three weeks, as he has scored a career-high nine consecutive games with at least 30 points.

“He’s playing as well as anyone in the league right now, and he’s doing it all around; it’s not just scoring,” Rivers said. “He’s doing it with his defense, with his passing. The best part of it, it’s coming in the flow. It’s not a forced 30. It’s just ball movement, he’s going downhill, he’s getting his shots, and it doesn’t stand out some nights. You’re looking at a box score like, ‘Wow, he had 30.’ That’s a great sign.”

The run, wihch has boosted Leonard’s scoring average to 27.5, seventh-best in the league, has dovetailed with his improved health and his teammates’ improved understanding of how they fit within the team’s star-dominated offense.

The NBA has said Leonard continues to deal with an ongoing injury to the patella tendon in his left knee, but Leonard said in early January he felt much better than at the start of the season.

“I’m able to jump without it grabbing me too much,” he said Jan. 10 after scoring 36 points to begin his current nine-game streak. “Hopefully I just keep going uphill from here.”

He has indeed, shooting 50.9% on field goals and 39.7% on three-pointers while averaging nearly nine free throws per night in his last nine games. That is in addition to averaging 7.7 rebounds, 5.2 assists and 2.2 steals.

Much of that offense has been created by Leonard himself, with nearly 30% of his shots during his hot streak coming after three to six dribbles. Leonard is shooting 61% on such attempts.

“He’s been different, man,” center Ivica Zubac said with a slow shake of his head. “He’s locked in; he’s focused. When he gets to his spots, you can’t really do anything to stop him.”

That isn’t to say Leonard’s production has been all his doing. To the Clippers, it is no coincidence that Leonard’s run has coincided with more practice time and a healthier lineup.

The Clippers (34-15) also don’t think it is a mistake that Leonard’s run has overlapped with the best stretch of the season for second-year guard Landry Shamet, who has made 44.4% of his three-pointers in his last nine games and scored in double figures each time.

Last season, after Shamet was acquired in a deadline trade from Philadelphia, Rivers called the guard’s off-ball movement a barometer for the team’s offensive success as a whole. As Shamet drew open looks running off of screens or created opportunities for others because of the defensive attention paid to him, the offensive flow tended to improve. That remains the case, Rivers said.

“My teammates are being aggressive,” Leonard said. “I’m able to get open shots off of their attacks and drives. I’m just able to make shots right now.”

If Shamet is still viewed as a gauge of offensive efficiency, his place within the offense has changed. A starter in the postseason last year, he appears more likely to come off the bench than start when the Clippers are at full strength. Like everyone not named George or Leonard, Shamet must find his shots around the margins of an offense geared around two superstars.

“It’s not like we’re going to run a bunch of pick and rolls with Sham,” Rivers said. “He’s got to come with weak-side offense and pin downs.”

It’s why Rivers liked seeing guard Patrick Beverley and Leonard run a few plays specifically for Shamet in Saturday’s victory against Minnesota, understanding that getting Shamet in the flow could benefit everyone because of the spacing he provides.

“I think our guys understand his value more,” Rivers said. “I think they use him more.”

UP NEXT / SUNDAY NIGHT

Update: The Spurs (22-26) won their second straight game Saturday after trailing Charlotte by as many as 19 points in the third quarter. Los Angeles is their first stop on an eight-city trip that, because it is sandwiched around the mid-February All-Star break, won’t see the Spurs play a home game until Feb. 26.