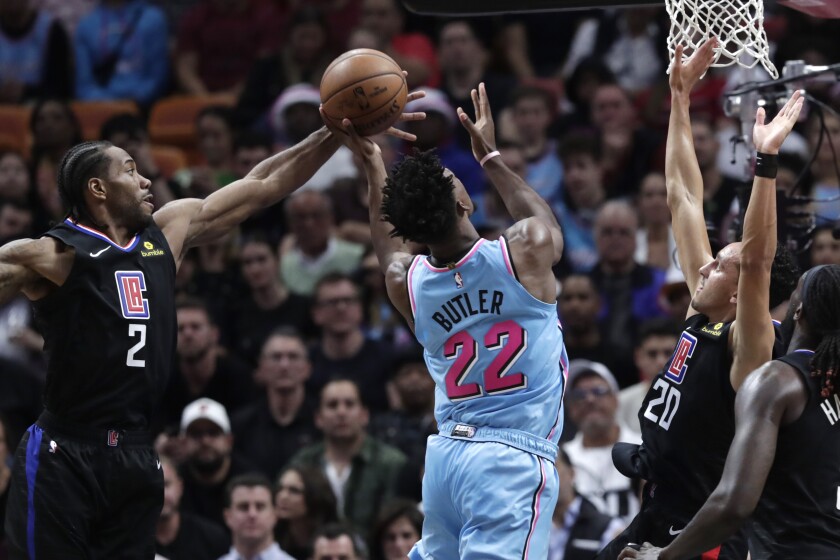 Kawhi Leonard has first triple-double in Clippers’ win over Heat

In a league where shortening the length of the season is a regular discussion topic, games in January are often downplayed as just one of 82.

And yet, neither coach Friday inside AmericanAirlines Arena attempted to minimize the matchup at hand: A Miami team with the Eastern Conference’s second-best record hosting the Clippers, owners of the West’s third-best record.

He felt differently by the end of a 122-117 Clippers victory.

Though leading for much of the game, Miami could not overcome a 15-0 Clippers run to end the third quarter, a personal 8-0 run by Lou Williams to start the fourth and, even on a historic night for superstar Kawhi Leonard, one of the Clippers’ strongest collective games of this season.

Leonard finished with the first triple-double of his nine-year career by grabbing a rebound with 3:52 remaining in the fourth quarter and finished with 33 points, 10 rebounds and 10 assists — the seventh consecutive game he has scored 30 or more points. It was, in fact, the second time of the game he had secured his first triple-double — officials took away a 10th rebound between the third and fourth quarters, leaving him one short until he eventually collected the carom from Heat guard Tyler Herro’s missed three-pointer.

When Leonard made a three-pointer for a 118-110 Clippers lead with 66 seconds to play, many fans began marching toward the arena’s exits. They missed a roller-coaster finish. A high-arching three-pointer by Heat guard Dion Waiters, who was making his season debut, Miami trailed by just three with 34.2 seconds to play.

If the final moments belonged to Leonard, the victory was the product of a short-handed roster that played deeper than it has in weeks.

The Clippers were again without injured starters Paul George and Patrick Beverley and in the first half watched as Leonard missed nine of his 11 shots while often facing double-teams. But his teammates combined to shoot nearly 57% in the opening half, keeping the Clippers within two points at halftime.

Miami was led by 20 points from Jimmy Butler.