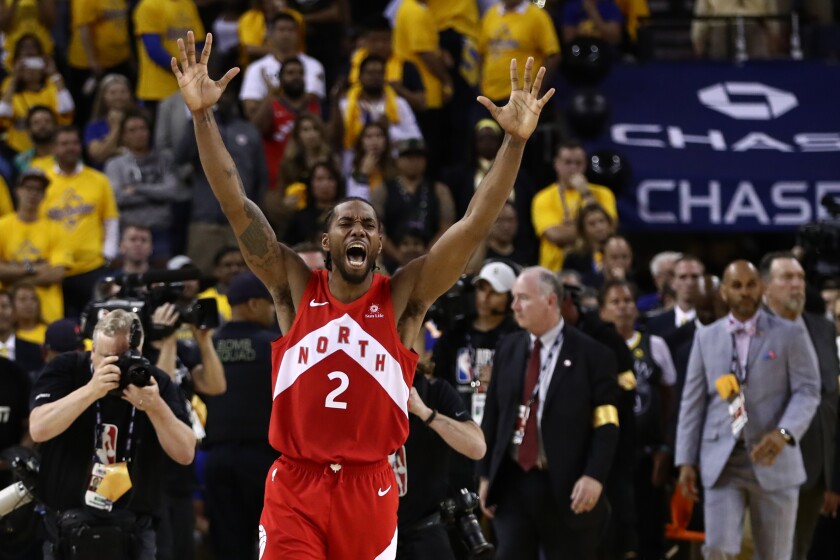 Kawhi Leonard vs. Raptors will be the rarest kind of reunion of a star and his ex

When the Toronto Raptors became the first NBA franchise outside the U.S. to win the championship last June, Mfiondu Kabengele was in Florida.

Wanting to experience the celebration unfolding in Toronto, the city that was a 50-minute drive from his Ontario hometown, the 6-foot-10 center from Florida State grabbed his laptop and logged into a website of a Canadian television provider.

“People were flooding the streets,” Kabengele said, a smile still wide from the memory. “Hanging off the street lights.”

Twenty days and a championship parade later, Kabengele was a Clippers first-round draft pick watching as dozens of fans returned to one Toronto street, in particular, to wait outside a hotel they believed the NBA Finals’ most valuable player, Kawhi Leonard, was inside. They hoped to persuade the Southern California native, who’d led Toronto less than a year after arriving via trade, to stay north of the border instead of leaving as a free agent.

It didn’t work. Leonard chose the Clippers two days later, becoming the first Finals MVP to leave for another team before the following season.

In Canada, “Kawhi is like folklore now,” Kabengele said. “He did his thing one year, gave them everything they needed and then disappeared. It was crazy.”

When Leonard plays against Toronto on Monday at Staples Center for the first time since leaving town, nothing crazy is expected. Leonard still talks with some former teammates and has watched the Raptors during a 6-2 start that has them No. 2 in the Eastern Conference.

“It’s going to be fun to see the guys and just congratulate them and be able to shake hands and compete,” Leonard said Saturday.

Still, the reunion will be unlike any Clippers coach Doc Rivers can remember. Matchups between a player and his former team often can be fueled by hard feelings. Monday is notable for the apparent lack of that. Days after Leonard departed, Toronto coach Nick Nurse said he “can’t blame a guy for wanting to go home.” In August, Toronto point guard Kyle Lowry said he was “happy for him. Truly. I am genuinely happy for him.”

Leonard has told Kabengele he found his year in Canada to be “insane” because of the support he felt from the entire country, which considers the Raptors — Canada’s lone surviving NBA franchise — a de facto national team. It also didn’t hurt that some Toronto restaurants offered Leonard free food as an incentive to stay.

Leonard on Saturday called Toronto “amazing,” and added that he “never went in with a negative mindset” after arriving.

“Playing with Cory Joseph in San Antonio, him being from that area in Toronto, I knew what the city kind of brought, just going out there and playing games, hanging out with him and his friends and him taking me and showing me the city,” Leonard said. “So it was never a negative thing; always open-minded about it.”

Leaving in free agency was in part about what Los Angeles could offer that Toronto could not. For one, he is paired with Paul George, the All-NBA forward who practiced fully for the first time Saturday in anticipation of his likely Clippers debut in the coming week.

The warmth Leonard hoped to feel in playing close to home also has been as fulfilling as he’d hoped.

But with his new team, Leonard has attempted to import a bit of what made Toronto special, teammates say. Just as injuries to Golden State’s Kevin Durant and Klay Thompson helped fuel the Raptors’ title, so did the locker-room trust that began with Leonard.

“Obviously he was ‘Kawhi’ when he was in Toronto, but at the same time he allowed Fred [VanVleet] to be Fred, Pascal [Siakam] to be Pascal, Serge [Ibaka], Norm [Powell], Kyle, the list goes on and on,” said Clippers forward Patrick Patterson, also a former Raptor. “He trusted his team and his teammates to show up and play and he added himself in throughout the course of those playoffs and whole season.

“So bringing that same mentality here, realizing that yeah, he is Kawhi Leonard. He is a championship MVP and all that. But at the same time he can still be himself here. Trust us all, at the same time, to do our parts and help him.”

Should those pieces add up to a Clippers championship, Kabengele will have a much closer perspective than last year.

Inside the Clippers’ locker room, he sits next to Leonard.

“He just loved it over there” in Toronto, Kabengele said. “They got a championship, they made it happen. And now, he’s here now.”